A foreign automaker rethinks an antiquated engine for the ultimate race circuit. 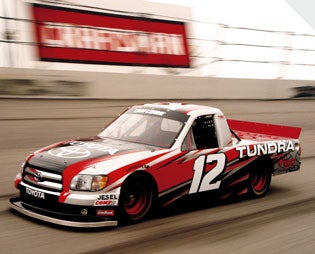 RED, WHITE AND NEW TO NASCAR:: Toyota tests one of its seven tundra trucks before race day at Daytona International.

In becoming the first foreign automaker to crash the emphatically American party of Nascar, Toyota adopted a modern approach to designing a vintage Detroit engine. Nascar’s immense popularity is based in part on rules that promote pure competition by limiting pricey technological innovation. That means 358-cubic-inch V8 engines whose fundamental architecture dates back to the Eisenhower Administration. But this did not stop Toyota from employing the most advanced software and manufacturing tools in the auto industry to design its old-school motor. Call it the highest-tech low-tech engine ever built.

When Toyota decided to enter the Craftsman Truck Series — third in the Nascar hierarchy, behind the Nextel (nee Winston) Cup and Busch Grand National — it found itself in a peculiar predicament. The company hadn’t built the mandated pushrod, carbureted, iron-block V8 since, well, ever. This forced the team at Toyota Racing Development (TRD) — one of the largest racing operations in North America but a Nascar virgin — to start from scratch.

“We told them to take a look around at the engines in the garage,” Nascar R&D director Gary Nelson says. “We said, ?We’re not going to tell you what valve angle to use, for example. But go smaller than the largest and larger than the smallest.'”
In other words, no thinking outside the box.

Trouble is, nobody knew the precise dimensions of that box. “So we had to reverse engineer the Chevy, Ford and Dodge engines,” says Lee White, general manager of TRD. “We measured 3,000 block castings and 2,000 cylinder head castings for each one — 15,000 total.”

The TRD team set out to incorporate the best features of each engine, while hunting for Nascar-legal design tweaks. They used advanced engineering software to calculate stresses on the cylinder heads, plus computer- aided design and stereo lithography to quickly mold plastic parts. All standard in the automotive industry but fairly new to Nascar, these high-tech tools helped TRD build and test engines faster and more efficiently.

There was also a little old-
fashioned design ingenuity. Early on, says David Currier, who led the seven-man design team, it became clear that Nascar’s design parameters for the valvetrain, which helps control fuel intake and exhaust, was the engine’s weak link, as it was conceived to handle a modest 5,000 rpm. To circumvent Nascar’s valvetrain restrictions, TRD minimized the stroke. By shortening the distance traveled by the piston, they ended up with an engine that should spin faster than 9,000 rpm.

After frustrating negotiations with Nascar and nearly $2 million in development costs, TRD has produced the requisite engine, but one with enough subtle innovations to boost performance on the track. TRD technical director Pete Spence believes he has the lightest engine in the series, and he’s experimenting with blocks cast out of compacted graphite to cut more weight.

Daytona is just the first step on a long road featuring 23 more Craftsman races this year. Toyota hopes that a winning Nascar presence will help it reposition itself as an automaker every bit as American as GM and Ford. Look for a TRD engine in the Nascar Nextel Cup in 2006.