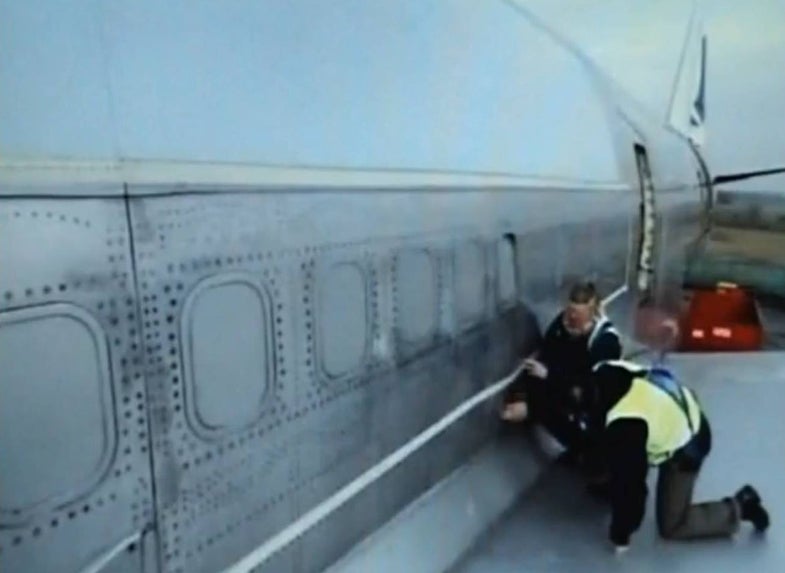 An explosion aboard Flight 253 on Christmas Day would not have crippled the Boeing 747, according to a recent test that simulated the success of would-be bomber Umar Abdulmutallab. Only the bomber and passenger next to him would have died, the BBC reports.

The test plane didn’t quite get away without a scratch, but it only lost some rivets and suffered an outward dent. The flight controls and fuel tanks appeared safe post-blast to Captain J Joseph, an air accident investigator, and John Wyatt, an international terrorism and explosives adviser to the United Nations.

Abdulmutallab attempted to set off an explosion with pentaerythritol (or PETN) aboard Flight 253 from Amsterdam to Detroit. The experts enlisted by BBC recreated the scenario with a decommissioned Boeing 747 at an aircraft graveyard in Gloucestershire, UK.

There’s little doubt that the resulting messy explosion and body parts would have traumatized passengers and ruptured some eardrums, experts said. But they added that people would hopefully take confidence from the aircraft’s structural integrity being intact.

Some BBC readers have questioned if the ground experiment actually replicated what might have happened in the air. But the experts said that Flight 253 had already descended to about 10,000 feet at the time of attempted detonation, and so the difference in pressure inside and outside the plane would not have mattered.

As comforting as this sounds, passengers would probably still prefer that explosives didn’t get through at all. Let’s hope that chemical sniffers, future airport scanners or Wii balance boards can somehow improve the screening process.