The world's oldest lizard-like reptile, with roots dating back to the Triassic period, has been found breeding again for the first time in 200 years 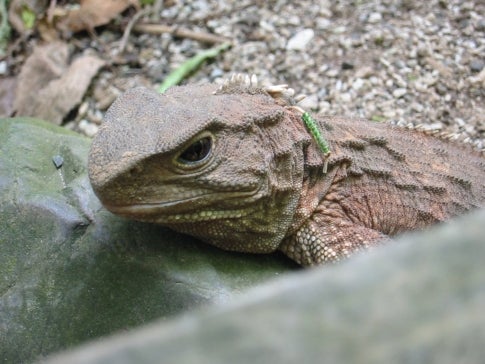 Before the close of this century, the tuatara may lose the first half of its topical designation and become, simply, a fossil. Climate change will be responsible for raising the soil temperature in its remaining island habitats around New Zealand to the point at which female hatchlings cannot survive. After the introduction of rats to the mainland by early explorers, the tuatara's population was set on a course toward extinction. Now its only remaining members there are in a fenced wildlife sanctuary. This cousin of both lizards and snakes is the only remaining member of an order of reptiles stretching back 200 million years. It is perhaps most curiously known for the third eye set on top of its skull, the exact function of which is largely speculative. While it is connected to the brain by a dedicated nerve, the parietal eye is covered with scales and is hidden from view soon after birth, leading some to believe it is responsible for maintaining circadian rhythms. lizardb0y (CC Licensed)
SHARE

He is greenish brown, has dragon scales for skin, grows up to 32 inches and is the world’s last remaining lizard-like reptile that has a lineage dating back to about 225 million years when dinosaurs still roamed the earth—he’s a tuatara and he’s making a comeback. A species native to New Zealand, the tuatara was spotted nesting in a sanctuary close to Wellington last week, the first such sighting in 200 years. Staff at the 620-acre Karori Wildlife Sanctuary stumbled upon four white, leathery ping-pong sized tuatara eggs during routine maintenance work at the end of last week. 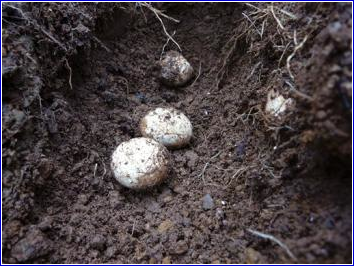 A rare find, the nest is the first concrete proof that tuatara are breeding again, said sanctuary officials of the species that, unlike other reptiles, has two rows of top teeth and a light-sensitive “third eye” on its forehead, which is visible for about six months when it hatches. In an effort to save the species that once flourished in the Mesozoic Era and almost neared extinction in the 1700s because of the introduction of predators like rats, the Karori Sanctuary created 70 tuatara in 2005 and another 130 in 2007, before releasing them into the wild. At the moment, tuatara can only be found living in the wild in 32 offshore islands that have been removed of possible predators.

Sanctuary officials said the eggs were most likely laid a year ago and that there could be more since an average nest usually contains around 10 eggs. If incubated properly, the eggs, which have been left at its original location to avoid any further disturbance, should hatch some time between now and March.