Because your skin is an unused sound jack 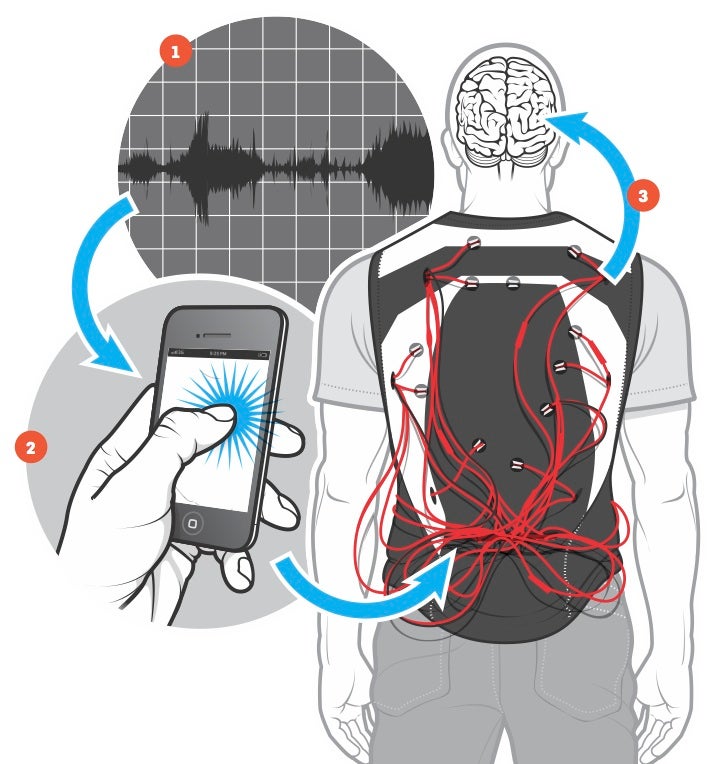 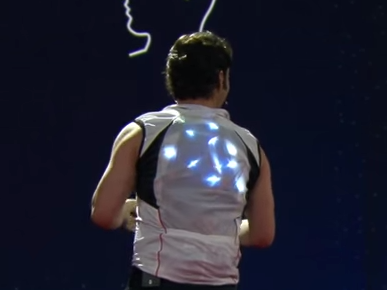 A New Way To Hear

Neuroscientist David Eagleman shows off the VEST at a Ted Talk last year. The device could let deaf people understand audible conversations. Unlike a cochlear implant, it’s noninvasive–and costs only a fraction of the price.

What if our bodies had a new way—other than our eardrums—to hear the world around us?

That’s what neuroscientist David Eagleman wondered five years ago. He looked at the body for answers and saw a huge sound jack. “We have this giant input channel called our skin,” he says, “and we aren’t using it.”

So Eagleman, along with Scott Novich, his then-grad student at Baylor College of Medicine, created the Versatile Extra-Sensory Transducer, or VEST. The VEST system is worn like it sounds. Through 32 tiny motors, it translates sound waves into vibrations on your back.

First, a computer or smartphone picks up sounds from your surroundings and breaks down the audio sample into a set of specific frequencies. Each frequency band in the set triggers one of 32 motors in the VEST. With time and practice, your brain learns to unconsciously interpret the series of vibrations as sound—and individual sounds as words in a language.

“There is no theoretical reason why this can’t be almost as good as the ears,” says Eagleman.

So far, he has trained deaf people to recognize single words through the VEST. He hopes to eventually help them understand sentences, and then full conversations. Just like with language, Eagleman discovered, children—whose brains are more malleable—learned to interpret the VEST more easily than adults did.

Eagleman says his device could one day be deployed in dozens of professions to better understand complex environments. A pilot could interpret a plane’s status through the VEST’s vibrations. An astronaut could literally feel the health of the International Space Station. Eagleman and Novich’s startup, Neosensory, plans to develop the VEST for all kinds of uses so someday we all can experience this sixth sense. “The possibilities are endless for the kind of information we could be streaming in,” says Eagleman.

This article was originally published in the September/October 2016 issue of Popular Science, under the title “Listen with Your Skin.”