To predict a hurricane’s deadliness, CYGNSS will look deep into the eye of the storm 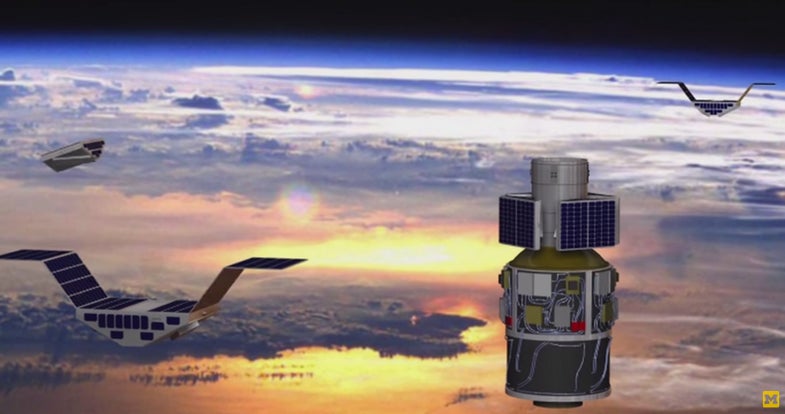 In 2016, eight CYGNSS micro-satellites will ride into space on a rocket. Each one is about the size of a swan, which is where the mission gets its name--in Latin, "cygnus" means swan. University of Michigan
SHARE

Nearly 10 years ago, Hurricane Katrina laid waste to the Gulf Coast. While moving over the warm waters of the Gulf of Mexico, the storm unexpectedly revved up from a Category 3 hurricane to Category 5—the worst possible scenario. With winds faster than 125 miles per hour, Katrina pushed a wall of water three times higher than predicted over Louisiana’s levees, killing 1,833 people and causing at least $80 billion in property damages.

Although the failure of New Orleans’ levees played a significant role in the destruction, part of Katrina’s deadly toll might have been avoided if scientists could better predict how severe a hurricane is going be. “The ability to forecast the track of the hurricane has been steadily improving over the past 25 years,” says Chris Ruf, an atmospheric scientist at the University of Michigan. “But the forecasting for intensity hasn’t really improved at all.”

Fortunately, Ruf thinks he can break that lackluster track record. In 2016, his team will launch eight small satellites into orbit around the Earth’s equator. For the first time, they’ll be able to continuously measure wind speeds in the hellish core of a developing hurricane. Those wind speeds indicate how strong the storm will become.

“Forecasting for hurricane intensity hasn’t really improved at all in 25 years.”

It’s relatively easy to predict where a hurricane will travel, based on the air flow around it. But a hurricane’s strength depends largely on how fast its winds are moving. Hurricanes with faster winds pick up more water. Later, as that evaporated water cools and condenses, it releases heat. “That’s the energy that pumps up hurricanes,” says Ruf, “so if you can track the wind speed, you can track the energy.”

Plenty of weather satellites measure wind speed, but they don’t work so well in the rain—meaning they’re pretty much useless when it comes to seeing into the heart of a hurricane.

Ruf’s constellation of microsatellites, named CYGNSS, gets around that problem in a smart way. It takes advantage of the GPS signals that satellites are constantly beaming down to Earth. Those signals use a longer wavelength than typical weather satellites, which means they can penetrate through rain without suffering too much damage. CYGNSS’s GPS receivers (like the one in your phone) listen in on those signals, and when they bounce back from Earth, the satellites measure how distorted the signal became on the surface. More distortion means a rougher ocean, which means a tougher storm.

“These GPS receivers are really cheap, really efficient, and really low-power,” says Ruf. “That means we can afford a lot of them. And having lots of satellites lets us measure things really often, so we have a really rapid refresh rate on our images of the wind.”

Currently, the only way scientists measure hurricane intensity is by flying planes and drones into the storm. Those hurricane hunting aircraft aren’t always on hand to measure every storm, and they don’t provide continuous monitoring. CYGNSS, on the other hand, will provide nearly global and nearly continuous coverage.

By getting a closer look at the interface between the ocean and the air, scientists will have a better understanding of how hurricanes can suddenly morph from a low-threat storm into a devastating tempest. Eventually, Ruf hopes the data will make it possible to predict whether or not a storm will strengthen, and if so, by how much. That should give communities in the storm’s path more time to prepare and, if necessary, more time to evacuate.

Correction, June 5, 2015: An earlier version of this story implied that Katrina made landfall with wind speeds of 157 miles per hour, when the actual speed was 125 miles per hour. We regret the error. We have also updated the text to underline the importance of the levee failure in Katrina’s wake of destruction, which these satellites could not have foreseen.