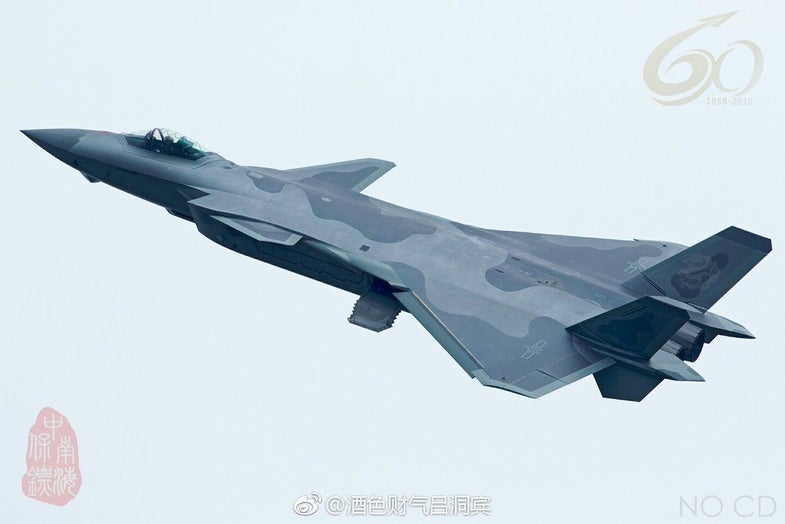 The J-20 is a “fifth-generation” heavy, twin-engine stealth fighter with canards (appendages on the wings that offer greater stability), advanced active electronically scanned array (AESA) radar, and three internal weapons bays for air-to-air missiles and bombs. Similarly to to Lockheed Martin’s F-22 Raptor and Russia’s Su-57 fighters, the J-20 is a high-speed fighter that’s very maneuverable, with capacity for long range and stealth.

Its large size and weapons bay has led many to believe it would also be used for long-range strikes and as an interceptor. It first flew in 2011, and low-rate initial production variants were delivered to the PLAAF’s flight test unit in late 2016.

The J-20 is vast improvement over its fourth-generation counterparts (the J-10 and J-11 fighters, which currently occupy the front line in PLA units), though it will still likely take China’s military a couple years to make full use of the J-20’s advanced radar and stealth.

And, of course, the J-20’s tech will continue to evolve. Around 2021, the J-20 is slated to get new WS-15 turbofan engines, which woudl replace the Russian AL-31FN engines it currently uses. The more powerful WS-15 engines will give the J-20 extra thrust to supercruise (that is, reach supersonic speeds without using fuel-thirsty afterburners) and more energy to maneuver. When that happens, China will further establish itself as Asia’s leading aviation industrial power.