A satellite for the post-Snowden age 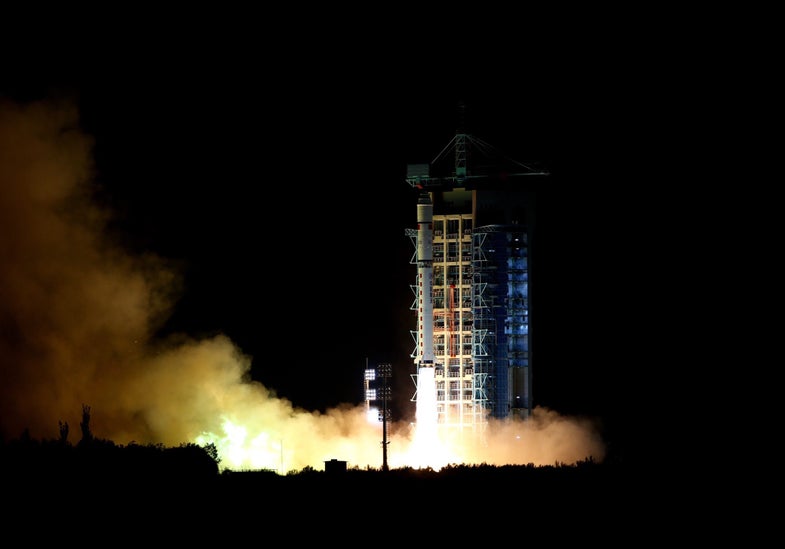 On August 16, 2016, China became the first country in the world to launch a quantum communications satellite, in what it hopes will be a key step to creating an unhackable communications system.

The Quantum Experiments at Space Scale (QUESS) satellite, weighing 500 kg, contains a quantum key communicator, quantum entanglement emitter, entanglement source, processing unit, and a laser communicator. At its orbit 1,000km above Earth, it will transmit quantum keys between ground stations in China and Austria. (The Austrian Academy of Sciences is a partner in this effort, along with research in other quantum technologies like photon teleportation, transmission reduction error, and random number generators.)

Quantum keys are encryption keys (when encryption keys are applied to an encryption algorithm, they decrypt and encrypt information), which are linked to particles that have been entangled at the quantum level. Particles in quantum entanglement share a quantum state that will collapse upon observation. This means that legitimate users of the quantum communications system will notice if they’ve been hacked, from the quantum state collapsing due to another party viewing the transmission.

Additionally, the properties of quantum mechanics make it virtually impossible to reverse engineer a quantum key generated through quantum entanglement. Quantum keys are thus theoretically impossible to crack by even with quantum computing — a theoretical form of supercomputing that promises to defeat traditional forms of encryption. Importantly, though, quantum communications can be compromised by vulnerabilities in physical equipment or personnel or when other forms of communication link into the process.

The launch of QUESS is part of a broader effort to ensure China will be among the world leaders in quantum communications. Plans are to expand an existing quantum communications line between north and south China to include a Sino-European quantum key distribution network in 2020, and a global system in 2030. The success of QUESS would give China a secure communications system immune to eavesdropping and interference, which will have applications in finance, diplomacy, telecommunications and even military and intelligence.