When a satellite runs out of fuel, there are really only a couple options: Quietly become a piece of space... 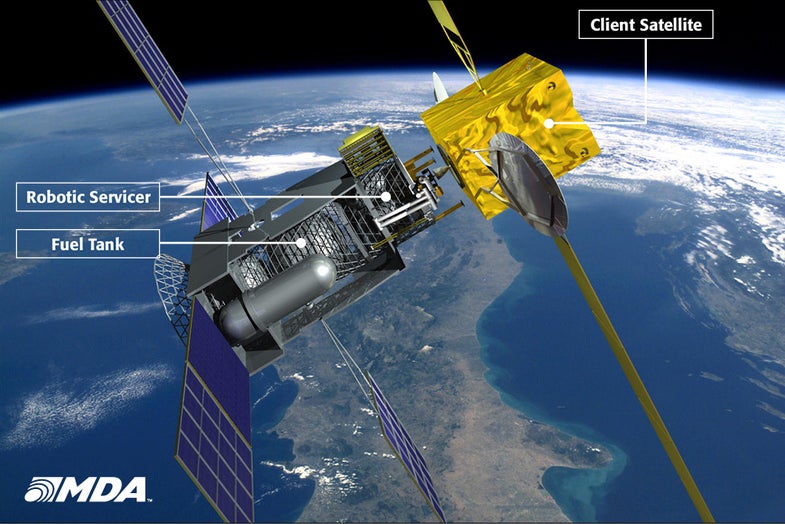 When a satellite runs out of fuel, there are really only a couple options: Quietly become a piece of space junk, or fall back to Earth in a blaze of glory. But a new space gas station will fill ’em up, ensuring satellites can keep on trucking and preventing the proliferation of orbiting garbage.

After years of planning, Canadian company MacDonald Dettwiler and Associates (MDA) announced it is building the first space gas station, with plans for a 2015 launch. The Space Infrastructure Servicing vehicle will fly in geosynchronous orbit, where it can reach several key commercial and government satellites. It will be able to bring them extra fuel as well as reposition them or perform basic maintenance, according to MDA.

The communications satellite company Intelsat, which has the most geosynchronous satellites, will be the first client.

The SIS will launch with a full tank, along with a robotic arm and a tool set to perform basic satellite maintenance. The arm will help the gas station grab other satellites for refueling, but it could also be used as a mechanic, for instance pulling open a jammed solar array.

It could even serve as a tow satellite, moving other spacecraft into a high-orbit graveyard zone or bringing them low enough to reenter the atmosphere and break up.

Most satellites use solar power, but they still need small amounts of fuel like hydrazine to adjust their orbits. The SIS will carry a big tank, but it will only be able to fill up about a dozen satellites before it will need to be replenished. As this video explains, it will move to a polar orbit and a small launch vehicle will rendezvous with it, like a tanker truck filling a gas station.

An orbiting gas station is not a new concept — MDA outlined its plans last year, and the Defense Advanced Research Projects Agency has done it before, with the 2007 Orbital Express mission. Two robotic spacecraft met and transferred fuel in orbit, using a robotic arm made by MDA. But that involved two spacecraft designed to dock together; the SIS will have to pair up with a wide range of satellite fuel tanks.

MDA and Intelsat will start building the satellite in the next six months, and the first space refueling will take place about four years from now.