Dean Kamen-Designed Electric Scooter Concept Can Run on Anything Flammable

An electric scooter in the works from Dean Kamen uses a Stirling external-combustion engine to generate power. Could burning random stuff for fuel be the next wave of transportation? 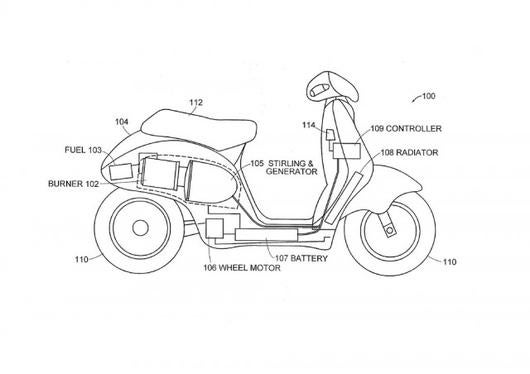 The external-combustion engine predates its internal-combustion counterpart by nearly a century. Internal combustion won out for modern automobiles by way of its more robust production of horsepower and torque. But Segway inventor Dean Kamen is working up several new uses for the venerable Stirling external-combustion engine. The latest is a electric generator that can use almost anything that burns as fuel. It’s the centerpiece of a new hybrid-electric scooter that may never need recharging.

Kamen’s already demonstrated a Stirling-engine car, and some say he’s been seen tearing around the Kamen estate on his Stirling-powered electric bike. Stirling engines are also under development as auxiliary power for houses, and Gizmag says Kamen’s also working on a Stirling engine-powered robot for the US military that can “eat” wood or leaves and never needs recharging. Also known as Chuck Norris.