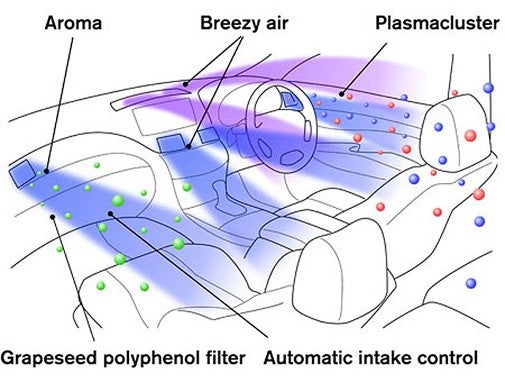 It is estimated that about 100,000 crashes a year are caused by sleepyhead drivers. Now, scientists are combating driver fatigue by developing systems that monitor your level of alertness — and Nissan is hoping to wake you up with a blast of smell.

Scientists working together in American and India have created an in-car camera that senses when the driver begins to yawn. The camera captures a sequence of images that distinguishes a yawn from any other facial action including talking, smiling, or laughing. It also has no trouble catching a yawn despite angle, skin color, the wearing of sunglasses, or the contrast and intensity of the light. Once the yawn is detected, the driver can be notified that he or she should pull over and take a break.

That’s where Nissan’s new Forest AC steps in. Using an array of sensors, the car detects what mood you might be in and responds accordingly with aromatherapy. The Forest AC “systematically controls cabin temperature, ventilation, aroma, and humidity to create an optimal interior environment.” They also claim that if the car detects you are getting sleepy, it will blast you with scents designed to increase your attention. They plan to install the Forest in the Nissan Fuga, which will ship in Japan sometime this year.

Whether or not smell will be an effective deterrent to passing out behind the wheel remains to be seen. But if the detection system proves useful, I imagine we’ll be seeing a wide range of nudging, shaking, or shocking technologies to keep you awake behind the wheel.