Alleged Killer Squirrel Is Captured On Camera For The First Time 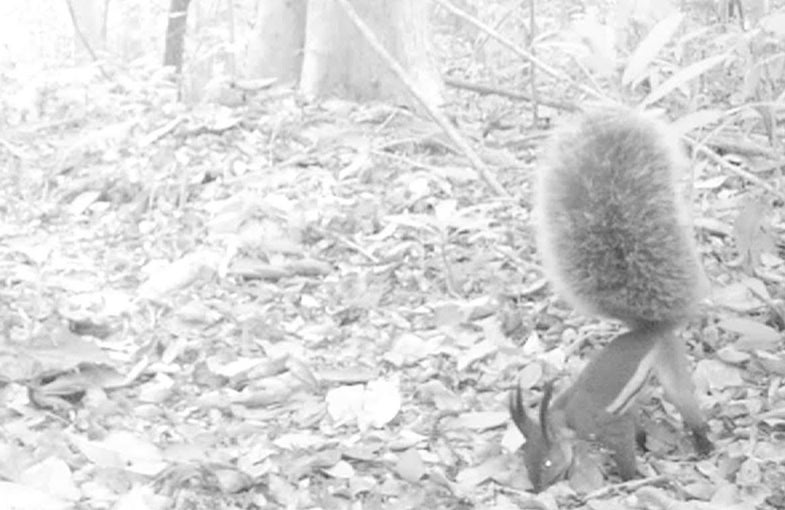 It’s not quite a video of Bigfoot, but it’s cuter.

The tufted ground squirrel (Rheithrosciurus macrotis), native to Borneo’s forests, enjoys the distinction of being both the squirrel with the fluffiest tail and the only one with alleged bloodthirsty tendencies. Local legend has it that the poofy vampire hangs out in trees and, with an adorable, cuddly hop, jumps on unsuspecting deer to disembowel them and drink their blood – but there’s never been any proof of that, since the elusive squirrel has only revealed itself to humans in fleeting encounters and blurry photographs.

A new black and white video clip shows the animal, which is twice the size of other tree squirrels, foraging in the ground during the night. Researchers from the University of Michigan and Victoria University joined forces with the staff of the Gunung Palung National Park to study the ecology of the area. What they didn’t expect to find in their infrared footage was the first known video of the squirrel, which neither confirms nor denies the bloodsucking rumors: although the animal’s tail is indisputably plush in the 15-second clip, nobody’s sure what it’s doing lurking in the corner of the frame.

Deer blood may be just a supplement to the mysterious creature’s diet of almost-impenetrable nuts of the canarium tree, though no one knows how it’s able to eat those either. Despite its toughness, however, the squirrel’s numbers are dwindling. The rare species has become even more vulnerable because of habitat loss and hunting.

Future sightings of the mysterious squirrel may lead scientists to more definitive answers about how it uses its fluffy tail and what (and how) it really eats.

In the meantime, the horror film industry has a new villain.