They're all in this together 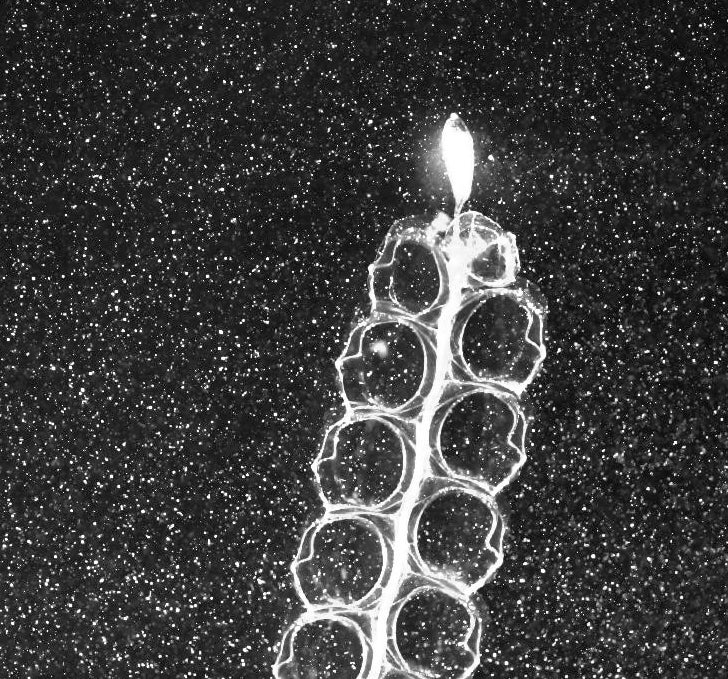 Think about how jellyfish or squid move. You’re imagining a graceful display of jet propulsion, right? It’s not uncommon for underwater species to take advantage of their environment to propel themselves through it. In a study released in Nature Communications today, researchers from the Marine Biological Laboratory in Woods Hole, Oregon University, and Stanford University detail how colonies of tiny hydrozoans use jet propulsion in concert with each other.

They studied Nanomia bijuga colonies off the coast of Washington state. N. bijuga, like other phsyonects are arranged along a stem. A gas-filled pneumatophore is used as a float on one end of the stem, and the siphosome at the other end take care of feeding and reproduction. In between those two are the nectophores (which collectively make up a nectosome). Those are the little guys that keep the colony moving. Here’s a helpful diagram, if you’re having trouble imagining it.

The researchers focused on the nectosome, and used laser light sheet illumination to see how the particles flow as the colony moves, which produced the stark glowing monochromatic images above and below.

They found that the young nectophores, at the top produce a smaller jet, but given their positioning at the top, they aren’t inconsequential.

“The young members have what we call a long lever arm,” lead author John H. Costello said in a statement. “They are like the handle of a door. If you push on a door near its hinges–its axis of rotation–the door is hard to open. But if you push on the door handle, which is far from the axis of rotation, the door opens easily. A little force placed with a big lever arm has a big effect on turning.”

The older nectophores are able to provide the much needed thrust, so that even though the nectosome is only a few centimeters in length, they can travel as far as 200 meters in one day. Understanding more about how these little guys use propulsion, the researchers say, could inform better underwater vehicle design.