You Have Already Complied: RoboCop and the All-Too-Feasible Horror of Brain Hacking 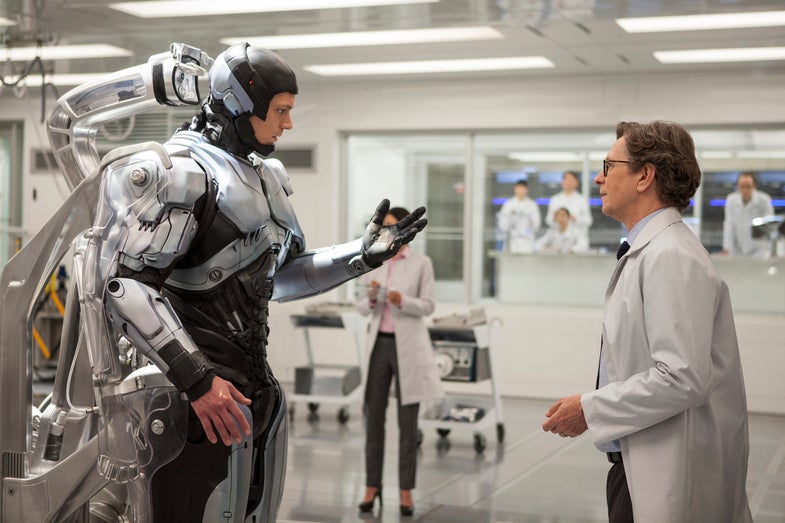 In science fiction films, science tends to play the villain. Speculative theories and far-fetched technology wear the old black hat and outsize mustache, and tie us all kicking and screaming to the train tracks. These are adventure stories, ultimately, so why not set cloned dinosaurs and predatory androids loose on civilians? Someone or something has to be vanquished by heroics.

So the new RoboCop movie poses the usual rhetorical questions, about the price of progress, and the consequences of playing God, as well as some more specific ones, such as the dangers of building killer robots and mucking around in a person’s brains. Whether it’s a quality film isn’t for me to decide, and the reviews, for what they’re worth, are mixed. Surprisingly high-quality, however, is RoboCop‘s most chilling conceit: that a brain implant could turn a human into a pliable cybernetic slave.

How this happens in the movie is pretty cool, as intellectual dress rehearsals go. When the gravely wounded Alex Murphy is rebuilt as RoboCop, his re-maker, OmniCorp, installs brain implants that help translate his neurological signals into machine commands. This is how Murphy thinks his superhuman robotic body into action. It’s a futuristic spin on present-day experiments, which have allowed paralyzed human subjects to move a robotic arm through direct neural control. It’s also a standard-issue sci-fi trick, scaling up current research until things get fun. That’s not the interesting part.

What’s interesting—and these are spoilers—is what OmniCorp is actually doing with those implants. In the film’s setting, corporations are able to send armed autonomous drones into conflicts overseas, to engage targets that qualify as threats. But the Dreyfus act, named after the philosopher Hubert Dreyfus (most famous for his critiques of artificial intelligence), prevents the use of self-guided armed drones in the United States. “It says that only entities that are conscious, that have a direct knowledge of what it feels like to be human, can understand what taking a life means, and can be allowed to take a life,” says RoboCop director Jose Padilha. “And so robots are not allowed to pull the trigger in America. OmniCorp is being deprived of a giant market. So they need to find a way to circumvent the law.”

The solution is RoboCop, a cyborg prototype that’s allowed to use deadly force on the streets of Detroit, because his brain is (mostly) intact, and his decisions are his own. Unfortunately, RoboCop is also a calculated sham. The implants in Murphy’s head aren’t just rewriting neural activity as control signals, but firing signals back into the brain, as well. When RoboCop responds to a crime, he’s doing so based on preset algorithms. Meanwhile, the implants are subtly tweaking Murphy’s gray matter, convincing him that every action he took was his idea. RoboCop is an autonomous drone, following rules and protocols established by his creators. “The system creates the illusion of free will. OmniCorp makes a machine that thinks it’s a man,” says Padilha.

According to Charles Higgins, a neuroscientist and roboticist at the University of Arizona, there are experimental precedents for this kind of insidious mind control. “In rats they’ve really done it, to the point where they can pretty much control the rats, and get them to turn in one direction or another by stimulating brain centers that release neurotransmitters, which give the rat pleasure when they do the right thing,” says Higgins. “So you can potentially do the same thing with a human, although it’s completely unethical.”

So long as the person wasn’t aware of the stimulation, those minute surges of pleasure might condition a human at a fundamental level, creating new instincts, or rewriting old ones. “The brain is really good at interpreting signals in a cognitively appropriate way,” says Higgins. The brain, in other words, would practically wash itself. From his advanced prosthetics to the self-rationalizing mind control, Higgins sees the concept of RoboCop—the cyborg himself—as technically feasible by the movie’s 2028 timeline.

And RoboCop‘s brain-level control scheme also addresses one of the more depressing truths about neuroscience. “We don’t really have any clue as to how intelligence works,” says Higgins. So instead of assuming that you could simply control Murphy like a remote drone, or turn his mind into a full-fledged biological computer, Padilha wanted to honor the complexity and sometimes unsettling plasticity of the brain. RoboCop isn’t hijacked by a resident artificial intelligence. He’s an unwitting collaborator, deluding himself into thinking he’s in control.

The convergence of biology and robotics probably won’t result in cyborg cops gunning down perps and wrestling with monstrous, two-legged military robots. Padilha believes that, “law enforcement is going to be automated. There’s no doubt about that. And once that happens, and it’s pretty soon, all the issues we debate in RoboCop will become real issues.” Personally, I don’t see lethal autonomous robots as inevitable, or even desirable. But there’s a legitimately scary prospect tucked away in RoboCop, that could become more pressing in the years ahead. The brain isn’t just vulnerable to having its cognitive strings tugged by tomorrow’s defense contractors, app developers and malware distributors. The damn thing could be ready to take credit for its own hacking.