Ever, possibly. It's also fascinating. We caught up with Benoit Marini, director of Mr. and Mrs. Dream, to talk about the play/show/dance/simulation. 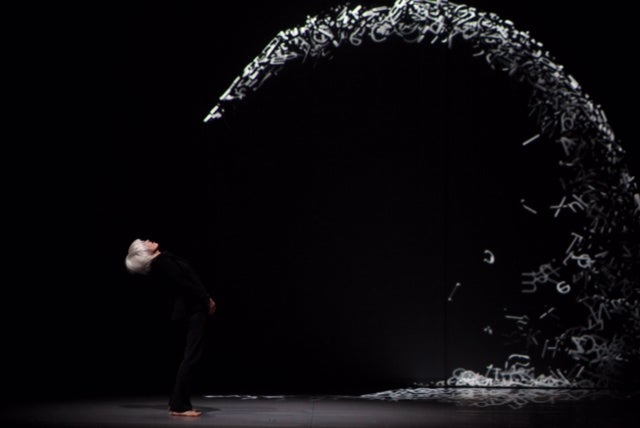 Benoit Marini has spent years working with virtual-reality technology for the French company Dassault Systemes. As the director for the company’s Experiental Lab and Passion for Innovation program, he’s overseen several projects using illusory or reconstructed worlds, like an explorable version of the Khufu Pyramid. (It’s in his blood. His parents were both engineers and his mother used to crack open the TV and use a welder on it; he assumed this was normal.)

In 2012, he started touring his latest show: the experimental, virtual-reality dance production Mr. and Mrs. Dream. It’s bizarre, and I mean that in the best way. Based on the works of absurdist playwright Eugène Ionesco, projectors, lights, and sensors (the dancers forbid the use of virtual reality goggles) combine to make the–uh–production something different, to say the least. Example scene: an apartment that crumbles away to reveal the universe hiding behind the exterior. (The French!)

I caught up with Marini at South By Southwest to talk about the project, coming soon to the U.S.

**Popular Science: **What is this project? How would you describe it?

As it makes the universe of Ionesco, which is really surreal, we decided to call that “virtual unreality,” because it brings life to fantasy, to something weird and strange, instead of giving life to something real.

The show involves two dancers, and they’re from the mind of the author, Eugène Ionesco, and we travel with them through his plays, through the interpretation of the dancers. I think the experience the people have when they come out of the show, they describe it as really unique.

**BM: **We designed a big box, called the Magic Box, because it creates an illusion, like a magician. This box is using screens on the side and on the back. On the floor there is a regular dance floor. Everything has the same color–it’s a light gray. We are using five or six projectors to project everything–everything is like one big universe, one big picture.

All of the projectors are located directly on top of the dancer. We use, for particular scenes, sensors located on the top to know their position in the space of the Magic Box. In other scenes, we’re using sensors directly on the bodies of the dancers so they can interact.

**PS: **Which part came first? The choreography or the technical side?

**BM: **When we started the project, they set up the music–it would not be the final music of the show, it would just be music that would be replaced by another original creation, from Laurent Garnier, who is a famous french DJ. They selected the music and searched for choreography, and during this time we were designing the box and creating the software. Then, during the rehearsals, they tried the test we’d prepared, they adapted and changed the choreography.

**PS: **Can you tell me about some of the specific scenes? There are surreal moments: You mentioned an apartment falls apart and you can see the universe outside of that. What are some other scenes you accomplished with this technology?

**BM: **I really like the first scene, because at the beginning, when you’re a spectator, you think it’s real. Time accelerates, a painting falls, there is a clock turning really quick, you see a storm, and everything starts to get old in the room and to vanish. The question it brings is: Is reality real, or only an illusion? This opening scene takes everyone into the fantasy world. You know you’re no longer in the real world.

All the scenes have their own meaning. You see a big character called The No Face–the character symbolizes God–and cells come from him, and that’s the rebirth of the character into the show. There’s one cell at the beginning–the dancers dance very close together–and then they split, like mitosis, and they have their own individuality.

**PS: **Tell me more about what you do in general. This was kind of a departure from the kinds of projects that you usually do?

**BM: **I’ve been working for Dassault for 14 years, and I’ve been working for the Passion for Innovation program [where the idea for the production was born] for 10 years. So we started small, with only a few people. But we started with a big project: it was about the Khufu Pyramid. We met a guy, and he had a theory, it was about the construction of the Khufu Pyramid. The Egyptians would know what would happen 10 years later, and they had a plan for that. It was related to the core of what we know. So we said, let’s use this theory and simulate it.

We changed the experience into experimental theater–it was like an immersive room, and people could learn in real time what was happening in ancient Egypt, and how this could be built.

I’ve also been working on realistic avatars–how you can quickly create your own avatar just by uploading one or two photos.

**PS: **Do you see this technology as something that could be used in more traditional theater? Will there be a virtual Death of a Salesman?

**BM: **There is no limitation when you create 3-D worlds–you can create whatever you want. And this kind of immersive display can be used to examine life, so I hope there will be new kinds of shows using this immersive technology. This is the beginning, I think. In the future, we can use it on the stage, or make it bigger, with more sensors or people inside. But what we already have is still bringing people the illusion that you have something alive in front of you.