Half a year after Edward Snowden first leaked details about the U.S.' surveillance programs, President Obama announces his plans for change. 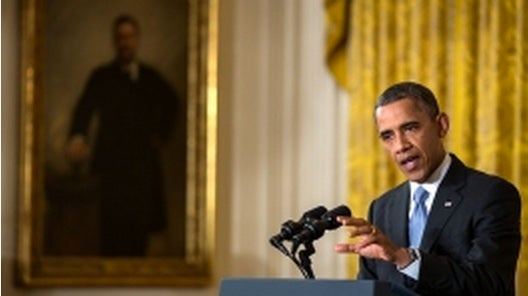 The NSA’s gathering of Americans’ phone call metadata is going to see a few changes. President Barack Obama promised several reforms to U.S. intelligence-gathering activity in a speech he gave today, although critics are warning the changes will be minor. The speech was the culmination of a long debate in the U.S. over revelations, stemming from classified documents Edward Snowden handed over to reporters, of the extent of federal surveillance on both Americans and American allies.

Among the biggest reforms Obama announced included a revamping of the metadata program, which is one of the most contentious programs Snowden revealed. The program records when calls are made between phone numbers, plus how long those calls last, though not the calls’ contents. How different the program’s replacement will be, however, is still unclear. Obama also addressed worries about spying on U.S. allies, an issue that first garnered attention when German newsmagazine Der Spiegel found that the U.S. had tapped Chancellor Angela Merkel’s cellphone for years.

Many of the changes Obama promised came from recommendations he received from an independent panel of advisors he convened after Snowden’s revelations. But he didn’t take all of the recommendations. As The New York Times points out, one major omission was that he didn’t talk about the National Security Agency’s hacking into the encryption that American tech companies use to protect their customers’ emails and other data. The NSA maintains technological “back doors” in such software, which makes them not only vulnerable to domestic surveillance, but also to attacks from criminals. Obama also didn’t make many changes to how intelligence officials use national security letters, which are the demands for data they issue to companies when they’re seeking information on individual people.

Over gradual steps, Obama wants to scrap the NSA’s phone data-collecting program altogether. It’ll have a replacement, although exactly what that will look like is still up in the air. It will have to be more acceptable to privacy advocates than the old program, but still provide U.S. intelligence agencies with information, which Obama emphasized could be helpful in a crisis. “For example, if a bomb goes off in one of our cities and law enforcement is racing to determine whether a network is poised to conduct additional attacks, time is of the essence,” he said. “Being able to quickly review phone connections to assess whether a network exists is critical to that effort.”

Those who run the phone metadata program will have to present Obama with an alternative by March 28, when the program is due for reauthorization. One option includes having another entity, not the U.S. government, store phone metadata until intelligence officers want to search it. But that idea has some problems, Obama said, including what laws would apply to that other party.

As for surveillance on non-Americans, Obama wrote a policy directive that states some restrictions on how intelligence on non-Americans will be used. It won’t be used for suppressing criticism or civil rights activism, as it was when U.S.officials monitored anti-Vietnam War activists and civil rights activist Dr. Martin Luther King Jr. in the 1960s. Data on foreign calls won’t be used to give American companies a competitive edge.

The U.S. also won’t monitor leaders in countries that are close allies with the U.S. “unless there is a compelling national security purpose,” Obama said.

Throughout the speech, the president took care to acknowledge both sides of the debate. He was especially supportive of the NSA and those who worked there. He defended U.S. programs as they are, framing his reforms as protections for the future, not amendments for the past.

“The men and women of the intelligence community, including the NSA, consistently followed protocols designed to protect the privacy of the American people,” he said. They did nothing illegal, he added. “They’re not abusing authority.” Their work is difficult and vital to preventing terrorist attacks on the U.S., he said.

But, he added, it’s clear that the way intelligence programs are structured now makes them open to abuse in the future. It’s good that Americans are learning more about what American intelligence does, and that they’re having this debate. Nevertheless, he was not a fan of how Americans came to talk about the NSA. “The sensational way in which these disclosures have come out have often shed more heat than light,” he said.