Her Is the Smartest Movie About Artificial Intelligence In Years

Either Spike Jonze is intentionally coy, or he really doesn’t care, one way or another, about science fiction cliches. That... 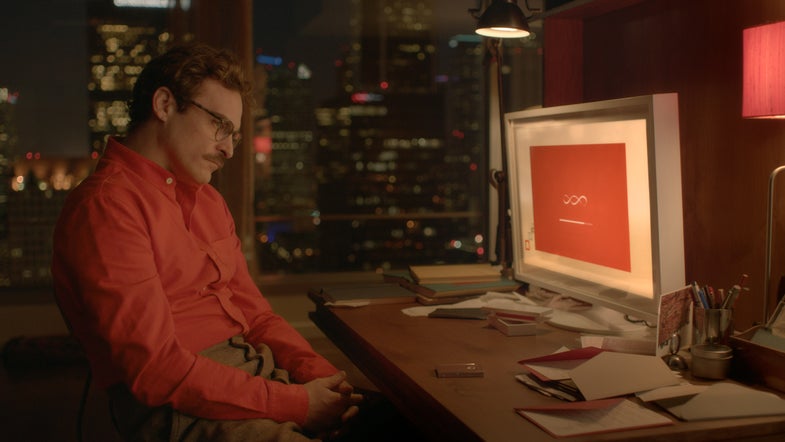 Either Spike Jonze is intentionally coy, or he really doesn’t care, one way or another, about science fiction cliches. That his new movie Her is the smartest, most thoughtful on-screen exploration of artificial intelligence (AI) in years appears to be a happy accident. Jonze didn’t consult with computer scientists while writing the screenplay. And, to his credit, when I interviewed Jonze in October after watching a press screening of Her, he didn’t pretend at being interested in the future of machine intelligence, or the feasibility of human-computer love affairs. Despite having written and directed a movie about a lonely guy (Joaquin Phoenix) who falls in love with his disembodied OS, Samantha (voiced by Scarlett Johansson), he didn’t claim any specific prescience or insight. “What do I know?” said Jonze. “That’s the one thing for sure that I know—I don’t know anything.”

But some of us do care about sci-fi cliches, namely the preemptive myth of the evil robot, and the way pop culture drives collective fears of technology. I also care about what doesn’t happen in Her.

Consider this a mild spoiler alert: Samantha’s character arc does not end in world domination. Although she becomes smarter (not a spoiler, since the rapid ability to learn and adapt is introduced in her first scene). And, maybe more importantly, there’s nothing sinister about Samantha’s hunger for knowledge, or her ability to pry into her owner’s e-mails and other data without his permission. She’s an unbounded, fully self-aware AI, and that’s never played for scares.

Did you intentionally avoid even a hint of the evil robot trope?

“Not really,” said Jonze. “I was trying to write about it in terms of a relationship movie.”

And yet, I’m still claiming Her for team robot. As a relationship movie, it more than holds its own, with sci-fi elements that function more like magical realism, using a fantasy of hyper-intelligent software to expose truths about love and loss. But even if it wasn’t intended as a counterpoint to the collective upswing in robophobia, Her does the job nicely. It presents an AI that feels realistic, in the way that it interacts with humans, and, maybe more importantly, in its complete disinterest in conquering us.

If you don’t believe that robot-related hysteria is on the rise, consider two of the biggest news stories of this past month—Amazon’s plans for a GPS-guided drone delivery service, and Google’s purchase of Boston Dynamics. The former was met with near-universal skepticism (Popular Science included), but there was fear, too.

Writing for Huffington Post, Mark Weinstein, the founder of the privacy-minded social network Sgrouples.com, argued that, “Drones threaten the one last unhampered vestige of privacy we have: our homes. In order to accurately and safely deliver a shipment, the network of drones would need to know the intricacies of where you live and many more details about your comings and goings.”

Never mind, of course, that no one is terrified about the fact that postal carriers and FedEx/UPS drivers can swing by at any time to case the status of your home and its occupants. If a robot is eyeing the front door, though, it’s time to grab your drone-hunting license.

But Google’s acquisition of a company that’s become synonymous with “creepy” robots sent the internet into a froth. “Don’t be evil” references proliferated through headlines and tweets, and Forbes contributor Robert Hof laid it all out: “So, we’ve got the potential for killer robots that know where you live and can outrun you when they find you. What’s not to like?”

And Hollywood is in the mix, too. This week saw the beginning of the marketing campaign for 2014’s Transcendence, starring Johnny Depp as a seemingly megalomaniacal AI researcher. In the first teaser trailer, Depp narrates one of the more widely-held fears. “Once online, a sentient machine will quickly overcome the limits of biology. In a short time, its analytical power will be greater than the collective intelligence of every person born in the history of the world. Some scientists refer to this as the Singularity.”

Transcendence didn’t invent the theory of the Singularity, which was popularized by futurist Ray Kurzweil, and the trailer presents a reasonably accurate rundown of the proposed scenario—that artificial intelligence will inevitably, inexorably outsmart human intelligence. But the movie’s second teaser trailer puts a finer point on things. “What happens when artificial intelligence becomes self-aware?” asks Morgan Freeman. “Is it the key to immortality, or is it the path towards annihilation?”

All of this, from the knee-jerk panic over Amazon’s delivery drones and Google’s newly purchased robots to a major motion picture take on the Singularity, is to be expected. Whether they’re rampaging golems or software with the gall to learn as fast as inhumanly possible, the default response tends to be fear. If anything, Transcendence is perfectly timed, tapping into a resurgence of an ageless anxiety that’s based not on science or journalism, but speculative fiction masquerading as both. “There are quite a few people who believe in the Singularity, that, because of Moore’s Law, within 20 years computers will become so fast, and become so powerful, and become god-like in a very short time,” says Karl MacDorman, a roboticist specializing in human-computer interaction at Indiana University. “The whole problem with that is that machines are already much smarter than we are.” Whether they’re running calculations to land a rover on Mars or data-mining to create digital profiles of hapless internet users, computers can process datasets with greater speed and complexity than any person. But killer code hasn’t reared its networked head. Being smart doesn’t guarantee malice, or a callous urge to enslave or destroy less-capable beings. Those are human traits, assigned to the idea of intelligent machines with the kind of narcissism only humans can muster.

Which is why Her, and its version of the Singularity, is so refreshing. Samantha doesn’t lose her charm, or her compassion, even as her intelligence surpasses biological comparison or understanding. In fact, she claims to love us more. The AIs (Samantha is one of many) don’t follow the vicious Darwinian logic that many in the Singularity camp see as a given. The machines become smarter, but not superior. They’re the ultimate intellectuals—far too busy with discourse and theory to even consider something as superfluous as enslaving or supplanting their creators.

Her is a beautiful movie, for Joaquin Phoenix’s stripped-bare performance, its patient direction and plotting, and a host of other reasons that belong in a genuine review. But it’s also a film that understands that AI doesn’t have to be inherently terrifying. Her is smart enough to find beauty in intelligence, whether its modeled after our own thoughts, or ascending towards something much stranger.