These Blimps Are Meant To Protect Washington DC From Missiles Somehow 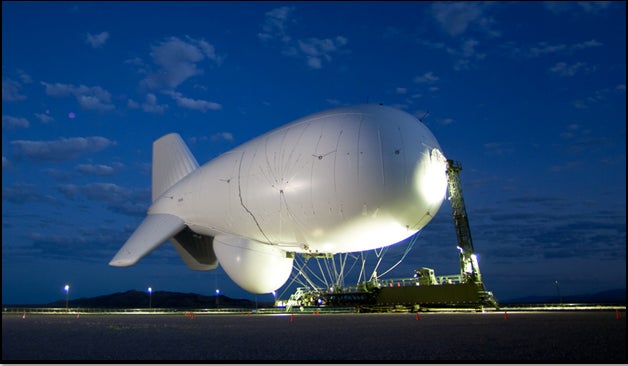 To protect the nation’s capital from a 21st century threat, the Pentagon is turning to a technology first seen in World War I: blimps. Made by Raytheon, the “Joint Land Attack Cruise Missile Defense Elevated Netted Sensor System,” or JLENS for short, is a tethered inflatable bag of gas with sensors on board. There are now numerous JLENS blimps floating high above rural Maryland — lumpy sentinels constantly on the lookout for incoming cruise missiles.

Each JLENS system is a pair of blimps that fly up to 10,000 feet and then watch for threats 340 miles away. One radar scans all around, and another tracks incoming objects with a narrower focus. Once a threat like an incoming drone or cruise missile is spotted by radar, the second blimp relays continuously updated targeting information so that the military can hopefully shoot it down. While the military has specialized airplanes that can do this, passively watching for a threat outside of a war zone is something blimps can do longer and at a lower cost.

It’s the rare threat that can attack the United States directly but be thwarted by a radar-carrying blimp. Submarine launched cruise missiles are one such risk. In a February 2014 statement to the House Armed Services Committee General Charles H. Jacoby Jr., the commander of NORAD, noted that “advances in submarine-launched cruise missiles and submarine technologies challenge our homeland defense efforts,” and that JLENS is one response to that. Russian cruise missiles, fired from submarines, were built so that they could carry nuclear warheads. The Severodvinsk, a nuclear-powered Russian submarine commissioned just this summer after 20 years in construction and trials can carry nuclear-capable cruise missiles made for attacking land targets from more than 1,800 miles away. And Russia’s planning to build more just like it.

With the Russian economy collapsing and a war dragging on in neighboring Ukraine, starting a nuclear war with the United States is probably far from the mind of Vladimir Putin. Meanwhile, the JLENS can wait, floating above farmland, ever vigilant for the first sign of armageddon, hoping to thwart doomsday right before it happens.