Self-control and your body clock both have their place in bedtime procrastination. 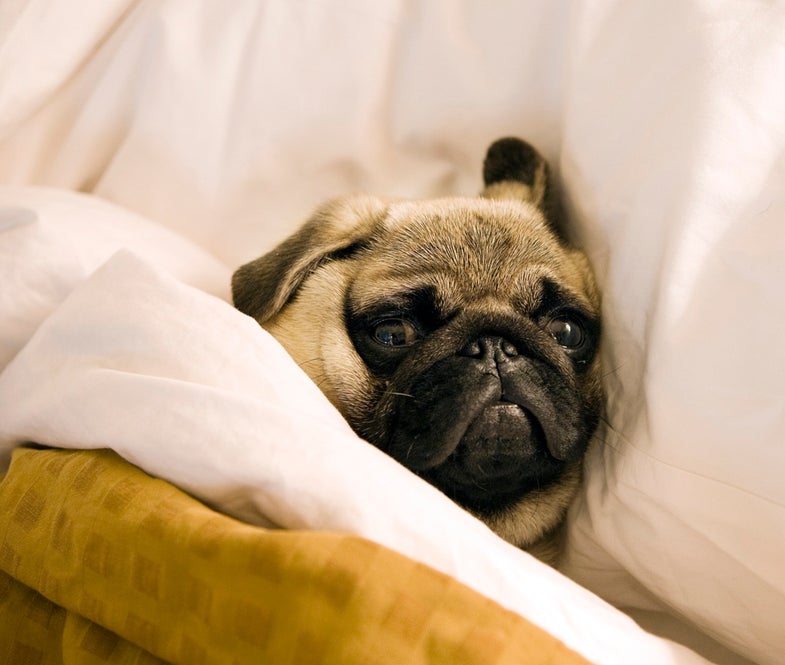 You know the feeling. It’s late and you were supposed to be asleep 20 minutes ago. But Netflix calls. Or the new Stephen King novel. Or that final email for work you didn’t get to earlier. You should probably just call it a night, at least if you don’t want to be tired and cranky tomorrow. But you just…don’t.

For many of us, putting off going to bed is an all too familiar problem. Yet psychologists only came up with a name for this behavior—bedtime procrastination—a few years ago, and still don’t entirely understand why we do it.

The team in the Netherlands who coined the term have argued in favor of poor self-regulation. But another camp of psychologists has recently proposed that chronotype—our biological preference for waking and sleeping at certain times of day—may be a better explanation for bedtime procrastination. In February, they reported in the journal Frontiers in Psychology that night owls delayed going to bed most at the beginning of the workweek, perhaps because they were still well rested from sleeping in on their days off.

Now, the Netherlands-based researchers are warning that we shouldn’t underestimate the importance of self-control in keeping you up later than you intended. “Reducing bedtime procrastination to a predominantly biological issue does not do justice to its complexity,” they argued in a June 11 commentary on the new paper.

As bedtime approaches, it’s likely that both biology and self-discipline are important players in your struggle to turn in. Here’s how each of these ingredients might contribute to the recipe for bedtime procrastination—and what that means for how you can stop doing it.

The case for self-control

Bedtime procrastination hadn’t received much attention before the 2014 research, says Floor Kroese, a health psychologist at Utrecht University in the Netherlands. “We knew that a lack of sleep was bad for people, but it was mostly studied in the context of sleeping problems.”

To find out how prevalent bedtime procrastination is, Kroese and her colleagues surveyed more than 2,400 people in the Netherlands. They found that about 53 percent of the respondents claimed that they went to bed later than they wanted at least twice a week. They also discovered that people who admit to regularly putting off bedtime were also more likely than others to report being poorly rested, be procrastinators in other areas of their lives, and score lower in self-control.

A key element of bedtime procrastination is that you don’t have a particular reason for not turning in. So staying up late because your kid was sick or you needed to pick up your friend from the airport doesn’t count. “That wouldn’t be bedtime procrastination, because then you simply couldn’t have gone to bed earlier,” Kroese says.

With bedtime procrastination, you could crawl into bed at any time. Your own better judgment is telling you to do so. So what’s stopping you? People tend to look upon sleeping as one of their favorite activities, so it’s probably not snoozing itself that’s the problem, Kroese’s colleagues have speculated.

Being unwilling to cut your relaxing evening activities short no doubt plays a role. But there’s also the matter of dragging yourself off the couch and tackling the final set of chores that stand between you and your pillow. Walking the dog or going upstairs to wash up “may sometimes seem like an almost insurmountable hurdle,” the researchers acknowledged. Moving these chores to earlier in the evening might be one way to sidestep bedtime procrastination, they proposed. That could mean popping your contact lenses out when you get home from work or brushing your teeth right after dinner (or at least right after your final evening snack).

The team has also found that people who have to resist more temptations throughout the day are more likely to cave to bedtime procrastination come evening, when their self-control is at its nadir. “There may be evenings on which it is a bad idea to start watching a favorite TV series close to bedtime, and there may be evenings on which it is no problem at all,” they recently wrote in Frontiers in Psychology. If there were a way to track how many times you’ve had to battle your impulses to watch YouTube videos at work or eat chocolate pie for lunch, it might be easier to predict when you’re most susceptible to bedtime procrastination, they said.

The case for your body clock

By now, we’ve started to realize that a person’s sleep and wake cycle is pretty deeply ingrained. Some people are genetically predisposed to be alert later into the evening than others. And it’s not just night owls who suffer; the majority of us have to rise for work before our body clock is ready. One upshot of this could be bedtime procrastination.

Jana Kühnel, a psychologist at Ulm University in Germany, argues that a tendency to delay bedtime is therefore different from other forms of procrastination. The problem with calling this behavior bedtime procrastination, she says, is that it implies that the person “is in full control” of failing to go to bed. This might not be the case for night owls, Kühnel says. With other kinds of procrastination, there isn’t such a powerful biological force underlying your struggles, she and her colleagues suspect.

To find out whether our body clocks play a role in bedtime procrastination, they asked 108 people to fill out questionnaires to pinpoint their chronotype and overall strength of self-control. Then over the course of one workweek, people reported each morning whether they’d put off going to bed the previous night. The workers filled out another questionnaire in the evenings that gauged how much self-control they had at their disposal at that moment.

It turned out that night owls were very slightly more likely to delay bedtime than larks. However, the effect was too weak to be taken as evidence that night owls actually procrastinate bedtime more on average, Kühnel says. This might be because the group of people queried wasn’t large enough to capture these differences.

However, she and her team did discover that night owls become less likely to stay up later than intended as the week wore on. This could be because, after struggling to fall asleep on time for several days, they were so tuckered out that it became easier to hit the hay. So the findings are more revealing about when a particular person is most likely to procrastinate bedtime than who does it most on the whole, Kühnel says.

For reasons that aren’t clear at this point, people were also less likely to procrastinate going to bed on nights when they reported feeling that their willpower or focus were at low ebb. This suggests that people don’t delay going to bed because their reserves of self-control have been depleted.

Rather, Kühnel and her team argued, the phenomenon should be seen as an indication of how mismatched employees’ bodily clocks are with societal demands.

“The intention to go to bed earlier is not enough,” Kühnel says. “Biological processes need to support this intention.”

Our cultural perception of people who rise and go to bed late is still tinged with the idea that they are undisciplined. One study found that managers are actually less likely to give night owls good reviews as other employees, regardless of how well they actually perform; they see them come in late and assume they are slackers.

The new findings are a reminder that being a night owl isn’t a sign of laziness. “This is like a message to these later chronotypes out there,” Kühnel says. “People should not think, ‘oh my god, I’m such a bad self-regulator, I don’t manage to go to bed on time.”

Nor are you doomed to have your ambitions to get a good night’s sleep forever thwarted. “We do not want to depict individuals who experience difficulties with going to bed ‘on time’ as victims of their circadian rhythms,” the researchers wrote. After all, there are ways to shift your body clock to an earlier time, such as avoiding screens that emit blue light before bed and getting outside and exposing yourself to bright sunlight in the morning. It may be that if you’re feel yourself getting sleepy sooner, this will translate into being less likely to procrastinate going to bed.

The case for both

For her part, Kroese says that she and her colleagues don’t discount that chronotype may feed into bedtime procrastination. But that doesn’t make the phenomenon different from other situations where people have good intentions—like avoiding mouthwatering donuts and cheeseburgers—and then fail to act on them.

“A conflict between biological factors and personal goals or societal requirements is almost by definition the core of many self-regulation problems,” Kroese says. For people with an innate drive to stay up later, this clash is particularly intense.

What’s more, having good self-control doesn’t necessarily mean being adept at resisting temptation. In fact, the long-held idea that resisting temptations repeatedly exhausts our willpower has recently come under fire. Instead, it’s probably more important to able to stick to healthy habits, Kroese says. For some people, that might mean not keeping candy in the house; they don’t have to put effort into deciding not to snack.

“People with high self-control use smart strategies to follow through on their good intentions,” she says. “Make it as easy as possible so that you in the heat of the moment don’t need to resist temptations of make difficult choices.”

That might mean following a self-imposed rule not to look at your phone after a certain time or getting serious about sleep hygiene. “They might even be assisted by some smart technology, such as lights that can be pre-set to dim at a certain time,” Kroese says.

Both Kroese and Kühnel agree that self-regulation and chronotype are probably both involved in tipping your mental scales in favor of not going to bed. “We did not want to demonstrate self regulation is irrelevant or does not play a role for bedtime procrastination,” Kühnel says. “But we wanted to show that chronotype is a factor that should definitely be taken into account.”

Does it really matter why you struggle to turn in at night? Probably yes, considering how damaging a lack of sleep can be. You’ve likely noticed how it’s harder to concentrate or remember information when you’re exhausted. In the long run, though, loss of sleep is also associated with ailments like diabetes, heart disease, and high blood pressure. By one estimate, nearly 30 percent of American adults get six or fewer hours of sleep a night. So it’s important to understand all the different reasons why people aren’t getting enough shuteye.

Putting off bedtime might seem like a trivial problem, but the choices we make that affect our sleep could turn out to be pretty important for our health, Kroese says. Like exercising or eating a balanced diet, “it is also an important behavior that they can also influence themselves.”

It will be some time before psychologists completely disentangle the contributions biology and self-control make to bedtime procrastination. So at the moment, it’s too early to say decisively which interventions will be most effective in helping you curb it.

“We only have one study on this phenomenon now relating it to chronotype,” Kühnel says. “We definitely need more research.”