The astronaut leading humankind's journey to the stars says if we want to get to another Earth, we'll have to expand our thinking. 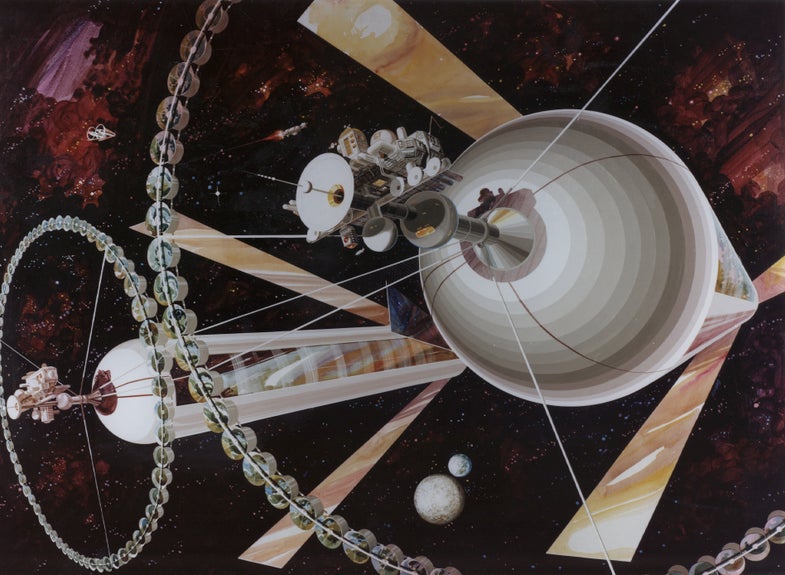 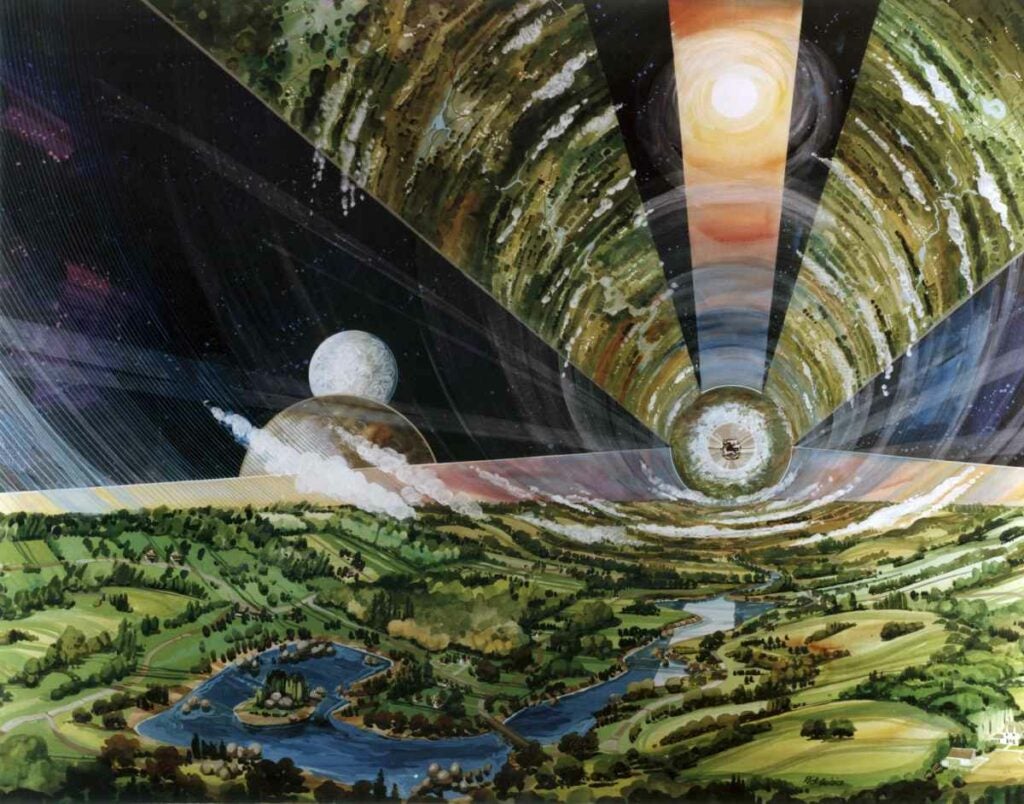 The Very Green Interior Of An Imagined Colonial Transporter

Christopher Nolan’s Interstellar imagines a human journey to planets beyond our star. That trip would of course be impossible in today’s terms. But there’s good news for sci-fi dreamers: a DARPA-funded task force is working to make it happen in the next century.

Mae Jemison, leader of the 100 Year Starship Project (100YSS) told Popular Science that enormous challenges stand between human beings and colonizing a distant star system. But she believes 100YSS can bring together the diversity and creativity of invention necessary to launch humanity’s first starships.

Jemison has had a rare vantage point on human spaceflight. An engineer, physician, and—for six years—a NASA astronaut, she became the first woman of color in space when she orbited Earth in space shuttle Endeavour. Often, astronauts talk about the “overview effect” from space, a sense of oneness with Earth and its people. But Jemison says she found herself drawn in the opposite direction.

“I looked down and I saw the Nile River go by, the pyramids, and my hometown Chicago, and I tried to make myself afraid. Outside of this hatch are forces totally inhospitable to human life,” she said. “But I couldn’t feel it. I would have loved to be up there in a bubble with just my cat.”

The fact is, Jemison never strayed far from Earth. Shuttle astronauts, from the perspective of a solar traveller, barely got off the planet. No human being has gone beyond orbit of the far side of this planet’s moon. Crossing the distances Interstellar imagines will involve gigantic leaps in technology and human infrastructure. Nolan gets it wrong, Jemison says, in populating his epic with vehicles that look a great deal like those travelling around Earth today.

In the ‘Interstellar’ trailer, Matthew McConaughey sets off for the stars in a ship that looks a lot like the ones we use to orbit Earth.

She likens Interstellar‘s challenge to crossing the Sahara desert—another vast, lifeless space that humans have nonetheless tamed. But in the 53 years since the Yuri Gagarin made the first trip into Earth’s orbit, crewed missions have yet to make a substantial fraction of a trip to a foreign star. Like the nomads who build cultures around desert crossings, Jemison says our entire approach to space travel will have to change before we attempt the interstellar vastness.

Right now, a lack of powerful yet efficient propulsion limits human civilization to this solar system. For example, the Voyager I probe, launched in 1977, speeds away farther from Earth than any other spacecraft. In 2013 it became the first in interstellar space. However, it will be another 40,000 years before it even remotely enters another star’s neighborhood. Any mission making the journey to a habitable exoplanet must move a much larger weight much faster—approaching a substantial fraction of light speed—to make the trip in even several generations.

Of the many technologies Jemison says might accelerate a spaceship to that velocity (and, equally as important, deccelerate on the other end), only one exists today: nuclear fission. Some power plants, military submarines, satellites, and aircraft carriers convert heat from decaying atoms into energy. But no reactor has ever propelled a space engine, partly because of the dangers and inefficiencies of fission, and partly because of international treaties governing the use of nuclear power.

Where fission fails, its cousin might succeed. That is, if we can ever make it work. Fusion—smashing together atoms to form larger elements while releasing incredible energy—powers every star in our universe. With some ingenuity, it could also help us reach them.

To illustrate the diffierence between fission and fusion, consider America’s nuclear assault on Japan in 1945 used fission bombs and had a combined blast area of about 20 square miles. The blast of the largest fusion bomb ever tested, meanwhile, affected 1,520 square miles.

“We can’t separate the vehicle from what it’s doing and what it’s carrying—it’s got to be different.”

The prospect of fusion-powered spaceflight is tantalizing, but efforts to even build an efficient reactor on Earth have stalled for several decades. Antimatter, produced in tiny, fizzling samples at CERN, annihilates with still greater power when it contacts matter. Yet scientists have only produced a few particles of the exotic substance, and the record storage time is 1,000 seconds before spontaneous annihalation. In short, we have a long way to go before filling up a gas tank with antimatter. Jemison also points to the possible construction of vast solar sails to catch photons and accelerate a craft over huge distances. Huge earthbound lasers and power sources could then propel the craft without the need to drag interstellar engines along.

But Jemison says propulsion is just the first and most obvious problem an interstellar ship’s engineers have to address, and that this point is where many science fiction films like Interstellar fail. “One of the issues with applying today’s space technology to the future is it blocks our way of thinking,” she says. She would like to see a movie explore a more radical vision.

“Even the inside of the Enterprise [from Star Trek] looks a lot like what we have today, with grey walls and military hierarchies and buttons everywhere,” she says. “We can’t separate the vehicle from what it’s doing and what it’s carrying. It’s got to be different.” We should expect a starship built in 2114 to be as alien to us as the International Space Station would be to a biplane pilot in 1914.

A ship making the journey to another solar system will likely have to leave without any plan to return. It’d also need to contain an environment that could nourish and protect decades or centuries’ worth of travelers. Jemison says a lush, green ship might carry the first outbound crew. Components would self-repair, and food would grow within the walls. (Such engineering challenges plague Mars colonization ideas today.)

Even a giant, antimatter-driven, self-sustaining space colony, however, might fail on its journey. A suitable starship must be more than sustainable and powerful. It must also protect its inhabitants. Using today’s technologies, an enormous lead shield would have to separate the ship’s inhabitants from harsh radiation out there in the universe. (Some suggest a hollowed-out asteroid.) But in the future, magnetic technologies now bending radiation at cancer in the body might scale up to deflect gamma rays like Earth’s protective magnetosphere.

So, let’s say we do build a ship that can safely carry a population over lightyears. It will be useless without a vibrant, skilled community to inhabit it, Jemison says. “That crew that goes, whether it’s 50 or 10,000, needs to reflect the diversity of the planet it comes from—cultural, gender, and socioeconomic.” About 10,000 travelers would be the minimum—any fewer than that, and genetic fitness would take a hit (see chart below).

About 40,000 people would be needed to seed a genetically fit deep-space colony, according to one study.

To bolster diverse thinking, Jemison invited researchers from wide-ranging fields onto the project, and set up programs designed to involve people without science PhDs in space travel. Today, textile and design professor Karl Apselund, for example, investigates interstellar clothing for the project. And more than $2 million for advanced aerospace manufacturing training has already reached Orange Coast Community College in California, where many students now go on to work for SpaceX, according to dean Doug Benoit. Jemison says the longterm goal is to expand the base of skilled laborers and technicians who one day will form the bulk of a large interstellar crew.

The course to a space-faring future for humanity is long and riddled with nebulae of uncertainty. Overcoming them will involve a generational shift in human ambition. Jemison says she’s glad Nolan’s film has built up buzz around the idea of interstellar adventures, but that she wishes such sci-fi films would show more creativity in their vision.

“I’m a little sad that the impetus of the movie is we’ve screwed the planet up,” she says. “I hope the reason we do this will be more positive.”