We all may have started out as babies, but some things about them are absolutely alien. 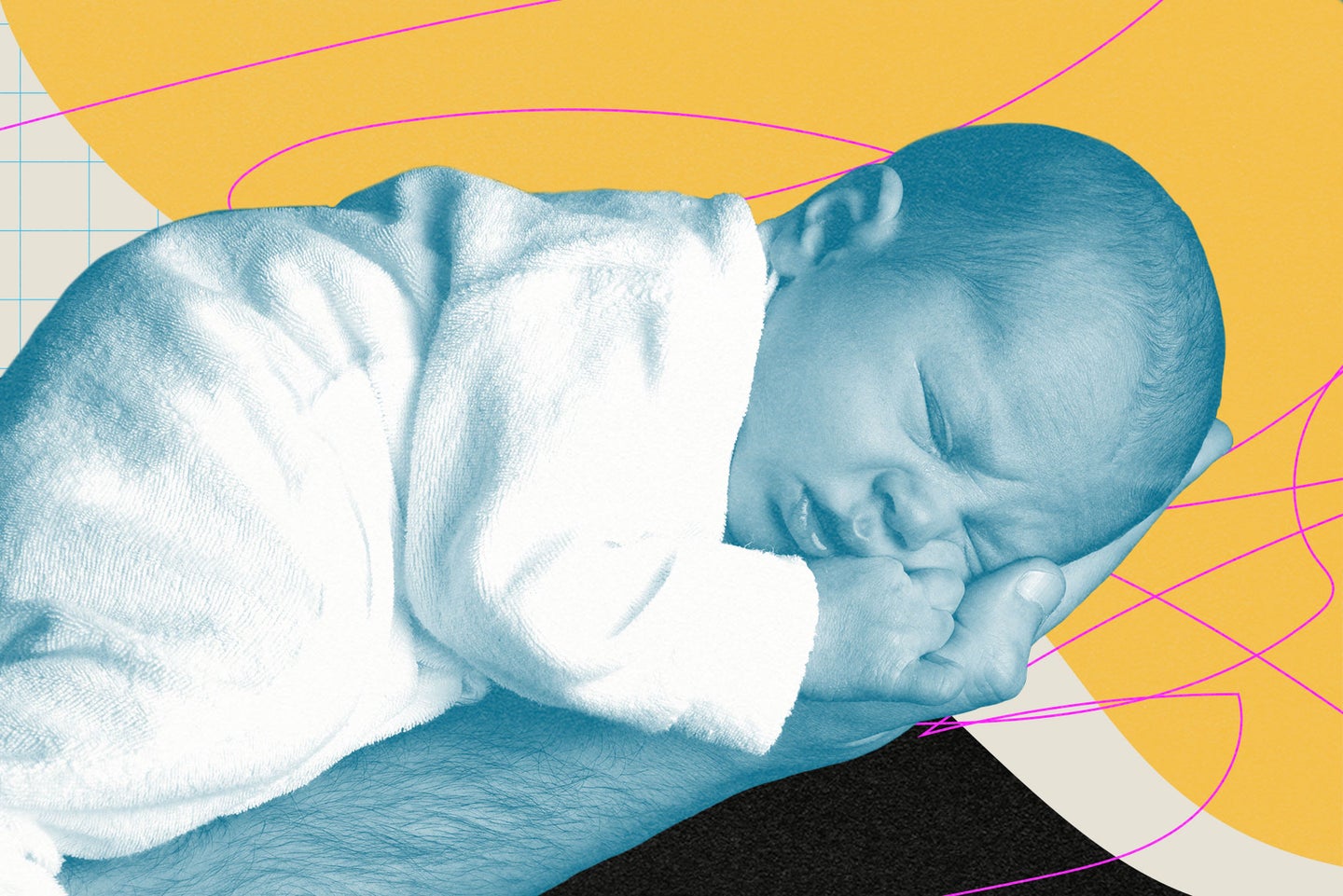 This baby may look sweet and innocent, but it’s chock-full of secret cool science facts.
SHARE

All of us began as babies. Yet, over the course of going from infant to adult, a lot of things change! Here are some of the most unique facts about the first stage of our lives.

Babies have more bones than you

Newborns enter the world with about 300 bones, almost 100 more than the 206 adults walk around with. The bonus bones are part of the un-fused road map of an adult skeleton, and contain gaps of cartilage that allow for extra flexibility and growth potential. As humans grow, cartilage calcifies and our bones fuse together into the complete, adult skeleton we know and love. The process of bone fusing continues well into the teenage years for most people. By about 16, all of the extra cartilage we’re born with has been replaced by bone.

Most bone fusing happens earlier in life though. For instance, “the newborn skull has many different bones that fuse over time,” says Nelli Gluzman, a pediatrician in New York City. Kids under the age of two have gaps in their skulls between growing bone plates called fontanelles, or ‘soft spots.’ These openings fuse together into one continuous piece of bone between about one and two years of age.

BONUS: Even though babies have more bones, they don’t have all of the bones adults have! Babies are born without bony kneecaps. Baby kneecaps are just cartilage; bone develops later.

Because of their unformed skeletons, babies can easily change shape! The flexible, unfused skull of a newborn is a benefit in vaginal birth, where a slightly squishy head can mold to the shape of the vaginal canal, and lead to a smoother exit, which is why many newborns are born with slightly pointy heads. And our brains triple in weight during the first three years of life. A stretchy skull makes room for all that rapid growth, says Gluzman.

In addition to having a pointy head, newborns might greet the world with their feet turned inward or outward. “The legs might look like a frog’s,” says Gluzman. This might look odd to parents, but it’s a totally standard byproduct of their immature skeletons. “Very often this is normal because of the fluidity with which the bones develop over time.” They won’t stay that way forever, she says, but notes that if parents are concerned they should talk to their pediatrician.

Babies can drink and breathe simultaneously (you can’t; it’s probably not worth attempting). Newborns breastfeed for long stretches of time, usually between 20 and 45 minutes, staying attached and continually drinking milk while also managing to breathe normally. The key to this superpower is the position of a baby’s larynx, the muscular organ that serves as the airway to the lungs and holds our vocal cords.

In newborns, the larynx is positioned higher in the throat, and interlocks with the soft palate to create a separation between the food pathway in the mouth and the breathing pathway in the nose. This is also why infants are often considered “obligate nose breathers.” It’s more difficult for them to breathe through their mouths.

Somewhere between three and six months, the larynx descends to a lower position, allowing for the possibility of speech. But, in the process of developing an adult vocal cord and larynx, we lose the expert chugging ability that newborns have.

Babies are natural swimmers (sort of)

Babies are instinctive swimmers (but that doesn’t mean you should put them in the pool right away). At younger than six months old, most babies automatically hold their breath underwater and experience the “diving reflex”—a set of autonomic responses that help conserve oxygen. Their heart rate slows, their peripheral blood vessels constrict, and they don’t inhale water.

The diving reflex instinct seems to disappear by six months in most cases. But, even with this reflex intact, babies should never be purposely submerged for long periods or unsupervised around water. Drowning is the leading cause of fatal injury in children ages one to four and causes 7 percent of all fatal injuries in infants less than one.

There are swimming lessons available for infants, but Gluzman says she doesn’t recommend them, and one study showed teaching under 5 year olds swimming skills had little effect on drowning risk.

BONUS: Babies have lots of other reflex behaviors too, including the well-known, super strong “palmar grasp”, when a baby automatically grips an object after it’s placed in their palm. This skill, which we share with most primates, disappears by around six months.

Babies are super growers. We’ve already learned that human brains expand so fast in early life that our skulls come in multiple pieces, but that’s not the only baby part that grows quickly. Babies generally double in weight in the first five months, and triple in weight within a year. Before six months, babies grow up to an inch in length monthly!

That said, growth in the first year of life isn’t standardized. “Normal” size and weight for babies isn’t a set number, but rather a series of observations forming a pattern.

Don’t expect babies to grow from the minute they enter the world, though. “It is completely normal for every single baby to lose weight when they’re born. 10 percent, or less, of weight loss right after birth is normal,” says Gluzman. And babies should gain that weight back within the first two weeks out of the womb.

Babies taste foods differently than older children and adults. Humans can detect sweet and sour flavors when we’re born, and show a preference for the sweetness of breastmilk right out of the gate. However, some research suggests babies don’t detect bitterness until 2 to 3 months in. And infants don’t seem to pick up on saltiness until 3 to 4 months.

Though it takes time for a baby’s tasting ability to fully develop, infants have more taste buds in more places (eg: on their tonsils) than adults. These taste buds start developing in utero, and fetuses pick up on flavors floating around in the amniotic fluid. The CDC recommends introducing foods other than breastmilk or formula to babies around six months. According to Gluzman, in these early food introductions, infants may show a preference for things eaten by their mothers while they were in the womb because of the familiar flavors.

And all babies have a tendency to start out as picky eaters. It can take lots of introductions to a new food before an infant accepts it. An average of 7 food introductions are needed for new food acceptance, says Gluzman. So, even if a baby initially rejects it—keep pushing that broccoli, they may learn to love it.

In fact, hydrating with water is even dangerous in the first months of life. Infants get all of their necessary hydration through breastmilk and formula, just as these ingenious liquids meet all of their nutritional needs.

Breastmilk and formula are what sports drinks claim to be: electrolyte balancing. They contain the perfect mix of water and salts to support healthy functioning. Giving water to a baby under six months can offset that balance, leading to low relative sodium, or overhydration. Babies have immature kidneys that can’t filter out excess water as efficiently as adult kidneys can. That excess water ends up floating around in the bloodstream, diluting the blood and reducing the concentration of critical electrolyte molecules that help with cellular communication.

Water is also filling, and babies have very small stomachs, explains Gluzman—a newborn’s stomach is about the size of a marble. Although the stomach starts to grow quickly, water can easily fill a baby up, and take away space from the calories and nutrients an infant needs to grow. Feeding babies under 6 months water or over-diluted formula “becomes a high risk for something called failure to thrive if it’s done constantly,” she says.

The substance that newborns poop out is called meconium, and is the waste product from nutrients ingested while still in utero. Meconium usually has very little odor and generally passes within the first few days out of the womb. Some babies are even born covered in meconium. This can happen if the baby is under stress and passes the meconium while still in the uterus.

Poop smells largely because of our gut bacteria and the byproducts of those bacteria helping to break down food. Babies leave the uterus without a bacterial colony in their guts. Gut colonization begins in the birth canal and continues out in the world with breastfeeding or formula drinking, and so after a couple of days of ingesting milk or formula by mouth, a baby will start to produce poop that looks and smells different from those initial number twos.

Infants drink milk, and sometimes, they make it too

Newborn babies can lactate, and it’s totally normal! Neonatal galactorrhea, the phenomenon’s scientific name, happens in about 5 percent of newborn infants. And all babies, regardless of sex, can experience it.

Newborn lactation looks different from standard lactation though, and is usually a very small amount of a milky substance leaking from a newborn’s nipples. It’s caused by exposure to high levels in estrogen in utero and in breast milk, and generally resolves on its own. However, new parents should bring it up with their pediatrician, especially if neonatal galactorrhea continues beyond two months old.

Babies are born with terrible eyesight

All babies start out with terrible vision. For the first few months of life, says Gluzman, infants have a very close field of vision. “If a mom is breastfeeding, they can see her face, but beyond that it’s not possible really,” she explains.

Focusing eyes takes muscle and baby brains need to learn to process visual information before they can do it accurately. As babies get in the five month to one year range, they can see objects farther away and with more acuity.

And initially babies respond much more to high contrast, black and white images than bright colors. Although it’s likely that newborns can still see color, they probably don’t fully process colors until a few months in. As vision slowly develops, babies start to respond to more colors, generally beginning with red a few weeks post-birth.