Tech-Savvy Tortoises Learn To Use Touchscreens

Headbutt the shape, get a treat! 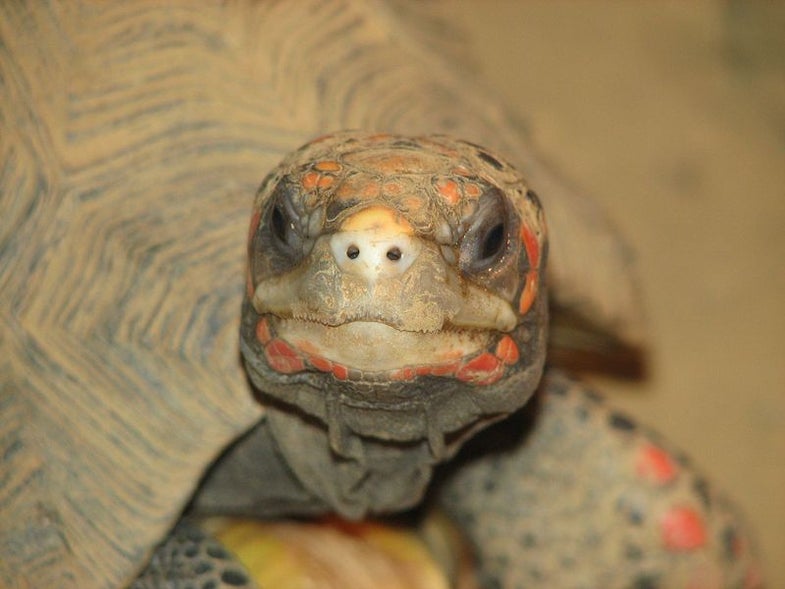 Tortoises are using their cleverness to do more than just win long distance races against hares–now they’re moving into the field of touchscreen technology.

Researchers from the U.K.’s University of Lincoln have successfully trained four red-footed tortoises (native to Central and South America) to touch different objects on a screen. In a video from the university, one of the test tortoises can be seen using his head to tap either a blue circle or a red triangle as they appear on a monitor.

The idea was to learn more about how reptiles navigate their environment. A lot of research has been done on the spatial cognition of mammals and birds, which use the hippocampus to get around. However, reptiles lack this structure in their brains, so they are thought to rely on the medial cortex, which has a lot of the same functions as the hippocampus. Previous studies of tortoises in radial-arm mazes have shown they utilize a mixture of response-based strategies and visual cues to move through their environment.

In this latest study, the researchers wanted to know how these reptiles navigated a two-dimensional space compared to a 3-D one. The four tortoises were placed in front of a screen as various shapes popped up. Each time the tortoises correctly head-butted the object, they were given a treat such as a strawberry. (Apparently tortoises love treats, according to LiveScience.)

The tortoises figured out the touchscreen technology pretty quickly, and two of the subjects—Esme and Quin—went on to apply what they had learned to a real world scenario. During the initial testing, the tortoises were shown two blue circles on a screen, but they were only given treats of they consistently touched either the circle on the left or the circle on the right. Then, when Esme and Quin were given two food bowls that looked like the blue circles on the screen, they only ate from the bowls that were on the same side as the circles they were trained to touch.

“This tells us that when navigating in real space they do not rely on simple motor feedback but learn about the position of stimuli within an environment,” says lead researcher Dr. Anna Wilkinson. (That, or they just really wanted more strawberries.)

Wilkinson hopes the team’s research will help them to better understand the evolution of the brain and cognition. It may also inspire a generation of kids to train their pet turtles to use an iPad.