Hi, new friend. You are pretty. 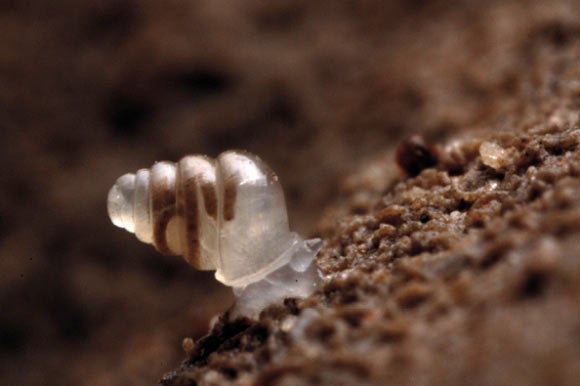 Deep in one of the deepest caves in the world, a cave that reaches more than 4,500 feet below ground, scientists made a startling discovery: a new species of snail with a near-transparent shell.

Zospeum tholussum, an air-breathing land snail, is a brand-new entry in the Ellobiidae family of hollow-shelled snails. It’s very tiny, with a swirled, translucent dome-shaped shell. This type of snail, living as it does thousands of feet below ground, has totally adapted to live in darkness; it seems to have no visual sense, for example, which is a common mutation. Cave animals, including crustaceans, fish, and salamanders, often lose their sense of sight over the millenia; what’s the use of wasting energy on interpreting visual stimuli when there’s no light?

Found more than 3,000 feet below ground in the Lukina Jama–Trojama cave system in Croatia, this particular snail also seems to have a limited ability to move; it mostly stays in the deep, cold cave mud, near running water to keep its body moist. The scientists aren’t quite sure yet how it reproduces or what it eats.

Only one specimen of Zospeum tholussum was found, but a study published in the current issue of Subterranean Biology dives deep into the behavior and patterns of the new snail. You can read it here.