They're not snakes. One species lives right by LAX.

You always knew there was something creepy about LAX. Now, a pair of researchers has discovered four new species of legless lizards—technically not snakes—one of which lives underneath the dunes at the end of a runway at Los Angeles’s major airport. The others live in other sandy areas in California. 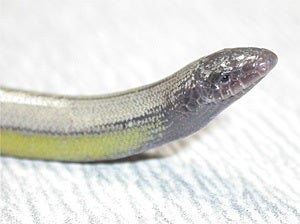 Unlike true snakes, this legless lizard has eyelids and can blink.

Until now, only one non-snake legless lizard species was known to live in California, so the new discoveries make family reunions suddenly much more crowded. The two researchers who found the new lizards had searched for other species over the past 15 years, certain that there must be more than the Anniella pulchra.

The Los Angeles Times interviewed one of the discoverers, geologist James Parham of California State University in Fullerton, who described some of the differences between these new guys, which all belong to the genus Anniella, and true snakes:

‘Anniella can blink at you, but snakes can’t because they don’t have eyelids,’ said Parham, one of the authors of the paper.

They also don’t shed their skin in one piece like snakes do, and they move differently.

Snakes can coil up a lot more, and they are more slithery,’ Parham said. ‘Anniella tend to be more rigid.’

Fun. You can learn more about where to find the new Anniella—or how to avoid their preferred habitat, depending on your inclination—from Reuters and the Los Angeles Times. Both also have slideshows showing the new species, so you may judge whether they are cuter than snakes, as Parham told the Times.