Human Babies Are Hard-Wired To Pay Attention To Lemurs

Does this mean we can have lemur babysitters?????? (Answer: no. Do not do that, please.) 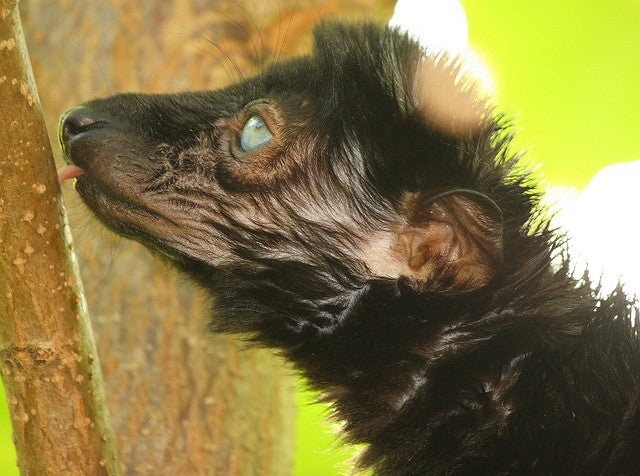 A new study indicates that human babies are born with an innate preference for certain sounds. That makes sense in the most common case–the voices of parents. It’s in the baby’s best interest to be engaged with those sounds! But what about non-human primates?

The study, carried out by researchers at Northwestern University, tested 72 infants between the ages of three and six months. It’s difficult to tell whether babies are engaged mentally; they don’t have much in the way of communication or cognitive faculties at that age. The standard measurement for engagement is, instead, eye focus: where they look and for how long indicates more cognition.

In the experiment, the babies were shown a series of similar shapes–all dinosaurs–and then presented with a choice: another dinosaur, or a fish. While this is going on, audio is played in the background. That audio was either the high-pitched baby-talk from a parent, a similarly high-pitched chatter from a blue-eyed black lemur, human voices played backwards, or an array of mechanical noises. If the baby, when presented with the choice of a dinosaur or fish, chose to focus on the dinosaur, that was taken to indicate a higher level of cognitive engagement. That’s because to focus on the dinosaur means the baby is completing a pattern and understanding the categorization of visual stimuli–indicating that it’s thinking, as much as a baby can think.

Note: the above lemur is an indri, not a blue-eyed black lemur. But the calls are not dissimilar.

The two artificial noises (the backwards voice and the mechanical noises) both resulted in minimal engagement. But, among the three-month-olds, the voices of human parents and of the lemur resulted in a similar high level of engagement. “They were doing some much fancier cognitive dancing during the lemur and human vocalization than in the case of backward speech or tones,” the study’s lead researcher told NBC News.

The six-month-olds, on the other hand, showed a preference for the human voices but hardly any difference between the lemur and the artificial noises. This is assumed to be a combination of higher levels of cognitive development and the simple fact that the six-month-old has spent much more time around human voices, getting comfortable and familiar with them. The researchers think the study shows that humans are born with an instinctive inclination to listen to primates–not just humans, but other primates as well.