This Weird Tiny Frog Hears With Its Mouth

"Talk directly into my mouth, please." 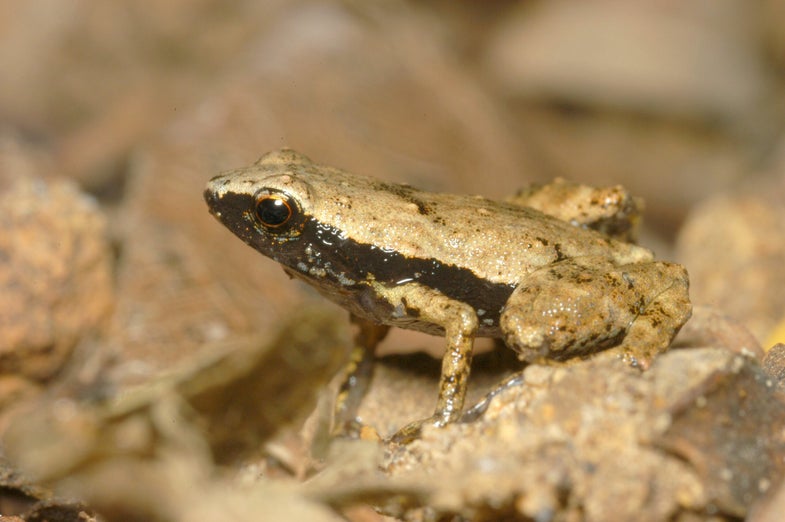 The Gardiner’s Seychelles frog is one of the smallest amphibians in the world, measuring less than half an inch long. But their extreme tininess isn’t the only curious thing about them. As a new study shows, this species of frog has no eardrum and no middle ear–and yet it can croak and hear other croaks. How is this possible?

A team of scientists from a variety of French universities set out to unravel the mystery of the tiny frog. Frogs don’t have ears in the same way that mammals do, with an external cartilaginous sounding board; instead, their eardrums are directly on the skin. But the Gardiner’s Seychelles frog doesn’t even have that.

First, the scientists had to figure out if the frogs could even hear, so they recorded calls from other frogs and played them through speakers. The test frogs responded, indicating that they can indeed hear. But x-rays showed that the frog’s bones weren’t conducting the sound (as our own jawbones do), nor were the muscles or organs of the frog. So the scientists hit the computers and ran a simulation: what if the frog’s mouth was directing the sound to the inner ear, a cavity within the frog’s skull that hosts reverberated noises. And it worked! The math showed that this method could indeed allow the frog to “hear.”

It’s not the first frog to hear with something besides an eardrum; back in 2001, a team of scientists found frogs that hear through their lungs. But this is the first we’ve seen that uses its mouth (at least, we think it does).

The evolution of eardrums dates to the separation of Gondwana, the ancient supercontinent; the scientists suspect that the frog is a holdover from that time, unchanged due to its isolation on a few islands in the Seychelles, off the coast of Madagascar. By studying the Gardiner’s Seychelles frog, they’re hoping to gain some insight into what animals were like in Gondwana, and what made them different from more recently evolved animals.