The flu was clearly on our editors' minds, but they seemed to have left the more straightforward reporting to other outlets. 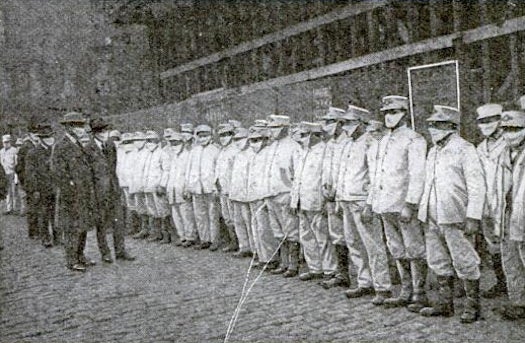 _This year marks the centennial of the start of World War I. To honor it, _Popular Science _is combing through our archives to bring you the best of our original war coverage–from the emergence of tanks, airplanes, and other military tech, to essays examining the relationship between war and eugenics. _

Just as the First World War was winding down, another disaster struck: The so-called “Spanish flu,” an influenza virus with unique mutations that made it unusually virulent and deadly. Anywhere between 20 percent and 40 percent of the world’s population contracted it. An estimated 50 million people died, including about one person out of every 160 in the U.S. War conditions hastened the disease’s spread, as troops moved around the world and the war effort left few healthcare workers to administer to civilians.

The pandemic left a lasting mark on societies and science, so we thought contemporary issues of Popular Science might have some interesting reporting on the phenomenon. They did. But, we discovered, some of it was peculiar.

Our earliest Spanish flu story took an unusual, but serious angle on the story. It looked at how the outbreak prompted the city of Chicago to give its street-cleaners simple masks to wear at work. The masks were akin to early gas masks developed for the war. “Germs May Be Just as Deadly as German Gas,” was the somber headline. That was in December 1918.

Chicago was not the only worried workplace. An unnamed factory put wire cages around its drinking fountains to ensure workers kept their mouths at a sanitary distance from the pipe opening, the magazine reported in April 1919. (But what kept their mouths off of the wires, we wonder.)

Some cities began requiring residents to wear gauze masks, which, in reality, provided no protection against the virus. Popular Science was not a fan of such measures, complaining in May 1919 about “localities where the authorities think that influenza can be cured by legislation.” So the magazine published a how-to for making a mask that allows the wearer to smoke while wearing it. However, to comply with flu-mask laws, the DIY prophylactic had no outlet for exhaled smoke. You were just supposed to swallow.

Lastly, the March 1919 issue noted that orange-sellers inflated their prices during the pandemic. We covered that story by delving into the thoughts and feelings of an orange:

By March 1942, the magazine was reporting that new vaccines against yellow fever, influenza, typhus fever, and measles would protect people during the Second World War.

We were never able to find a straightforward, contemporary feature about the spread of the Spanish flu. Perhaps other news outlets covered those kinds of stories, at that time. Generations later, however, the magazine dedicated a page to the re-creation of that historic flu strain.