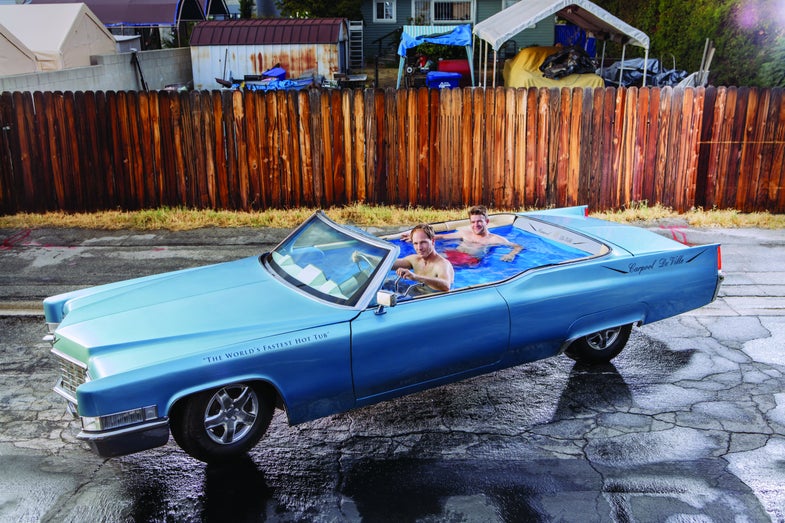 This vehicle gives a whole new meaning to the term "carpool." Engineers Duncan Forster and Phil Weicker converted a Cadillac DeVille into a working hot tub on wheels. According to Forster, "You haven't really lived until you've sat in a hot tub and watched the world roll by.". Photograph by Jeff Newton
SHARE

Duncan Forster and Phil Weicker built their first tub-on-wheels as undergrads at McMaster University in Ontario, Canada. With a fellow student, they transformed an abandoned 1982 Chevy Malibu into a pool. “This thing was hideous,” Forster says. “The car barely ran, but we were really proud of it.”

“You haven’t really lived until you’ve sat in a hot tub and watched the world roll by.”

A successful Kickstarter campaign funded a trip to Utah’s Bonneville Salt Flats for Speed Week 2014. But after arriving in the desert with their mobile pool, a flooded track—of all things—canceled the race, and with it, their shot at an official record.

Undeterred, Weicker raced the car off the track. The extra mass on the rear axle caused it to accelerate so quickly that a Dodge Ram chase vehicle couldn’t keep up, and hitting a small bump led to scary side-to-side oscillations. “It was exhilarating and terrifying at the same time,” Weicker says.

This article originally appeared in the December 2014 issue of Popular Science, under the title, “Hot-Tub Drive Machine.”