Millennials want spirits—with none of the alcohol. Here’s how distilleries make it work.

The science behind the latest (non-)drinking trend. 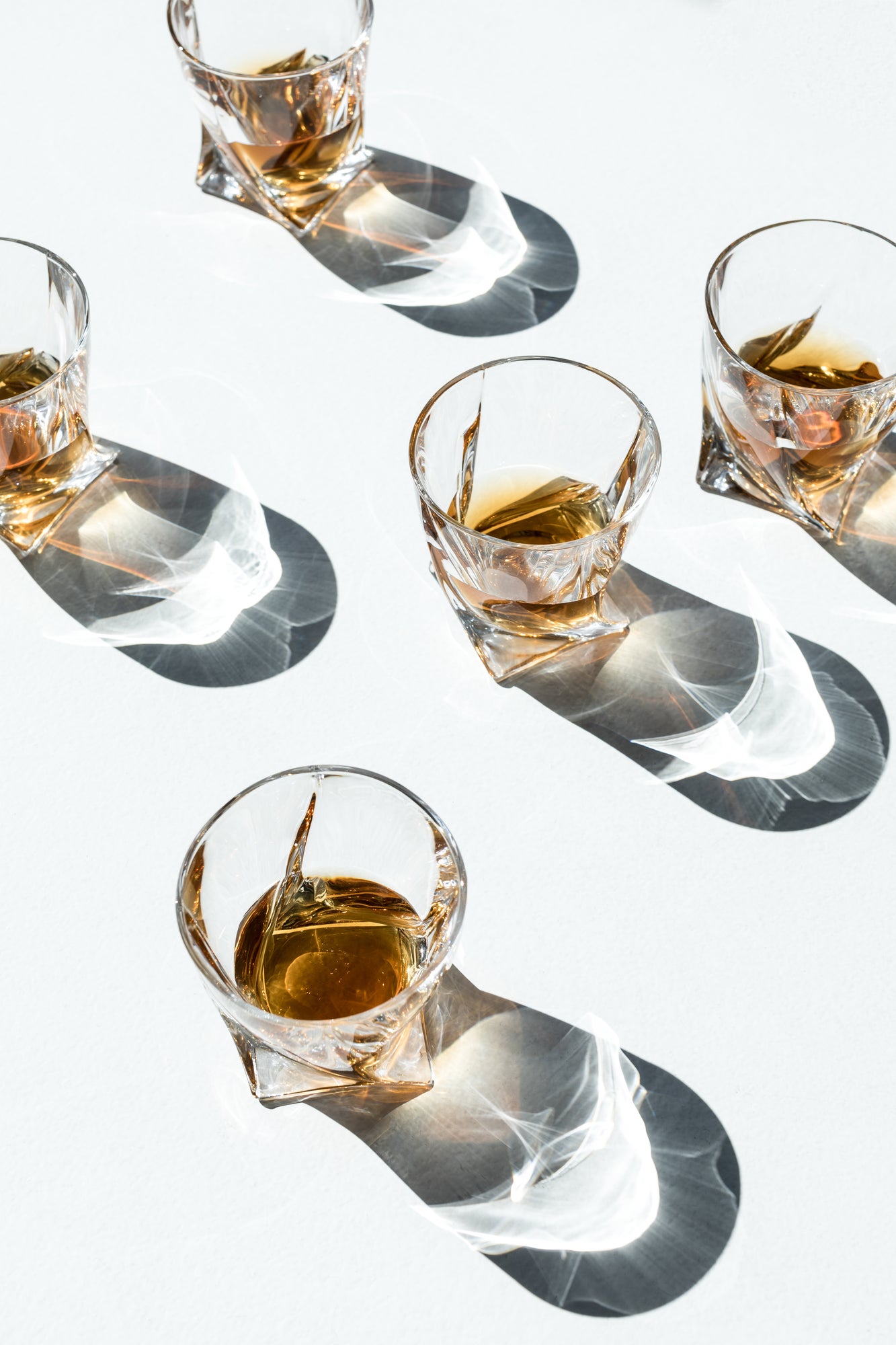 In 19th century British-occupied India, it was quinine-rich gin and tonics, the better for warding off malaria. In the hey-days of Y2K, it was the Cosmo, pink and, with a little lemon rind, well-accessorized, much like its patron saint and Big Apple icon Carrie Bradshaw. But in 2019 the biggest trend in alcoholic beverages may just be not drinking at all.

Legions of so-called “sober curious” individuals are putting the shot glasses down, and seeking an alternative to a punch-drunk life of bloating, inhibited executive function, and, some might say, fun. This mocktail movement is fueled, Nicole Fallert wrote in a recent article for Vox, by “a new audience of information-laden young people who are willing to buy seltzers, nonalcoholic beers, and even water in the name of wellness.” These might be the same friends who talk about eliminating meat or other animal products in favor of a “plant-based diet,” or swapping their standing coffee order for decaf drinks.

While water is always an option, it’s not the one beverage companies hope you’ll choose. O’Doul’s, the original alcohol-free beer, got a millennial-baiting face lift last year, according to Fast Company. You can now buy a “Heineken 0.0.” Even AB InBev, the parent company of Budweiser, Corona, and Stella Artois, wants in. Bon Appetit reported earlier this year that the company plans to make “no- or low- alcohol” drinks 20 percent of its beer business by 2025. Alcohol-free spirits are booming just the same: Ceder’s, Whissin, Stryyk, Herbie Virgin—the list of “sober curious” spirits goes on.

But what makes these “no- or low-” drinks alcohol free? And what do they have to offer, once the proof’s gone poof?

Morten Sørensen is the founder of the Danish company Ish Spirits. In October 2017, he decided to go 100 days without alcohol, and found himself with few happy hour options. One night, he asked a bartender for an alcohol-free Dark ‘n Stormy, a mixed drink made of dark rum and ginger beer. She kindly brought back a ginger beer and poured in some apple juice—nice, but not what he was hoping for.

Sensing a “missing link,” Sørensen began developing the Ish brand—sturdy bottles, black labels, and a diamond motif. But to actually get the taste right, he turned to Firmenich, the Swiss fragrance and flavor company. He told his new collaborators he wanted to create drinks that tasted authentic, used natural ingredients, and felt actually satisfying. “I don’t know want it to be lab-created, synthetic, bubblegum thing,” Sørensen says. They’ve developed and released two flagship drinks: “gin-ish” and “rum-ish.”

Like real gin, “gin-ish” is flavored with juniper berry and coriander seeds. The berries are pleasantly tart, with piney notes and “hints of citrus.” The seeds, meanwhile, are peppery, with some citrus and woody flavors of their own. Together, they give Sørensen’s product that signature gin flavor. But unlike the traditional stuff, grain alcohol is absent from Ish—and, as a result, so is alcohol’s signature bite. To compensate, the Firemnich team isolates capscium, which they extract from the shells of chili seeds. “That’s what gives it that burn in the back of the throat,” Sørensen says. “We need that heat to make it satisfying—to make it that adult drink.”

The botanical basis of gin made it a natural fit for Ish, Sørensen says, because he needed only to replicate ingredients, not the production process. “But rum is a different beast.” Alcoholic rum is a product of distilled sugar cane. The sweet slop is aged in a wooden barrel, from which it slowly incorporates new flavors. To replicate this process, Sørensen uses vanilla and nutmeg—things traditional rum barrels would have transported on long sea voyages. “That’s to get almost a caramel kind of feel,” he says. Just as with gin-ish, rum-ish has capsicum for a kick.

But to get a truly dark rum required a little more engineering—and it turns out that slap-dash virgin Dark ‘n Stormy wasn’t too far off. “We found out that if we take apples, and bake them all the way down, so they get all dark and mushy, we put that in, and it colors the whole thing,” Sørensen says.

Like O’Doul’s beer, which contains roughly 0.4 percent alcohol, Ish Spirits is in the low (as opposed to no) alcohol category. Sørensen says alcohol is important to preserving and heightening the flavors in the drink. At 0.5 percent alcohol, Sørensen says they can keep the drinks savory, while still staying under the 1.2 percent threshold at which Europe regulates beverages as alcoholic products. These calculations could also help Ish as it expands into the United States. As anyone who’s ever tried to purchase a kombucha knows, federal regulations are tricky, but drinks under 0.5 percent alcohol are considered non-alcoholic, and you can typically get through the Whole Foods checkout without an ID.

While Ish Spirits has focused on replacing tried-and-true alcoholic beverages, Seedlip, an alcohol-free British spirits company, has developed its own signature flavors. Inspired by a 1651 book called The Art of Distillation, Seedlip founder Ben Branson turned 300-year-old herbal remedies into a line of luxury bases for mixed drinks, all free of alcohol, sugar and sweeteners, and “allergens.” (The Seedlip website explains in great detail that the beverages are free of wheat, barley, rye, oats, spelt, something called kamut, crustaceans and shellfish, eggs, fish, peanuts, milk, nuts such as almond, hazelnut, walnut, cashew, pecan nut, Brazil nut, pistachio nut, Macadamia nut, a nut called the Queensland nut, celery, mustard, sesame seed, sulfur dioxide, the “derivatives” of every item listed thus far, and another thing I’ve never heard of outside of a Harry Potter novel called lupin… and also its derivatives.) In fact, Seedlip and other non-alcoholic drinks are absent of so many things, you can’t help but wonder what they actually entail.

Fortunately, the answers are also right there on the Seedlip website, often alongside advice on how to grow the ingredients yourself. The company’s three spirits—all shockingly pungent—are Spice 94, an “aromatic” mix of allspice, grapefruit, green cardamom, lemon, and oak; Grove 42, a “citrus” blend of blood orange, ginger, lemongrass, and mandarin; and Garden 108, an “herbal” tincture of peas, rosemary, and spearmint.

These bases are commonly used in creative new cocktails. It’s found on both sides of the pond, but Seedlip’s most notable home (for motel saloon enthusiasts, anyway) is at The American Bar at the Savoy Hotel in London, widely considered one of the best watering holes in the world. Less prestigious but perhaps even more popular uses range from home-made tequila-free margaritas to apothecary-style shots. “We don’t have to conform to any existing drinks categories or flavors and therefore have the freedom to experiment with pairing different plants in different ways, much like a chef might approach a dish,” Branson wrote via email.

Both Seedlip and Ish are distilled products. But the end goal of this process differs from its role in traditional alcohols. With a regular brandy, rum, or whiskey, distillation is a way of obtaining a higher proof. Liquors are converted into vapor and condensed into liquid; distillers repeat the process several times until they achieve a desirable alcohol-to-water ratio. In the case of Ish, distillation is actually one of several ingredient-specific “extraction methods,” alongside steaming and decanting. For example, the Madagascar vanilla beans in rum-ish are submerged in a water bath, leaving behind a liquid for mixing. Meanwhile, Seedlip’s six-week process begins with “bespoke maceration,” where workers mix ingredients with neutral grain spirit and water. They run the resulting “mash” through a copper pot still to remove the alcohol and concentrate the flavors. “This is about capturing the true character of our plants, ironically, using alcohol,” Branson writes.

All of this sober sipping adds up: A 23.7 ounce Seedlip bottle costs $36. Ish plays in the same ballpark, with bottles costing about $37, despite neither product being subjected to standard alcoholic export fees. That’s much more than most previously existing options for non-drinkers, but such tinctures admittedly offer something unique: the social and physical sensation of enjoying an adult beverage, as opposed to swapping out an evening cocktail for root beer.

Seedlip and similar products may appeal to individuals recovering from alcohol dependency. As The Atlantic recently reported, drinking is a very social activity, something many people do not just with friends, but with others in their professional network. Alcohol-free mixed drinks may offer sober individuals an alternative to declining a happy hour invitation outright. Not all experts endorse this choice: “[A]ny cues associated with your favorite drink are going to elicit all kinds of changes in the brain that initially mimic the changes that elicit cravings in the first place,” George F. Koob, director of the National Institute on Alcohol Abuse and Alcoholism, told Addiction.com in an article about the pros and cons of mocktails. But needs vary by person, and even the stage of recovery an individual is in.

The wellness movement—a cultural phenomenon characterized by the dogged desire to be physically, mentally, and spiritually healthy, even at great expense and often with the supposed help of pseudo-scientific cures—is another driving force in the uptick of alcohol-free alcohol, and the major motivator for both Seedlip and Ish. Just as Sørensen was motivated by his own 100-day alcohol fast, Branson told me that his goal is “to rid the world of poor, fruity and sweet soft drinks.” That’s a large part of why Seedlip puts its extensive list of ingredients online. Customers concerned about what they’re putting in their bodies demand a level of transparency to which soda-makers aren’t accustomed.

A cultural emphasis on optimization may also be at work. “[E]ven the fact we are all suddenly very busy,” Branson writes, means we’re pursuing “less but better alcohol, better cocktails, better food, better ways to socialize.” At the same time no one wants to spend time or money on things that don’t advance their well-being, many people are willing to spend a lot of money on things that do.

Still, Sørensen says he’s been surprised by the diversity of the customers turning to Ish. Some can’t drink because they’re on a special diet for epilepsy or diabetes or athletic competition. Some are pregnant, or acting as designated drivers, and want to take a responsible swig. And still others are hemmed in by institutional rules, like New York City’s 200 foot law, which impedes establishments within 200 feet of a school or place of worship from selling liquor.

Ish, Seedlip, and their “low- or no-” ilk certainly won’t be everyone’s cup of teetotaler. But investors, wellness enthusiasts, and sober curious individuals are still toasting to the future of the alcohol-free adult beverage market.