Scientists Are Taking Apart Beer To Make The Next Antibiotics

The hops that make your beer delicious also fight disease 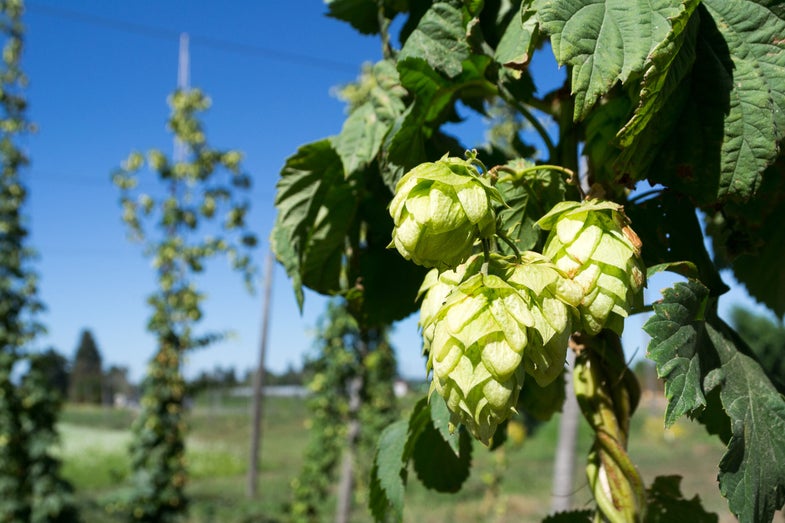 Hops, the flowers of a plant in the marijuana family, do more than make your beer taste bitter, citrusy, and delicious—they’ve been shown to have a number of positive health effects, including preventing neurodegenerative disorders like Alzheimer’s and Parkinson’s, treating insomnia or anxiety, and even combatting cancer. Now scientists from the University of Idaho are working to extract two of the most important compounds from hops in order to use them in pharmaceuticals. The researchers presented their work this week at the meeting of the American Chemical Society in San Diego.

The researchers were focused on two acids in particular: humulones, which scientists have long known have antioxidant properties, and lupulones, which aren’t as well understood. Both are bitter-tasting and, together, the two combat bacteria, a quality that the researchers would like to harness in pharmaceuticals. The scientists would need to isolate and extract the acids in order to use them in medication or to create them synthetically, but the process is difficult, and in the past there hasn’t been any way for the researchers to confirm that they had isolated the right compound.

So the researchers are developing a process to synthesize three types of humulones. They start with a common plant-derived compound called phloroglucinol, then perform a number of techniques to reach an intermediate product. They’re still perfecting the final step of turning those products into synthetic acids, but the researchers say they’re close to doing so. It’s taken a lot of trial and error to get this far, they say.

Finding new antibacterial agents is no easy task—scientists have a hard time isolating them in the lab, in part because of the conditions in which they’re usually found. More bacteria-fighting compounds could be helpful in the near future as antibiotic resistance becomes a widespread health concern.

Ultimately, the researchers hope to create a library of these types of acids that could lead to the “next generation of medicines,” according to their abstract. They eventually hope to partner with a pharmaceutical company to develop these medications.