Before there was a periodic table, there was chaos 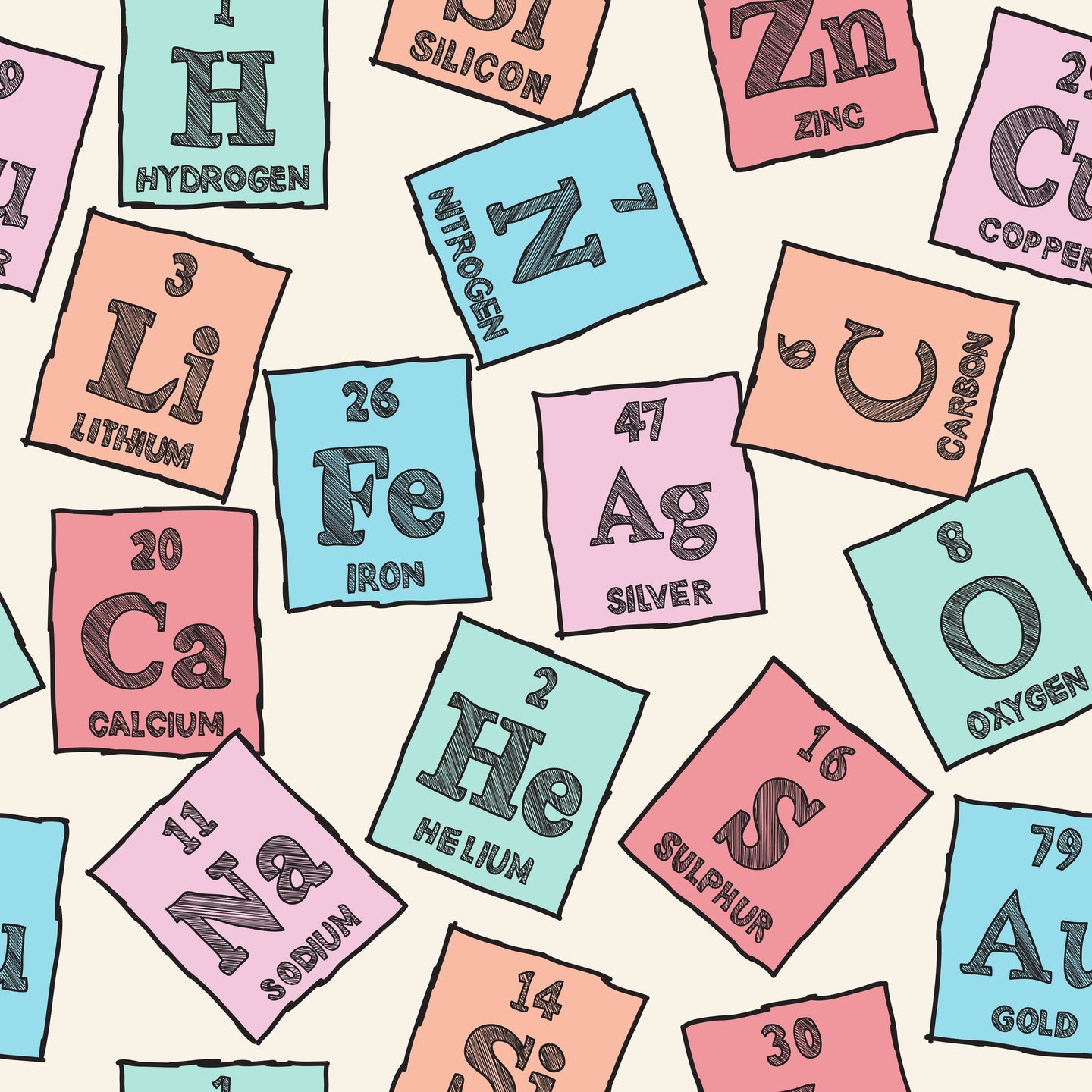 In the following excerpt from “Mendeleyev’s Dream: The Quest for the Elements,” author Paul Strathern describes the state of chemistry in the years leading up to Dmitri Mendeleyev’s invention of the modern periodic table.

In the 18th and 19th centuries, several elements were being discovered almost every decade. This profusion of new elements with an ever-widening range of properties soon began to provoke questions. Precisely how many elements were there? Had most of them already been discovered? Or would there perhaps turn out to be innumerable elements? This soon led to more profound speculations. Somehow, amongst all these elements, there must be some kind of fundamental order. Dalton had discovered that the atoms of each element had different weights — but surely there had to be more to it than this? Berzelius had noticed that elements appeared to have different electrical affinities. Likewise, there appeared to be groups of different kinds of elements with similar properties — metals which resisted corrosion (such as gold, silver and platinum), combustible alkali metals (such as potassium and sodium), colorless, odorless gases (such as hydrogen and oxygen) and so forth. Was it possible that there was some kind of fundamental pattern behind all this?

Chemistry had achieved its scientific status and continuing success largely through experiment, and such theoretical thinking was viewed at best as mere speculation. Why should there be some kind of order amongst the elements? After all, there was no real evidence for such a thing? But the rage for order is a basic human trait, not least amongst scientists. And these speculations eventually began to find support, if only from scraps of evidence.

The first of these came from Johan Dobereiner, the professor of chemistry at the University of Jena. Dobereiner was the son of a coachman, and was largely self-educated. He managed to obtain a post as a pharmacist, and eagerly attended the regular local public lectures on science. In 1829 he noticed that the recently discovered element bromine had properties which seemed to lie midway between chose of chlorine and iodine. Not only that, its atomic weight lay exactly halfway between chose of these two elements.

Dobereiner began studying the list of the known elements, recorded with their properties and atomic weights, and eventually discovered another two groups of elements with the same pattern.

Strontium lay halfway (in atomic weight, color, properties, and reactivity) between calcium and barium; and selenium could be similarly placed between sulphur and tellurium. Dobereiner named these groups triads, and began an extensive search of the elements for further examples, but could find no more. Dobereiner’s ‘law of triads’ appeared to apply only to nine of the fifty-four known elements, and was dismissed by his contemporaries as mere coincidence.

And that was it, for the time being. Chemistry had suffered enough from mistaken theories (four elements, phlogiston, etc.). The way forward now lay through experiment.

It would be over thirty years after Dobereiner’s law of triads before another significant attempt was made to discover a pattern in the elements. Unfortunately, this contribution was to come from a scientist whose brilliance was matched only by his waywardness.

Alexandre-Emile Beguyer de Chancourtois was born in Paris in 1820. His first love was geology. De Chancourtois didn’t turn his considerable talents to chemistry until he was in his forties. In 1862 he produced a paper describing his ingenious “telluric screw,” which demonstrated that there did indeed appear to be some kind of pattern amongst the elements. De Chancourtois’ ‘telluric screw’ consisted of a cylinder on which was drawn a descending spiral line. At regular intervals along this line de Chancourtois plotted each of the elements according to its atomic weight. He was intrigued to find that the properties of these elements tended to repeat when the elements were read off in vertical columns down the cylinder. It seemed that after every sixteen units of atomic weight the properties of the matching elements tended to exhibit striking similarities with those vertically above them on the cylinder. De Chancourtois’ paper was duly published, but unfortunately he chose to revert to geological terms when referring to certain elements, and at one stage even introduced his own version of numerology (the alchemy of mathematics, in which certain numbers have their own esoteric significance). To make matters even worse, the publishers omitted to include de Chancourtois’ illustration of the cylinder, thus rendering the article virtually incomprehensible to all but the most persistent and informed reader.

This subject evidently attracted a certain type of scientific thinker inured to ridicule. In 1864 the young English chemist John Newlands came up with his own pattern of the elements, unaware of de Chancourtois’ cryptic researches. John Newlands was born in London in 1837, the son of a Presbyterian minister.

Newlands discovered that if he listed the elements in ascending order of their atomic weights, in vertical lines of seven, the properties of the elements along the corresponding horizontal lines were remarkably similar. As he put it: “In other words, the eighth element starting from a given one is a kind of repetition of the first, like the eighth note in an octave of music.” He named this his “law of octaves.” In the tabulated list the alkali metal sodium (the 6th heaviest element) stood horizontally beside the very similar potassium (13th heaviest). Likewise, magnesium (10th) was in line beside the similar calcium (17th). When Newlands expanded his table to include all the known elements he found that the halogens, chlorine (15th), bromine (29th) and Iodine (42nd), which exhibited graduating similar properties, all fell in the same horizontal column. Whereas the trio of magnesium (10th), silenium (12th) and sulphur (14th), which also had graduating similar properties, fell in the same vertical line. In other words, his law of octaves also seemed to incorporate the scattered resemblances noted in Dobereiner’s law of triads.

Unfortunately Newlands’ tabulated law of octaves also had its faults. The properties of some elements, especially those of higher atomic weight, simply didn’t tally. Even so, Newlands’ law of octaves was a definite advance on any previous ideas. Indeed, many now regard it as the first solid evidence that there was indeed some comprehensive pattern to the elements. In 1865 Newlands reported his findings to the Chemical Society in London, but his ideas proved ahead of their time. The assembled worthies merely ridiculed his law of octaves. Amidst the general merriment, one even asked him sarcastically if he had tried arranging the elements in alphabetical order. It would be a quarter of a century before Newlands’ achievement was finally recognized, when the Royal Society awarded him the Davy Medal in 1887.

Dobereiner had spotted resemblances between isolated groups of elements. De Chancourtois had discerned a certain pattern of recurrent properties. Newlands had extended this pattern and even incorporated Dobereiner’s groups. But still his law of octaves didn’t work overall. This was partly due to contemporary miscalculations of various atomic weights and partly because Newlands made no allowances for hitherto undiscovered elements. But it was also because the rigidity of Newlands’ octave system just didn’t fit.

It was becoming increasingly obvious that there was some kind of pattern to the elements, but the answer was evidently more complex. Chemistry appeared to be tantalizingly close to glimpsing the blueprint of the very elements upon which it was based. Euclid had laid the foundations of geometry, Newton’s gravity had explained the world in terms of physics and Darwin had accounted for the evolution of all species—could chemistry now discover the secret which accounted for the diversity of matter? Here, possibly, was the linchpin which could unite all scientific knowledge.

From MENDELEYEV’S DREAM by Paul Strathern. Reprinted with permission of Pegasus Books.