Termites built themselves a landfill the size of Great Britain

The insect architects have been building these trash heaps for 4,000 years. 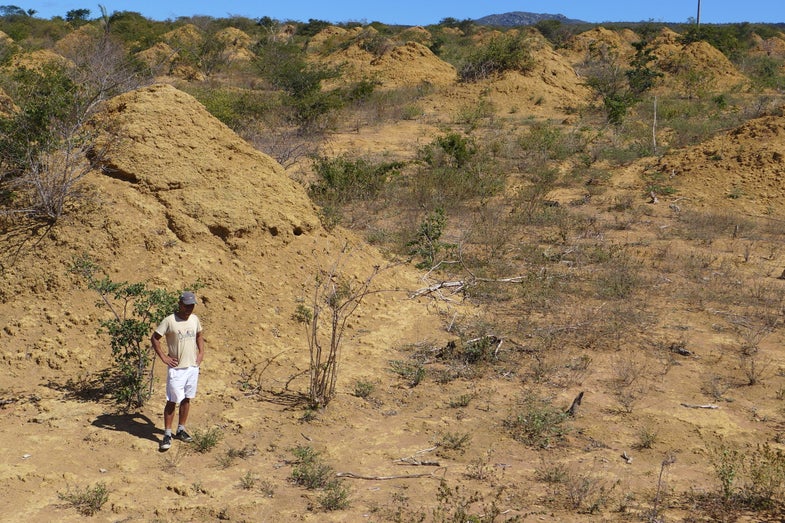 Millions of miles of tunnels go largely unnoticed beneath the feet of farmers in northeastern Brazil. About four inches across, these smooth and twisting passageways penetrate at least five feet into the earth, likely more. As their architects carefully executed the subterranean engineering grain by grain, they unwittingly wrought vast changes above ground too.

After four thousand years, the inhabitants of the overworld have finally taken an interest. Countless termite mounds dot the landscape of northeastern Brazil, where they are known as murundus, but only recently have they come to the attention of entomologists. According to a new theory described Monday in Current Biology, the button-sized insects built these monuments not to live in, but rather as debris depositories for their underground excavations. The scale of their activity cements the critters’ reputation as ecosystem engineers on par with any other species on the planet.

“It’s amazing to think that one-centimeter long termites did this,” says Roy Funch, a botanist at Brazil’s Universidade Estadual de Feira de Santana and the driving force behind the study of the mounds. “They’re all over the place. Not just 10 or 20, but literally millions of them.”

The scope of the phenomenon defies visualization. Each structure looks like an upside-down ice cream cone reaching eight feet above the ground and spanning about 30 feet at its base. Arranged in a striking honeycomb pattern, an estimated 200 million murundus stretch across nearly 90,000 square miles of Brazilian scrubland—a swath similar in size to Great Britain. All told, if you lumped that dirt together you’d need about 4,000 great pyramids of Giza to hold it, or a single cubical box 2.3 miles on a side.

Perhaps more mysterious than the mounds’ extent is their constant spacing. Funch initially assumed each cone represented one colony defending its turf against encroaching rivals, but when given the chance to duel most neighboring soldiers don’t take the bait, he found, suggesting that local clusters tend to belong to one “family” of friendly termites. They will fight with outsiders brought from dozens of miles away though, so the whole zone must contain many different termite groups.

Instead, the secret to the masses’ positioning lies in their function—or lack thereof. Some termite species live inside their constructions while others use them for ventilation, but the murundus are plain piles of dirt, sealed to the outside world. Resembling mini-volcanoes in structure, they have just one central column the termites climb before sending dirt tumbling down the outer wall. Rather than serving as homes or functional accessories, the team suggests they are mere heaps of rubble.

“It’s the difference between a high-rise building and a slag pile,” Funch says.

Life as a Syntermes dirus isn’t easy. Their squishy bodies dry out fast under the Brazilian sun, so they don’t leave their underground lairs during the day. Squads of a few dozen workers emerge each night to forage for leaves, but only under the protection of soldiers with fearsome, clicking mandibles—locals call them bate-cabeças, or head snappers.

With the overworld such a hostile place, the termites aim to spend all their time in their roomy and ever-expanding tunnel network, so having evenly spaced debris piles helps make sure that they’re never too far from a place to dump some dirt.

Scott Turner, a physiologist at SUNY who studies termites in southern Africa, isn’t surprised that these Brazilian termites can reshape the world to suit their needs. “It’s one of the underappreciated stories about social insect biology, just by the simple act of moving soil these things can carry out incredible feats of modification of their environment,” he says. He thinks it would be even more interesting to learn just how much dirt the insects are moving, which can be measured by embedding styrofoam beads in the soil and seeing how fast the termites clear them away. Doing so would help show how erosion might balance out this mound growth.

Funch first took an interest in the mounds in the early 80’s after finishing a tour in the Peace Corps. They were a familiar feature of the local landscape, but because they were buried under a 20-foot layer of interwoven spiny bushes and trees known as caatinga, no one had taken the time or risked the scratches to study them in depth. Eventually, local activity made them more accessible. “If the farmers hadn’t opened some of the roadside land for grazing, no one would have seen these mounds,” Funch says.

Still, another 30 years went by before Funch got the chance to take on the project himself. A botanist by training, he applied to do a post-doctoral study on the caatinga vegetation as an excuse to dig into the mounds. His recent results build upon his 2015 publication introducing the earthworks, as well as a 2017 survey of satellite imagery by French researchers documenting their extent.

Despite the fact that scientists have lived largely ignorant of these cones, they’ve been around for quite a long time. Funch dated 11 samples from all over northeastern Brazil with a relatively new technique that uses cosmic ray strikes as a natural clock. As particles from deep space slam into crystals inside the mounds, electrons get knocked loose and stuck in new locations at a predictable rate. When researchers heat or illuminate the crystals in a lab, the electrons fall back to their original locations, giving off a faint flash. Based on the number of these flares, the team determined that the mounds sampled ranged from about 700 to nearly 4,000 years of age. In future studies, Funch hopes to sample more mounds to get a more accurate range, and also different layers within a single mound, which would give an idea of how long a mound takes to form.

His team has more dramatic plans as well. He and co-author Stephen Martin, an entomologist at the University of Salford in England, have pushed fiber-optic cameras down the tunnel as far as they could go, but twists and turns stopped them before they could find a queen’s chamber. The next step, Funch says, is to “back-hoe a few mounds into oblivion” and mount a full expedition into this unexplored world, both to locate a queen and to figure out the basic structure of the tunnel network. “We don’t know anything about the architecture or the geography,” he says. “We’ve only just scratched the surface.”