An engineer got the scoop on square poop. 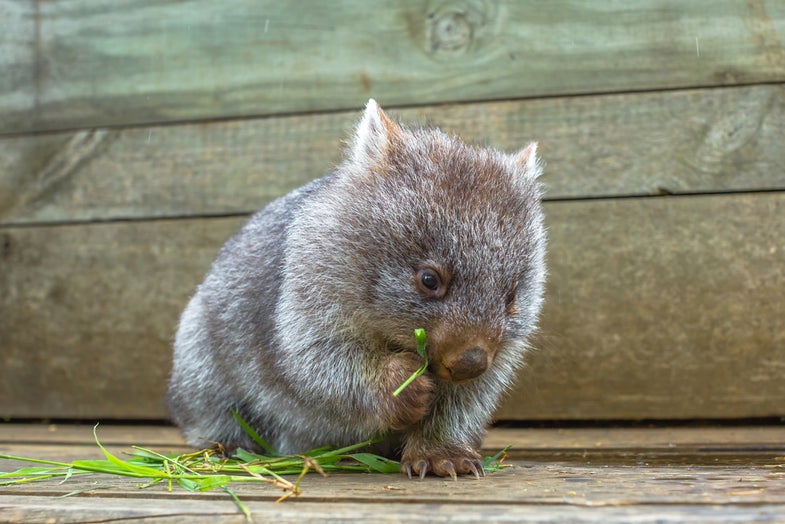 With a protective shield of bone and a thick pad of fat and muscle meant to repel burrow-invading predators, wombats have a lot of strange stuff going on with their butt anatomy. A new paper presented this weekend at an American Physical Society conference provides insight into the most enduring mystery of the marsupial’s weird hiney: the shape of its poop.

Wombat feces are cubic, a fact that you should remember in case it comes up in bar trivia. This isn’t news—people have been wondering about the cubic poop for a long time. Past wombat poop thinkers have speculated that perhaps the three extant species of wombat have a square anus, which forms the dry feces into dense little cubes on their way into the world, or perhaps the wombat’s stomach somehow digests the food into the unusual shape. Patricia Yang, a mechanical engineer at the Georgia Institute of Technology, found the real answer. She’s hoping that her finding will help humans come up with a new way to manufacture cubes.

Yang went looking for the truth after learning about the wombat’s unusual poop shape at a conference earlier this year. She and her three co-authors obtained fresh intestines from wombats that were euthanized after being hit by cars in Tasmania. (Wombats are threatened by human encroachment, like many animals, as well as sarcoptic mange, or scabies, a contagious skin disease.) For Yang, who initially didn’t believe that wombat feces could be cubic, given how uncommon that shape is in nature, seeing them in all their angular glory was “surprising,” she says.

The team found that the poop in the upper parts of the intestines was liquidy and soft, while the poop in the last 8 percent of their intestinal tract was the iconic cube shape—and very, very dry. That final section of the wombat’s entrails has walls that vary in how elastic they are. The pressure of the feces against the walls forms it into cubes a little less than an inch in diameter.

“This work is a collaboration among engineers and biologists,” Yang says. Her co-author Scott Carver is a wildlife ecologist at the University of Tasmania. Yang’s hoping the discovery will help highlight the weird and wacky world of wombats and raise their profile. She also hopes that this discovery will yield insights that could help industry. “Currently I’m thinking of food manufacturing,” she said in a press conference held earlier today. Chocolate cubes aren’t the only thing on her mind: she’s also thinking about animal food like hay bales for horses.

Although now scientists know how wombat poop becomes square, we still only have hypotheses about why. Yang’s is that the stackable shape helps wombats clearly mark their territory with scat—but others aren’t so sure. “I’m not 100% convinced about the stackable idea,” says Sunny Jung, a Cornell engineer who studies the mechanics of fluids in nature. Mike Swinbourne of the University of Adelaide, who studies wombats, told National Geographic he wasn’t persuaded either, and hypothesized that forcing the poop into the unusual shape was more likely a way of squeezing every last drop of much-needed moisture from it. As ever, more research is needed, but at least one enduring mystery has been solved.