This Gel Glows When It Detects Pollutants 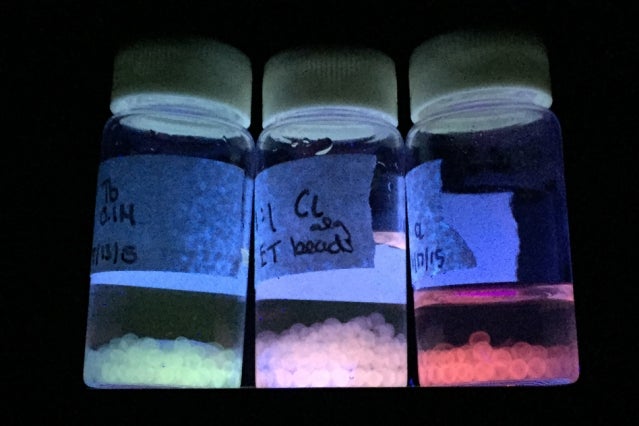 A team of researchers from MIT has created sensitive metallic polymers that change color in response to chemical or physical variations in their surroundings, according to a study published recently in the Journal of the American Chemical Society. The material could be used to detect chemical changes in an environment, or even mechanical changes in structures or fluids, as the study authors note in a press release from MIT News.

The gel is made of a common polymer called polyethylene glycol combined with rare earth metals. These form special connections called metal-coordination bonds that make the gel hardy and self-healing, but still very sensitive to its environment. When the bonds are altered by the presence of a particular molecule that the researchers select, the material emits light. Importantly, the material starts out white, and changes to green or red when the environment changes—that makes it easier to compare than two slightly different shades of green, for example.

The gel could be used as a litmus test to detect if particular pollutants are present in an environment, or left in the environment to detect changes over longer periods of time. If it is made into a coating, it can be applied to structures or other surfaces like pipes. A color change could alert engineers or caretakers to minute changes before they cause a major problem.

And though the researchers don’t have immediate plans to manufacture the material, it shouldn’t be too hard; the hydrogel scaffold is easy to find, since it is used in many biology and physics experiments (though, presumably, the rare earths are in shorter supply).

The material sounds like a great option for sensitive environments, as its components have low toxicity. But it’s not clear how well the polymer would hold up in rugged environments, or if its ability to change color would be affected if it wore down.