In the grand tradition of Silicon Valley, leaked photos of the next generation of iPhone have emerged, causing much rumination... 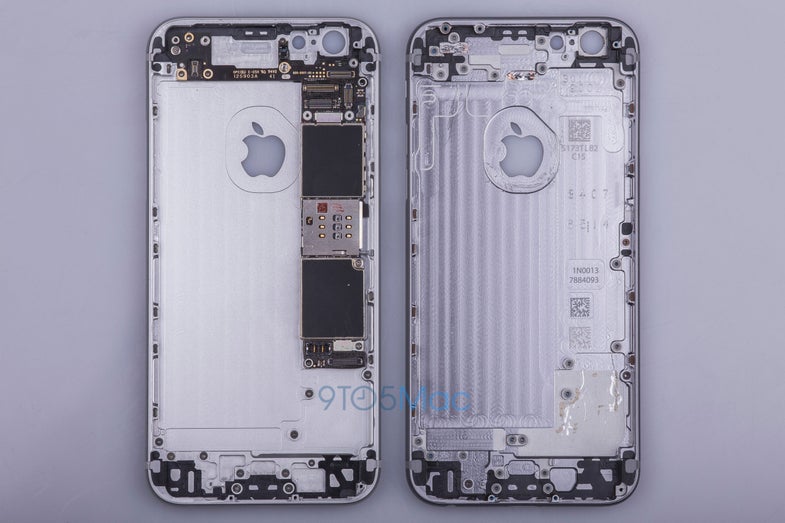 A leaked image of the iPhone 6S. 9to5Mac
SHARE

In the grand tradition of Silicon Valley, leaked photos of the next generation of iPhone have emerged, causing much rumination and ado concerning future additions to the iconic cell phone.

One thing is clear: the design won’t change much from the iPhone 6. But, as we’ve seen with the jump from iPhone 4 to 4S with processor upgrades, and from the 5 to the 5S with the addition of the fingerprint scanner, Apple’s next flagship phone will include hardware upgrades. Talk of the town, from sources like 9to5Mac, says that the most notable changes will be the addition of Force Touch, the pressure-sensitive capability first implemented on the Apple Watch, and an upgrade to the phone’s LTE chip, ostensibly doubling download capabilities.

Force Touch, Apple’s newest cross-platform hardware feature, has already been seen in the Watch and more recently in the new Macbook’s trackpad. However, Force Touch in the Watch (the only other device so far that has used the feature directly on a screen) is a binary system, meaning that the input is only based on if pressure is applied—not where the user is pressing on the Watch.

However, the Watch’s screen itself is pressure sensitive, so if Apple can make specific locations on the screen react to force, they’re able to open an entire new world of context menus. Just think, instead of tapping and holding down on the screen for a few seconds to substitute a right-clink on text, you can Force Touch to select. Force Touch in the Macbook is also pressure sensitive, which if implemented in the iPhone could open up uses for things like more natural drawing; lines and brush strokes could vary in width based on pressure, but it could also mean more nuanced control for audio, video and peripherals like smart appliances. Some people are calling it a “game changer,” but we won’t know until it arrives.

Talking about the new Qualcomm LTE chip, the iPhone 6S will see a boost in max download speeds on LTE, up to 300 mbps from 150 mbps in the iPhone 6. While this could be sold as doubling download speeds, most carriers average up to 40 mbps for LTE. You can imagine this like a tube used to transport your data: Apple is making an already-large tube larger. It’ll be nice when you inevitably need it, but that probably won’t be for a few years.

The photos also shows a slimmer motherboard, notes 9to5Mac, which could make more room for a larger battery. It should also be noted that there were no photos of a larger-screened “6S Plus,” although that doesn’t mean such phones aren’t planned for release.