This Sea Cucumber Looks Like A Burnt Hot Dog, And It’s In Trouble

Anyone up for an underwater barbecue? 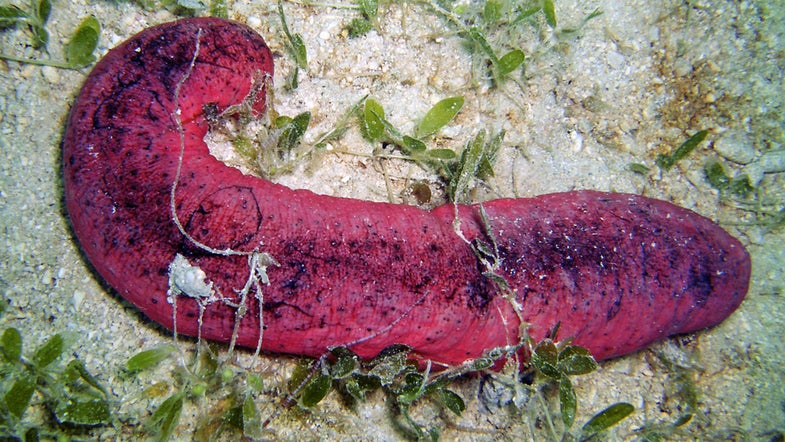 Sea cucumbers are never going to win any beauty contests. Unless it’s a sea cucumber beauty contest. But that’s unlikely to happen (if it does, please tell us about it).

Beauty aside, these squishy blob-like marine creatures are hugely important to marine ecosystems, running sand through their digestive systems and cleaning up the ocean floor. But these valuable creatures may be in danger of being wiped out.

In a study published in Conservation Genetics, researchers looked into the genetic diversity of five populations of Holothuria edulis, better known as the ‘burnt hot dog’ sea cucumber, for reasons that are immediately obvious if you look at the image above. The species has a large range along the coasts of the Western Pacific and Indian Oceans.

“It’s easy to underestimate the sea cucumber,” said Iria Fernandez-Silva, co-author of the study. “Sea cucumbers look goofy, move slowly, and barf up their guts when startled, but these invertebrates are superstar ocean cleaners that are hugely important to marine ecosystems. Our study looks into the genetics behind the economically-important species Holothuria edulis so we can understand the pressures they face and help protect threatened sea cucumbers globally.”

In addition to dealing with degraded habitats, species like Holothuria edulis are increasingly being fished, harvested for food or use in traditional medicine. Researchers hope that by showing the difference in genetic diversity between the populations, and reminding people of the important role that these animals play in the ocean ecosystem, people will be able to take action to protect them. Even if they do look like burnt hot dogs.