Amid hazardous levels of air pollution 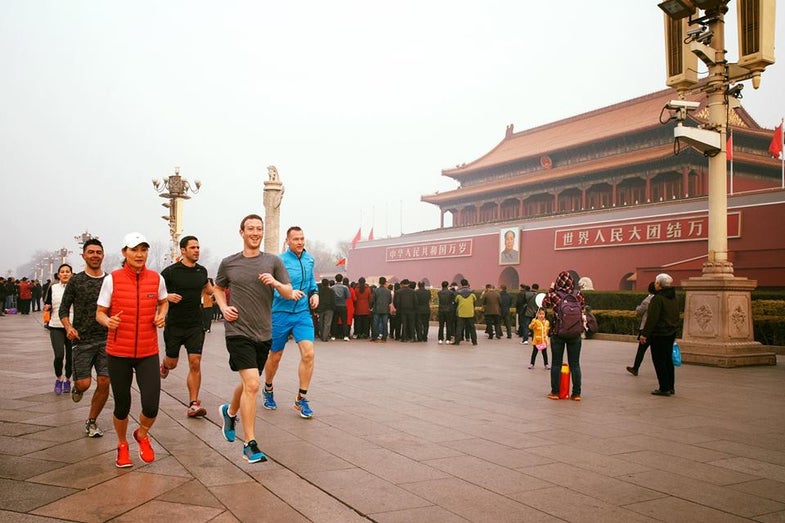 Co-founder and CEO of Facebook Mark Zuckerberg, took a morning run through the streets of Beijing during high air pollution levels that are hazardous to human health. Facebook/Mark Zuckerberg
SHARE

There’s nothing better than an early-morning run to scrape the cobwebs off and inject a bit of energy into your day. Although it might seem counter-intuitive, running is a great remedy for fighting jet lag and forcibly adjusting yourself to a new schedule. The cool, crisp, dewy air filling your lungs and the oxygen-filled blood pumping throughout your body provide a fast track to rejuvenation. And what better place is there on this Earth to take that refreshing dawn jog than the hazy, notoriously smog-choked streets of Beijing? Cue Mark Zuckerberg, co-founder and CEO of Facebook, who took a jaunt Friday morning in the Chinese capital with no mask, when pollutants in the air were at hazardous levels.

In a post on his Facebook wall, Zuckerberg pasted an image of himself and friends, all smiles, jogging through Tiananmen Square with Mao Zedong’s portrait on the gates of the Forbidden City in the background, obscured by the gray white haze of smog. He wrote, “It’s great to be back in Beijing! I kicked off my visit with a run through Tiananmen Square, past the Forbidden City and over to the Temple of Heaven.” The New York Times surmised that Zuckerberg must be using a virtual private network to access Facebook, which is banned in China and blocked by the so called “Great Firewall,” a network of government Internet filters.

At 9am Friday morning, when Zuckerberg was happily exercising around Beijing’s historic landmarks, the U.S. Embassy Real Time Air Quality Index (AQI) measured the ultra fine particles that cause the most severe respiration problems—known as PM2.5—at 305 micrograms per cubic meter. According to the Environmental Protection Agency, anything over 301 is deemed hazardous to human health—the highest possible risk on the AQI scale. During such conditions, they advise that “Everyone should avoid all physical activity outdoors.” Late Friday morning, the AQI tipped 400.

Air pollution in China, caused mostly by industrial activities such as burning coal, is attributed to 1.6 million deaths a year in the country.

There was no shortage of mockery on social media following his post, but equally prevalent were shocked comments from people scratching their heads as to why the Facebook CEO would do something so obviously damaging to his health.

One Facebook user by the name of Shuo Wang, wrote:

But the mockery also continued to flow. One enterprising user, by the name of Cindy Acevedo, riffed on the Dick and Jane children’s books, writing:

Zuckerberg has been very clear about his efforts at trying to get the Chinese government to allow Facebook in its country, and has even started learning Mandarin; supposedly speaking it often on his most recent trips to China. And while his perseverance can be commended, putting himself through the physical hell of asphyxiating runs in one of the most polluted cities in the world is probably a bit much. Take care of yourself, Zuck.