The $3,000 headset will be sent to developers first, with AR apps in tow

Everything that comes with the $3,000 HoloLens kit shipping to developers on March 30, 2016. Microsoft
SHARE

Much of the early tech news this year has focused on the coming wave of high-end virtual reality headsets. But Microsoft is exploring another type of technology with its experimental HoloLens headset.

Today, Microsoft announced that the first versions of the HoloLens, dubbed the “HoloLens Development Edition,” will begin shipping to independent software developers on March 30th, 2016. The devices cost a whopping $3,000 per unit for now, and you need to apply on Microsoft’s website, fill out a form, and be approved by the company, in order to get one.

There’s no sense yet on when HoloLens will be available for purchase by the wider public, without these restrictions, but Microsoft technical fellow Alex Kipman calls this release “the first step in our journey to consumers.”

Unlike the VR headsets also coming out this year, the HoloLens is self-contained and does not require a separate computer in order to work. That’s partly how Microsoft was able to send some of the earliest models to astronauts aboard the International Space Station. However, if you want to write apps and software for it, you will need a Windows 10 PC capable of running Visual Studio 2015 and Unity 5.4, according to Microsoft. 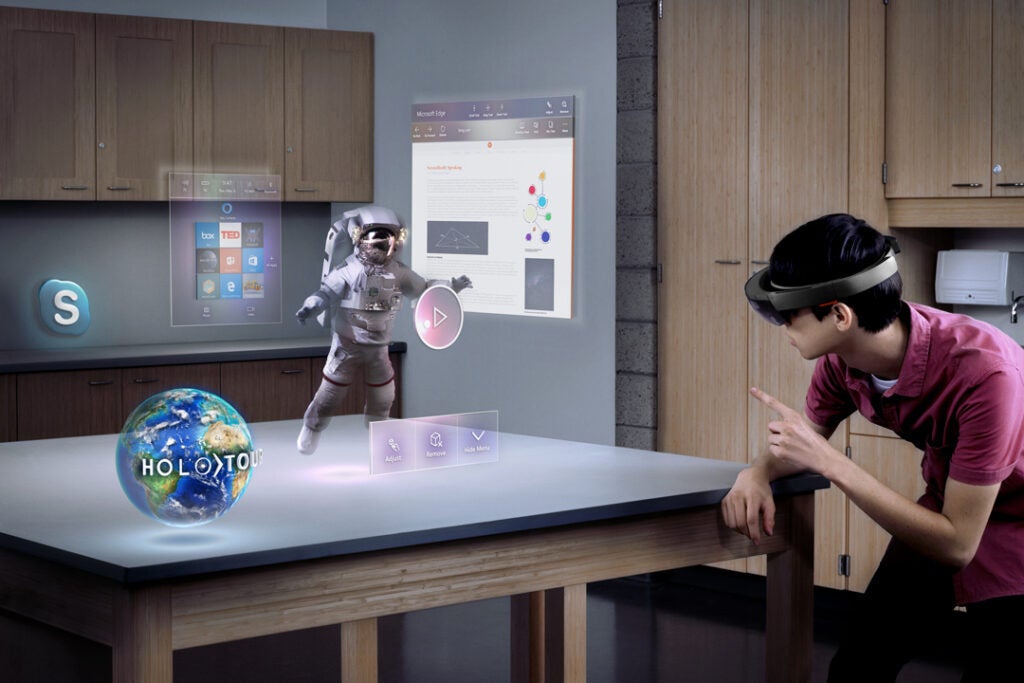 What Microsoft imagines you’ll do with the HoloLens

HoloLens uses augmented reality (AR), a type of technology that basically means layering digital pictures and information over your view of the real world (for example, the moving yellow first down line in NFL games can be thought of as a simplistic version of augmented reality).

Microsoft’s HoloLens, first shown off last year, aims to let you see much more than that: the headset displays fully realized 3D “holograms” of fictional characters, objects, models, charts, even games like Minecraft. These digital forms appear right in front of you, on your real-life desk or table or whatever room you’re in, while you’re wearing the HoloLens headset.

The distinction between augmented reality and virtual reality, which immerses you in a fully digital experience without giving you a view of the real world, is a subtle but important one. Whereas virtual reality closes you off from the outside world, augmented reality lets you see it, plus additional information (hence the “augmentation” of the name). Facebook is betting big on VR through its subsidiary Oculus VR, but right now, Microsoft is looking more to AR as the future of computing.

The $3,000 HoloLens Development Edition comes with several AR games and apps, some familiar and some completely new to the technological platform, including Skype, a video game called Young Conker (of Conker’s Bad Fur Day fame), another game called RoboRaid (robots that invade your room, previously shown off at Microsoft’s event last year), a new “crime drama” game called Fragments, the HoloStudio (which lets you create and view 3D holograms), and the Actiongram (which lets you “blend holographic content into real-world settings”).

Interestingly, the Dev Edition doesn’t ship with Minecraft. Microsoft purchased the hit block-based building game for $2.5 billion in 2014, and previously showed off AR versions of Minecraft for HoloLens in several demos. Hopefully it will be coming to the platform sooner rather than later.