Mega upgrades in the works for Megabot 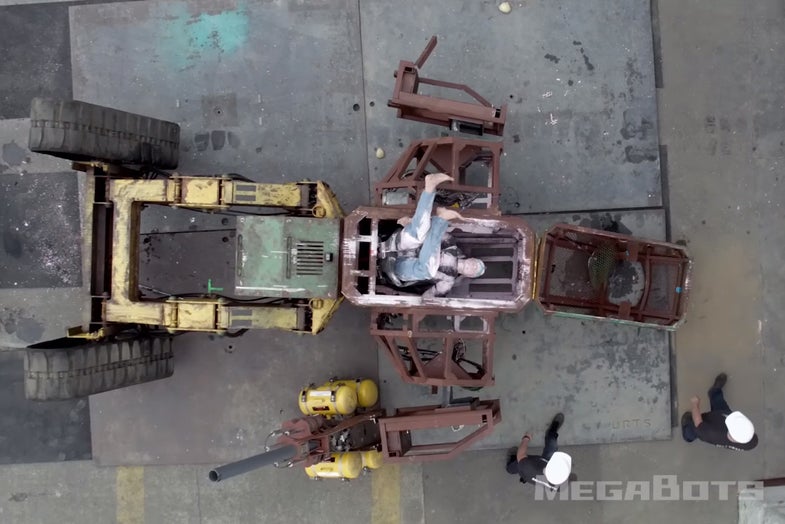 When robots fight, the least safe place to be is inside of one. When it comes to military tech, one major advantage of robots is the distance they put between their pilots and battle. When it comes to giant robot duels for sport, instead, the whole point is to make the machine a fancy, battle-ready exoskeleton for the human inside. To do that, the human needs to survive the fight.

So MegaBots, the American team that built a giant human-carrying fighting robot and immediately challenged a Japanese robot to a fight, are working on making their machine safe for the human inside when the duel finally happens.

That means outfitting a dummy with accelerometers, putting it in the pilot seat, and then shooting it. With a paintball cannon:

The impact, as calculated by the Head Injury Criterion, would result in instant death–which probably means there’s plans to redesign the cockpit so that minor things like sudden traumatic pilot death won’t happen.

The opponent robot, Japan’s Kuratas, has a punching arm, so another attack Megabot will have to withstand a high-powered punch. To simulate that, the team first used a crane wrecking ball, which wobbled but couldn’t topple the ‘bot, even when it was balanced facing uphill on a slope. So they managed to knock it over another way.

The cockpit flops open, and while the dummy pilot remains strapped into its seat, its legs emerge mangled. The odds of a human inside surviving this robot duel are, at best, slim, but that’s why testing is done first. In the next installment of their fight preparation series, we’ll probably see a wealth of safety features.

Watch the damage tests below: