‘Stranger Things,’ Parallel Universes, And The State Of String Theory 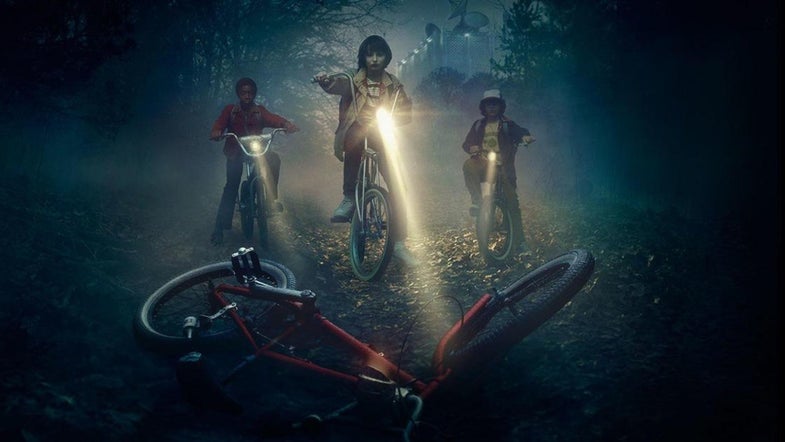 Undoubtedly a hit of the summer, Netflix’s Stranger Things is a Sci-Fi horror series that utilizes some serious scientific theories. Although they may use some terminology interchangeably, the series dives into some intense, confusing topics in theoretical physics and astrophysics.

Trying to figure out the science behind this piece of science fiction, Popular Science had the opportunity to speak with theoretical physicist Brian Greene, professor of physics and mathematics at Columbia University. Though he’s skeptical of the idea of parallel universes and accessing alternate dimensions, he’s open and willing to explore the possibility of them. Here’s our conversation with him:

In Stranger Things, they use the terminology parallel universes and alternate dimensions, interchangeably. Are these the same? And if not, what’s the difference?

No, I mean, they’re not really the same. They’re related, but you can have a single universe that has more dimensions than the ones that we’re aware of. There’s reason to think that there might be more dimensions of space beyond our three that we don’t see.

Now, you can also have universes, you can also have multiverse proposals — that is, multiple universe proposals — where each universe only has three dimensions of space, and one of time. You can have many universes, each of which has the same number of dimensions that our naive perception suggests to exist: three space and one time. You can certainly put all those ideas together and have a many universe theory in which you also have extra dimensions of space, so they’re not mutually exclusive.

So, with that in mind then, the teacher in the show uses an analogy to describe this alternate dimension, saying that we are like acrobats walking on a tightrope, and the dimensions that we can access are only going forwards and backwards. But there’s also a flea on the tightrope that can also go underneath the rope, is this a good analogy for how an alternate dimension would hypothetically work?

Well, you’re asking someone who’s biased in that, because if you look in “The Fabric of the Cosmos,” you’ll actually see a picture of a tightrope walker on that very tightrope that you’re describing, and you’ll see that there’s like a little flea that he’s trying to avoid as he walks. So, yeah, it’s a good analogy. 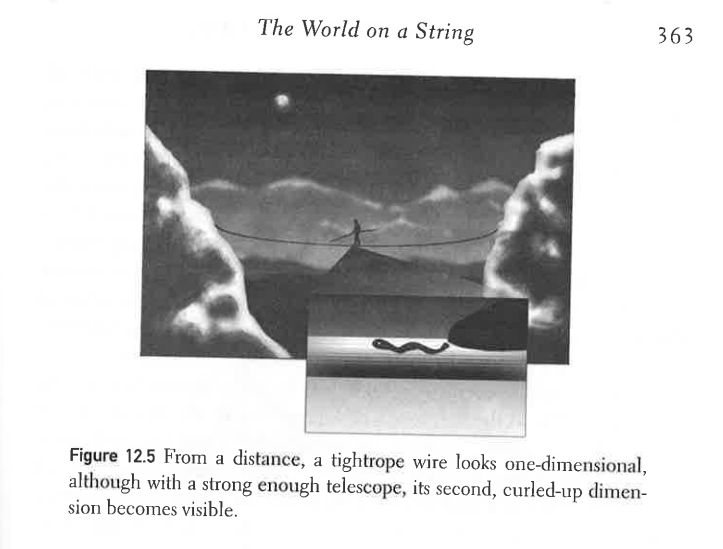 Greene uses a similar metaphor for accessing alternate dimensions, employing a worm rather than a flea.

Well, maybe that’s where they got it then! So, from that analogy, the teacher goes on to explain that for us to be able to access what that flea can access, we would have to be a massive amount of energy to rip open the spacetime continuum. Is this true?

In order to have access to tiny dimensions, you do need a lot of energy. The more energy you have, the smaller the entity that you can observe. And that’s why we build machines like the Large Hadron Collider, to take a lot of energy to concentrate into a small area and, within that small area, we can be able to probe the universe on fantastically small distance scales.

It strikes me that, you know, whoever’s writing this show is well-versed in some of the popular descriptions of these ideas, whether it’s mine or not, it doesn’t really matter.

But, you know, if you wanted to know what was inside of a peach, and you were firing little projectiles at the peach, clearly, if the projectiles don’t have a lot of energy, you’re just going to kind of be able to access the squishy, meaty part of the fruit. If you have a projectile with a lot of energy, it’s going to probe right down to the pit and you’ll begin to actually see the inner structure of the piece of fruit. It’s the same with the universe; the more energy, the more deeply you can probe, the more access you have to the fine structure of how matter’s put together.

Got it. This gets more into the Branes Universe theory, I think, where you’d have to have two universes in some sort of close contact, or proximity to each other to be able to access the other one. So, can these three branes intersect and overlap? Or are they definitively — as you described in “The Hidden Reality” — “slices of bread” that are stacked on top of each other?

So one configuration is the loaf of bread description, but no, these objects and principles can overlap, they can intersect and we’ve worked out all sorts of mathematical and physical implications of what would happen if they did overlap. In fact, some of the most refined versions of these ideas imagine that there are branes of yet more dimensions, not three, but higher dimensional branes that overlap in a three dimensional subspace, and that overlap region might in fact be what we experience as reality. So our three dimensional reality might arise from higher dimensional branes intersecting in the manner that you’re questioning.

Some also believe that there are many realities that all happen You call it the quantum multiverse, and it’s commonly called the many-worlds interpretation as well. So, where exactly are these universes?

But most of us don’t think in terms of Hilbert Space, we want to say, “well, where is it? Point to those other worlds,” and that’s challenging because the other worlds of quantum mechanics would not reside in our space as we normally think about it. They would be another world, another version of this place, that would not overlap with it in any spatiotemporal sense. It’s not as though there’s a higher dimensional geometry within which all of the quantum worlds exist. Instead, each of these worlds is a mathematical entity that lives in a more abstract mathematical state, and we’re all inhabitants of that more abstract mathematical space.

Got it. Now a bit about our more concrete universe. In your latest book, you talk about six different experiments and observations that you say have the capacity to link string theory to data, one of them being gravitational waves. Earlier this year, news broke that we had finally detected these of gravitational waves, so what does that mean for all of these multiverse theories? What kind of experiments are now possible?

The discovery of gravitational waves confirms that we, in principle, can use ripples in the fabrics of space as a diagnostic tool for probing exotic theories. And one possible approach that’s relevant to string theory, which is the one that I describe in the book, is that if string theory’s correct, then it’s conceivable that a little string of string theory would be stretched as the universe expands. It would be out there in space, wildly vibrating, you know, maybe one lone string in our observable universe. And much as a, you know, circus, stars whip when that string-like entity wildly oscillates, it sends out a crack, a sound, the wild strings of string theory — they would send out another kind of crackling sound, but it wouldn’t be auditory sound, it would be gravitational wave sounds, it’d be ripples in the fabric of space.

People have calculated the kinds of wave shapes that you’d expect to receive if there is a string out there wildly vibrating. And it’s different from the wave shapes that you get from black holes colliding, what they found in September. So people are naturally going to be looking for those wave shapes, and if they’re found that would be a big deal.

Do you think that they’re on their way to finding those shapes?

Well, I believe that they’re on their way to either finding them or excluding them. Obviously, we can’t predict the results of experiments and observations that haven’t yet been undertaken, but we do know that the degree of sensitivity of the detectors is getting to the point where they should see these ripples if they’re out there. And if they don’t see them, it will mean that they’re not out there.

Where did you see the experiments going when you were writing your last book, and how have they actually turned out?

What we would’ve hoped would’ve next happened would have been the discovery of some the more exotic particles relevant to string theory. And, you know, as of three weeks ago, the rumor was that such particles had been found. But the beauty of science is it’s incredibly rigorous and self correcting, and the experimenters who were part of those early rumors were highly cautionary, saying the data is not yet strong enough for us to claim discovery. And, indeed, as they looked more closely at the data, the bumps that that particle was associated with had evaporated into more refined data, and that’s the nature of exploration. So we’ll keep going and, who knows, maybe a new particle will turn up in the next few months, next years, but, obviously, who can say?

This interview has been edited and condensed for length. We have reached out to Netflix for comment on the acrobat metaphor and will update if we receive one.