How To Build A Better World Cup Ball

You want it to fly, not break 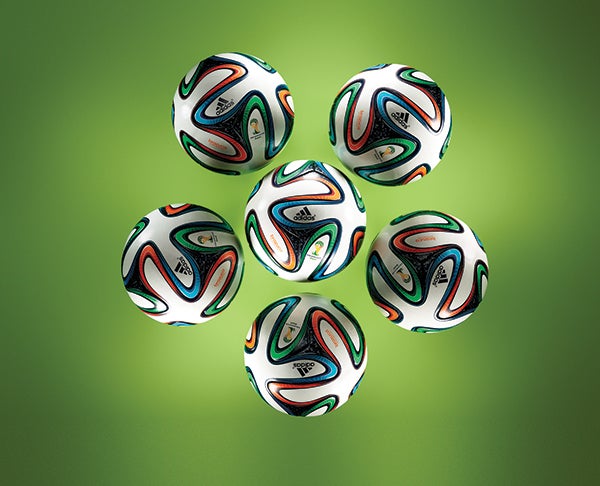 At the 2010 World Cup, Adidas debuted the Jabulani, the tournament’s official game ball. It flopped. Players lamented its tendency to break unpredictably in the air—a consequence of its smooth stitching (see “The Physics of Flying Objects,” below). With this summer’s Cup to prepare for, Adidas didn’t want to repeat its mistake. The company tested the new Brazuca with more than 600 players over the course of three years. Although the ball has fewer panels than its predecessor—six versus eight—its seams are three times deeper, giving it less drag, which helps ensure it’ll fly where a player wants.

The Physics Of Flying Objects

The amount of drag an object experiences determines how it will fly through the air; the less outside forces it interacts with, the truer it will fly. As air passes over a smooth sphere, like the Jabulani, it breaks away from the surface, cutting a wide path that’s susceptible to forces such as wind. A more-textured sphere, like the Brazuca, holds airflow close to the object, creating a narrower path that’s harder to disrupt.

One of the Brazuca testers was U.S. Men’s National Team defender Omar Gonzalez. As a defender, Gonzalez sends plenty of long passes up the field. Here, he explains how to do so successfully:

“I make eye contact with a teammate to make sure he’s on the same page as I am. When he’s getting ready to take off, I know I have to lead him with a long pass.”

“Try to have more technique rather than hitting the heck out of the ball. Plant your nonkicking foot next to the ball, and strike the ball below the middle so you can get some flight on it.”

“You want to have a nice, easy swing to make contact with the ball. I try to follow through in the direction I’m trying to hit the ball. When I do that, I know it will be getting to my teammate.”