I’m a fan of endeavours that bring science to the general public in a fun and accessible way, like the...

I’m a fan of endeavours that bring science to the general public in a fun and accessible way, like the DIY Science Zone at this year’s GeekGirlCon or anything Neil DeGrasse Tyson does, ever. That also includes citizen science, in which the general public can actually participate in experiments, like identifying celestial objects over at Galaxy Zoo.

The latest citizen science initiative is the product of a collaboration between Professor Kevin Dutton at the University of Oxford and Channel 4, the UK television network that will be airing “Psychopath Night” this Saturday. Psychopath Night will feature fun for the whole family, including the British Comedy Awards at 9pm and Keeping up with the Kardashians at 8pm. It’s possible I’ve misread their episode guide, but it sounds right. 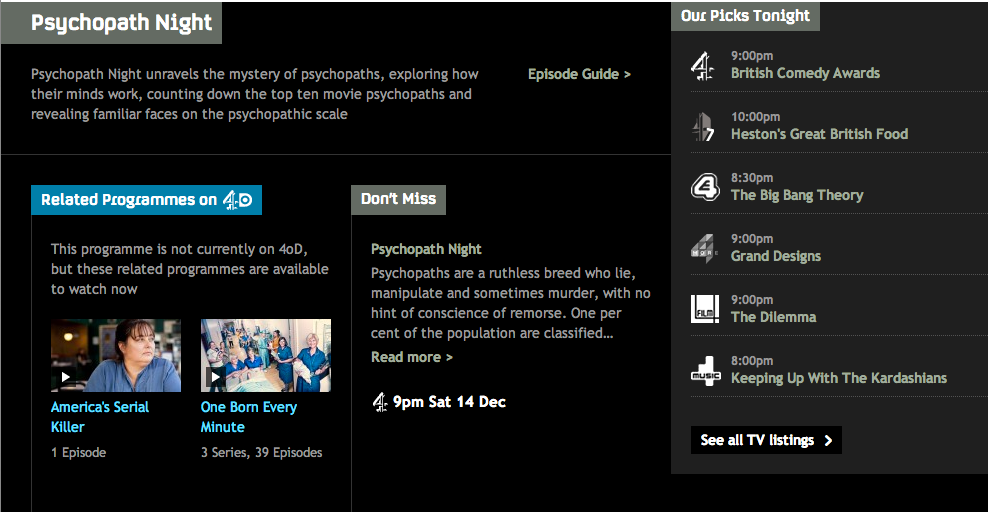 To promote the special evening, Channel 4 teamed up with Professor Dutton to let viewers take a Psychopathy Test, which we’re told will be used to create “the biggest ever survey of psychopathy in the UK.” Test-takers are asked to rate a variety of statements based upon how much they agree or disagree with them. The statements include, “You rarely catch me making any plans, I’m far too spontaneous,” and “I don’t get bothered by seeing animals injured or in pain,” and “If someone gets conned who cares? They’re asking for it.”

After rating eleven statements, you give the survey your gender, age, occupation, and income, then choose your favorite news source, animal, and music. Finally, you get to see how much of a psychopath you are, along with some stats for other people who have taken the test. My first try looked like this:

That is, by far, the most flattering description of a psychopath I have ever seen. I assume that this description was chosen instead of “Dear lord, you’re a murderous mistake of nature!” in order to avoid angering the psychopath, who would then possibly hunt down Channel 4 executives and torture them to death (note to Channel 4 executives: contact me immediately to greenlight this hot new miniseries idea).

In defense of my obviously fallacious survey answers, I had no idea until the end that this was an actual scientific survey – I was only trying to beat my friend Tracy King’s score of 91%. Judging by the results, I wasn’t the only one who thought the survey was a joke. The results page showed that the most psychopathic respondents preferred to read the Financial Times and their favorite animal was the piranha. Had the survey asked, I’m sure we’d also discover that their favorite tool is a bloody axe and their favorite activity is staring at you while you sleep. Seriously: no one’s favorite animal is the piranha. Ichthyologists who dedicate their lives to specializing in Amazonian chordates don’t think of the piranha as their favorite animal. The piranha may be the favorite animal of many 11-year olds but this only lasts until they start researching them and realize that their awesome reputation is greatly exaggerated.

Over on Twitter, I asked Professor Dutton how he planned to sort out the joke responses from the real ones. He replied, “Data will b part of a UK psychopathy survey, Rebecca. Can’t go into details re: filtering. But we DO have our fiendish ways!”

In retrospect, it makes sense that he wouldn’t tell me. After all, once I knew, I could possibly find a workaround to destroy his study. Immediately after I had that thought, I wondered if having that thought would increase my psychopathy score.

There are ways to combat lying on self-report surveys, and some of them are really quite clever. For instance, hooking people up to something they think is a lie detector helps, as does asking people to flip a coin or roll a die to determine whether they lie or tell the truth to the surveyer.

Those things help when people are lying out of embarassment, but not when they’re lying just to have fun. To guard against those people, some surveys include questions that no one would reasonably answer in a certain way, safely figuring they can discard any survey that answers it incorrectly. “I don’t get bothered by seeing animals injured or in pain” may be one of those, or perhaps Dutton will throw out any survey with a perfect 100%. But would a psychopath be exactly the sort of person to want to answer “strongly agree” to all those questions (my vocal critics will say “yes”)? Would a psychopath lie on all of them to see how low they can get their score and hide their “psychopathy”?

Those are exactly the problems psychologists seem to have with diagnosing and treating psychopaths. My friend Jon Ronson wrote an entire book on the problem, called (appropriately) The Psychopath Test, and he gave a TED talk on the topic that you can watch here.

I’ll be interested in seeing the results of Dutton’s survey when he publishes, and I’ll be particularly interested in seeing what the media does with those results: “Next on Channel 4: a documentary exposing the surprising number of game wardens who don’t mind seeing animals in pain.”