What does that cute baby video actually show?

“Mommy’s going to sing you a song; let me know how you feel about the song, OK?” says a voice... 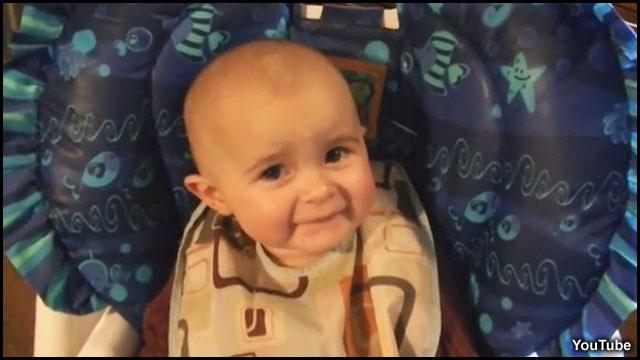 “Mommy’s going to sing you a song; let me know how you feel about the song, OK?”

says a voice behind the camera as the video starts. By now, more than 23 million people have watched the YouTube video of Marie-Lynne Leroux, a 10-month-old from Ontario, Canada.

The video appears to show a baby experiencing a rainbow of emotions, laughing, then weeping while smiling as her mother sings Rod Stewart’s single ‘My Heart Can’t Tell You No’.

According to the mother, the little girl has been reacting strongly to her mother’s singing since she was about 8 months old – smiling at happy songs and crying during sad songs.

“No one can explain why, not even I,” the girl’s mother told Storyful. “I can sing any other song and do not get the same reaction from her. It’s (too) adorable to keep all to ourselves.”

But KinderLab asked some experts if the video actually shows empathy, or something else – and found that the responses were varied.

“I imagine that the video of the baby’s response to her mother’s singing is popular because it appears to show a sweet sentimentality at 10 months of age,” says Susan Jones, a professor of psychology at Indiana University who studies infant communication. “However, the baby’s facial expressions are more consistent with a conflict between sociality and fear – perhaps a positive social response to her mother’s face, and fear in response to her mother’s low and loud singing voice, which is not like her speaking voice. Babies at this age often react negatively to unfamiliar things, including new people, and familiar people with something out of whack (e.g., wearing a hat).”

Jones says that a specific interpretation on her part isn’t possible without knowing more about the situation, but she says she is “disturbed by the video and pretty sure the baby is not happy and is not a little romantic who loves sad songs.”

People watching the clip often bring up the idea of empathy evolving in the infant. In June, a paper in the journal PLoS One showed that 10-month-old babies, when watching an interaction between an aggressor and a victim, showed preference for the victim. “This simple preference may function as a foundation for full-fledged sympathetic behavior later on,” the authors write.

Jones says that it’s difficult to interpret babies’ responses in studies such as these. In the study, 10-month-olds watched a yellow cube chased a blue sphere (or vice versa), caught up with it and beat it up. Then, given a choice between the aggressive chaser object and the victim chased object, the babies reached more often for the victim.

“This choice behavior is the only basis for the authors’ claim that the babies were showing sympathy for the victim,” she says. “But the social roles in this experiment were not the only thing and possibly not the most important thing that was different about the two objects. Another big difference is that one object – the one that adults see as the victim – underwent interesting transformations in shape while the aggressor object did not,” she says, adding that the change could explain the babies’ increased interest in the victim object. “The authors’ inference that their choice represents an understanding of aggressive interactions and empathic appreciation of the feelings of a victim, when hopefully the infants have not experienced anything like that themselves, is a very strong interpretation of the data, in my view,” says Jones.

This brings up a problem in much of child development research (and many awesome baby videos) – people interpreting baby’s behavior as parallel to adult behavior, says Jones.

Other experts contacted by KinderLab say the video could show empathy.

“It looks like empathy for what the mother is feeling as she is singing,” says Darcia Narvaez, a psychologist at the University of Notre Dame. “And it looks like she smiles at the baby every now and then (and the baby smiles back). Prior research by Martin Hoffman has shown that newborns will empathize with other newborns by crying when they cry, so this is one of the early stages of empathy development.

I have never seen such an extreme example of it though, with the shifting mirrored emotions based on the mother facial expressions, frowns and smiles, apparently.”