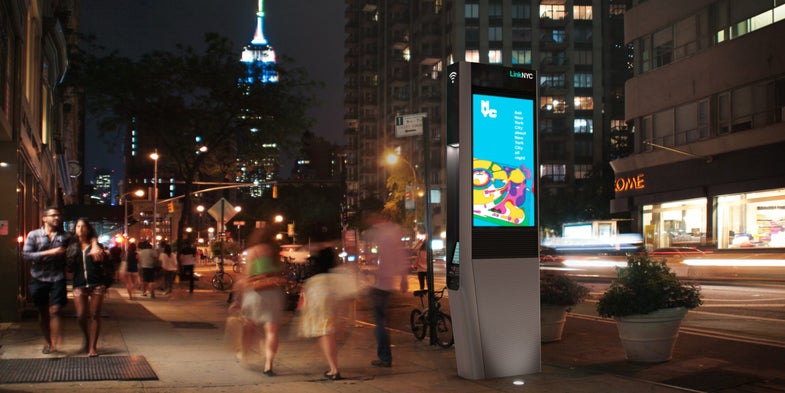 The temperature hovered around freezing in New York City on Tuesday evening and my exposed hands were started to go numb, turning clumsy and slow in the cold. My phone’s battery was sluggish in the frigid air, and the screen was lagging. My internet connection, however, was flying.

Yesterday, LinkNYC blessed the streets of Manhattan with free public Wi-Fi, opening four hotspots on Third Avenue. The Wi-Fi kiosks are replacing public pay phones, and according to Link’s website, the company plans to install more than 7,500 hotspots throughout the city over the next few years.

To connect to Link’s public network, I just had to turn on my phone’s Wi-Fi and enter an email address when prompted. The website offers a vague promise of Wi-Fi “up to 100 times faster than average public Wi-Fi and your mobile device’s LTE network.”

My Speedtest on a Samsung Galaxy S5 showed upload speeds of about 115 Mbps and download speeds of 59 Mbps. That means that when I opened up Netflix and hit “resume play,” Don Draper immediately started striding through his office in crisp HD, without so much as a second of buffer time.

Link’s Wi-Fi was certainly faster than what I have at work (upload speed of 33 Mbps and download speed of 45 Mbps according to a Speedtest on a Samsung Galaxy S5), but others trying Link throughout the day reported even faster speeds than what I experienced:

Using Link Wi-Fi on an iPhone and an Asus Memo Pad tablet resulted in similar speeds. Vimeo and Flickr loaded full pages of high-res visuals in seconds. I called my mom to test the Wi-Fi call quality and it passed with flying colors. She called it “close to as good as the old landline quality.”

Of course, I was also the only person in sight using Link Wi-Fi, and connection speeds could slow a bit if the network becomes more heavily populated. The kiosks also feature USB charging outlets, a 911 call button, and allegedly, a touch screen tablet for internet browsing, although the one I tried didn’t respond to repeated touches.

If the Wi-Fi doesn’t turn impossibly sluggish when many people use it at once, and if Link’s network covers the entire city eventually, it could have big implications on life in Manhattan. It would mean that most people would have access to faster Wi-Fi outside in the city than in their own apartments. Movie pausing to buffer too often? Skype call quality not top notch? Relocate outside.

The security of fast, free internet everywhere in the city could even lead to some people to abandoning mobile data plans all together and relying purely on Wi-Fi. Plus, making Wi-Fi enabled tablets widely available in the city means that more people than ever will have easy access to all the information and resources available online.

But for now, the public Wi-Fi remains contained to four kiosks on Third Avenue, plus the neighboring establishments close enough to mooch.

When I retreated to the Duane Reade across the street to thaw out, the Wi-Fi didn’t even stutter. Don Draper was right where I left him.