Engineers Use Origami To Inspire Creativity 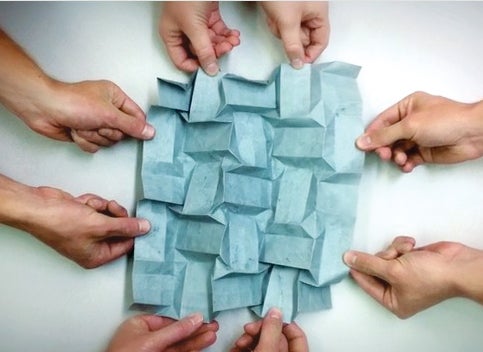 A lab demonstrates the use of origami as a design tool for engineers in this video. Larry Howell, Julie Walker, Robert Lang, Spencer Magleby, and Brian Wilcox
SHARE

Hundreds of years ago, a marvel of modern engineering was born: origami, flat sheets of paper folded into lifelike forms. Today, mechanical engineers build on origami principles to make prototype machines that collapse, flex, or unfurl. With origami underpinning their core, spacecraft will harbor compact solar panels that expand dramatically after launch, and micro-scale instruments will unfold inside the body to perform delicate, minimally invasive surgery. A mechanical engineering lab at Brigham Young University, led by Larry Howell and Spencer Magleby, has been using origami as design inspiration for the better part of a decade. They created this video to trace the art form’s modern resurgence and share its wide application in engineering today.

Howell says the origami work is the most fun he’s had in more than 20 years as an engineer. “The motions are so dramatic, it’s so visual, and there’s so much potential for applications. These things can really go out and make a difference.”

“How Origami Is Inspiring Scientific Creativity” won the People’s Choice award for Video at the 2015 Vizzies. See all 10 of the winners here.