The Hubble Heritage Team captured the warped structure of spiral galaxy ESO 510-13 so beautifully in this pretty space pic.... 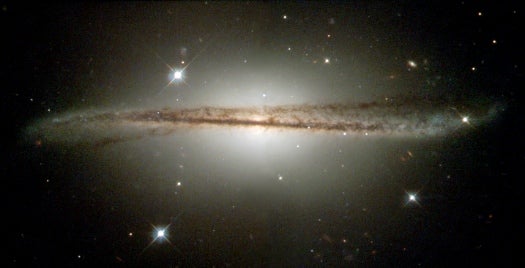 The Hubble Heritage Team captured the warped structure of spiral galaxy ESO 510-13 so beautifully in this pretty space pic. Behold, the product of galactic collisions.

At least, that’s one theory. Most spiral galaxies are flat disks made up of millions of stars and gas and planets and whatnot orbiting a galactic center (which is thought to be, at least in the case of large galaxies, a supermassive black hole). These disks are thought to flatten out the way they do by the nature of the collision of gas clouds early in a galaxy’s lifespan.

But aberrations occur. Even our own Milky Way may have a small warp in it. In the case of ESO 510-13, that warping is pronounced. Some astronomers theorize that the warped nature of some galaxies is the product of gravitational interactions between galaxies or perhaps even by collisions between them. We’re not really sure how ESO 510-13 got so bent out of shape, but it even at 150 million light years away it makes for an interesting profile.