Reconnaissance Orbiter Captures a Twister on the Martian Plains

Pictured: a Martian dust devil twisting across the Martian Amazonis Planitia region. The 100-foot-wide column of swirling air was captured... 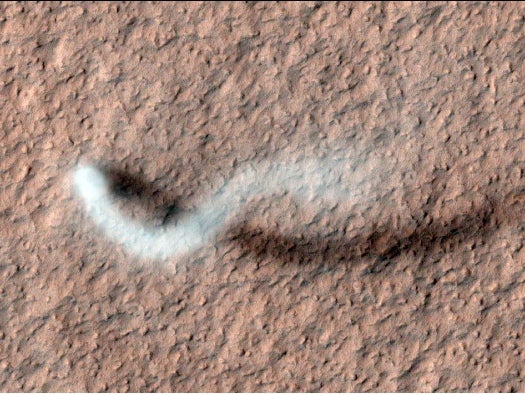 Pictured: a Martian dust devil twisting across the Martian Amazonis Planitia region. The 100-foot-wide column of swirling air was captured by the Mars Reconnaissance Orbiter last month as it passed over the northern hemisphere of Mars.

Unlike an actual tornado, dust devils–which also occur on Earth–are generally spawned on clear days when warm air along the ground begins to spiral as it moves through cooler air above it. They are visible because of the dirt they kick up (hence the name), and against the monotone background Martian soil this massive devil sticks out. It may look tiny in the pic above, but the column towers half a mile high.

Just another day at the office for the NASA’s Mars orbiter, which has been in service since 2006. Fun fact: though it is the youngest Mars orbiter flight to date, SPACE reports that it has delivered more data back home to Earth than all other interplanetary missions combined. When you’re recording that much imagery, you’re bound to get an amazing shot like this one every once in a while.