Video: Meet Piccolo, the Pocket-Sized CNC-Robot That Draws What You Design 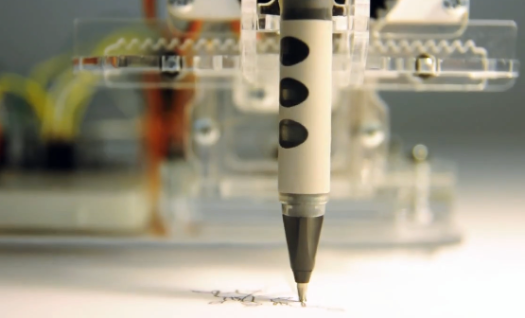 It’s no secret that PopSci loves robots, but even we think they have some shortcomings–mainly that there aren’t more of them everywhere doing everything, from the very big to the very small. Plus, robots are expensive and often complicated. But not Piccolo. This pocket-sized CNC platform from London shop Diatom Studio turns your ideas into high-quality doodlings for less than $70.

Right now the Piccolo is still in prototype stage, but soon enough the Arduino-compatible platform will allow those of us with the least artistic acumen to turn our visions into beautiful back-of-the-envelope schematics and cocktail-napkin diagrams. Says Piccolo’s Web site:

Piccolo is a pocket-sized stand-alone CNC platform. For under $70, you will be able to assemble your personal Arduino-compatible kit for tinkering, and playing with basic CNC output. Be it plotting a quick graffiti, printing a one-off business card on the fly, or multiple Piccolos working together to create a large mural, this kit provides a platform for experimenting with 2D or 3D digital fabrication at a small scale.

That’s pretty neat, even though its working space is a bit limited because of its small size. The finished product will include Arduino and Processing libraries so users can experiment with their Piccolos as well. Which means Piccolo isn’t just an inexpensive sketch-bot, but potentially a really interesting learning tool. More details and a demo in the video below.

Piccolo the tiny CNC-bot from diatom studio on Vimeo.