Beach Modernism with a Contemporary Twist 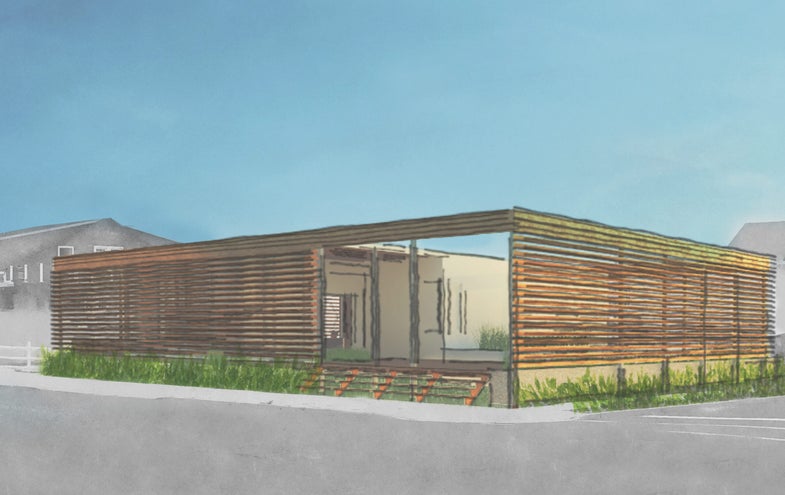 Flashback…1960s Seaside Park, NJ. You and your family are walking down your street toward the ocean, and eventually making your way towards the Seaside Heights Boardwalk. The neighborhood has a great deal of architectural integrity. Each house has its own story. From the articulated wooden boxes to the cedar shake beach bungalows, each iteration represents a kind of every man modernism that is accessible to people with middle class incomes.These small homes seem to have the perfect balance of house to landscape. Greeted by the ocean air at the end of the street, you walk along the beach and eventually make your way to the Boardwalk to enjoy the night with your family.

Let’s fast forward to 2015 Seaside Park and Seaside Heights, NJ…two towns devastated by the aftermath of Hurricane Sandy. Walk down these streets, they are far from that 1960s storybook atmosphere. The integrity of these neighborhoods are now dictated by vinyl siding, mini McMansions, and flood restrictions.

As our team studied the past and present of New Jersey coastal communities, we started asking oursleves how do we get that 1960s aesthetic, style of living, and synergy with the landscape back in contemporary architecture? How do we get our middle-class target market interested in these energy efficient beach bungalows again? We really wanted to understand this typology and the effect it could have on the lifestyle in a coastal community. As a team we realized, sometimes the only way to move forward is to look back.

After researching various 1960s beach homes, there were many that stood out with regards to the way they handled their spatial conditions. Steven Holl, Richard Meier, Charles Moore, and William Turnbull Jr. designed many precedents that we were able to specifically look into. Turnbull would become a strong inspiration moving into concept and design. He had a knack for exploring formal spatial properties, siting, landscape design, and the use of basic, unrefined building materials to fit his houses into their natural surroundings. Turnbull was a local Jersey Boy, so he understood and was able to draw inspiration from a Jersey vernacular vocabulary. He loved exploring the concept of a “House within a House” or a continuation of interior space to the exterior. A few of his homes in particular display these concepts.

Turnbull’s Budge House (1966) incorporates the kitchen and bedrooms as part of a screened enclosure while the living room corner becomes a permeable wall using its glazed walls and glass sliding doors that can open and close to maximize space in the summer. The building’s redwood plywood panels can be raised against the porch ceiling, like garage doors, opening the rooms to the outside.

The Spec House (1968) was Turnbull’s second attempt at designing a speculative development at Sea Ranch, California. The house featured exposed cross-bracing, douglas fir solid wood walls, plywood cabinetry, and sliding barn style windows and doors which all contribute to the home’s refined, rustic appeal. The living room positions the user in the intermediate zone between indoors and out creating a connection to hearth and shelter alongside the rugged beauty of the coastal landscape. The exterior is clad with natural redwood which diminishes the distinction between interior and exterior with its ability to weather and gray over time.

The Fall River Cabins in Glenburn, California continued the search for a universal beach home that began with the Sea Ranch Spec House II. Turnbull designed these homes to be flexible in terms of program, he was constrained by a strict budget that made economy essential. He continued to investigate the possibilities of single room living as he had done in the Budge House. Each home has large sliding doors that when rolled back open the indoors to the woods and meadows. At the opposite end are screen porches to encourage cross ventilation on hot summer days.

As seen in these three precedents, outdoor living areas are an important element of the architectural design, speaking to the importance of outdoor space in the lifestyle of the coastal communities. When it came to the SURE HOUSE, we realized these were important characteristics to integrate into a durable, energy efficient home. On top of that, we needed to keep our target audience in mind, a middle-class family of a coastal community.

As you can see, the Turnbull Beach Cabins and the SURE HOUSE have similar spatial characteristics. Openness. Flexibility. Integration of Nature. By creating a large coupled space around three distinct modules (wet, living, and entertainment), we are able to maximize our open floor plan’s relationship with the exterior. Granted, these studies only explore spatial organization and the overall parti as a diagram, but they are great foundations for our team to build upon while exploring ways to incorporate the material properties of this type of architecture into contemporary building strategies.

Our answer to the question of how to get that 1960s aesthetic, style of living, and synergy with the landscape back in contemporary architecture is straightforward: integrate outdoor space with a simple, contemporary interior that relies on ample natural daylight and functional, flexible living space to create a warm and inviting family home.

Yeah, we’re pretty SURE we can get on board with that.