This Month, James Cameron Will Dive to the Deepest Point on Earth in a Custom-Built Sub

An expedition to the deepest place on this planet is set for later this month, in a custom-built one-man sub... 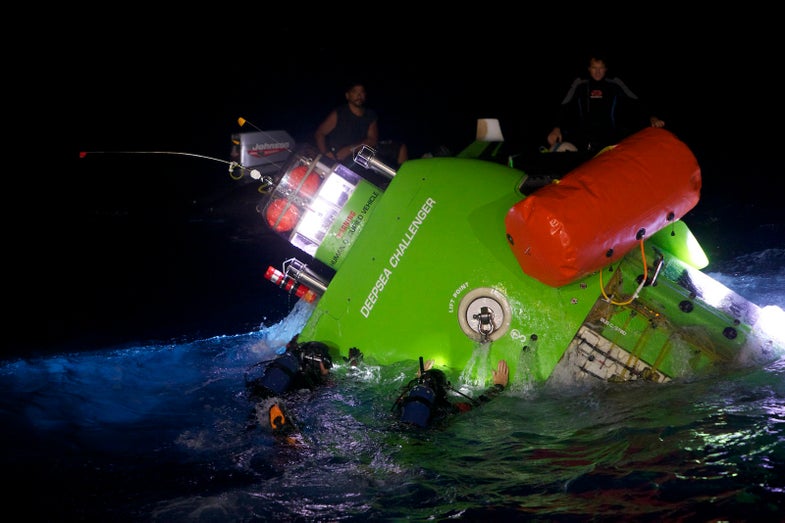 PERMITTED USE: This image may be downloaded or is otherwise provided at no charge for one-time use for coverage or promotion of DEEPSEA CHALLENGE dated 2012 and exclusively in conjunction thereof. Copying, distribution, archiving, sublicensing, sale, or resale of the image is prohibited. REQUIRED CREDIT AND CAPTION: Any and all image uses must (1) bear the copyright notice, (2) be properly credited to the relevant photographer, as shown in this metadata, and (3) be accompanied by a caption which makes reference to the DEEPSEA CHALLENGE. DEFAULT: Failure to comply with the prohibitions and requirements set forth above will obligate the individual or entity receiving this image to pay a fee determined by National Geographic.10: Photo by Mark Thiessen/National Geographic Crews continue in-water testing in Papua New Guinea of DEEPSEA CHALLENGER, the submersible that explorer and filmmaker James Cameron will pilot to the bottom of the Mariana Trench. The vessel is the centerpiece of DEEPSEA CHALLENGE, a joint scientific project by Cameron, the National Geographic Society and Rolex to conduct deep-ocean research. Mark Thiessen
SHARE

An expedition to the deepest place on this planet is set for later this month, in a custom-built one-man sub to be helmed by Hollywood director James Cameron. The vessel Deepsea Challenge will dive to the deepest part of the Mariana Trench, seven miles into the Challenger Deep, where Cameron will shoot 3-D video.

The 26-foot-long ship was built by a team of Australian engineers and fits just one person. It has several cameras and shares qualities of a race car and a torpedo, according to National Geographic, which is sponsoring the expedition along with Rolex.

Cameron will spend about six hours at the bottom of the trench, collecting samples for scientists and shooting footage for a documentary. He just completed a series of five-mile-deep untethered test dives off Papua New Guinea and is readying for the real thing later this month. Cameron says the mission is meant to inspire interest in the oceans and in exploration.

Suspiciously absent from the discussion is any mention of new footage for an “Avatar” sequel, which supposedly will be set in the oceans. But that’s probably OK.

The director could become only the third person to dive to the bottom of the Mariana, following then-Navy lieutenant Don Walsh and Swiss oceanographer Jacques Piccard, who made the dive in a bathyscaphe called Trieste Jan. 23, 1960. The Deepsea Challenger would be the first manned vessel to reach the Challenger Deep.

Cameron could soon have plenty of company, however — as we read last week, Richard Branson’s Virgin Oceanic venture is also building a sub that can withstand the deep’s 1,100 atmospheres of pressure. Google CEO Eric Schmidt has donated money to marine technology company DOER Marine to build another ship, according to the BBC. But if Cameron’s trip goes to plan, he’ll be first, and along with glory he could win an X Prize.

Nat Geo built a nice website for the expedition, with plenty of photos and background on the mission — click here to see their coverage. 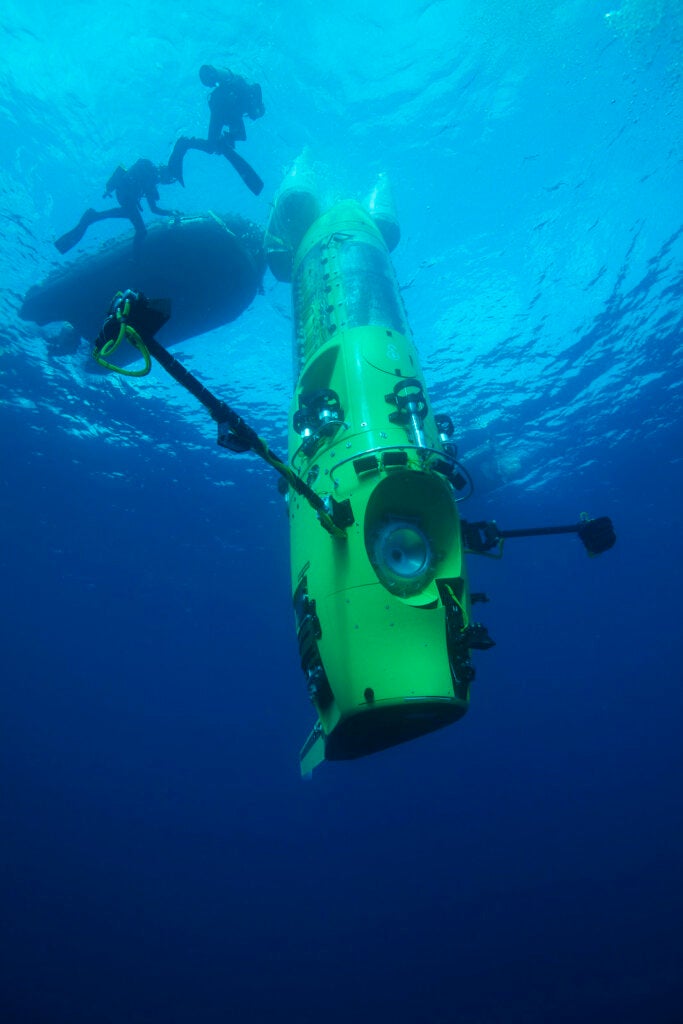