Measure everything from acceleration to magnetic fields 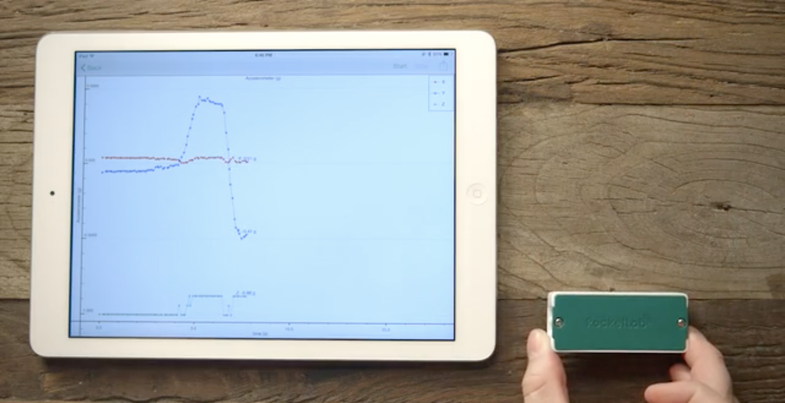 From what I remember of my high school physics class, we spent a lot of time rolling marbles down inclined planes. Today’s kids are used to a little more tech, so the Pocket Lab project on Kickstarter wants to spice up science class by developing a small wireless sensor that can gather data from experiments.

The Pocket Lab measures just 2.65 inches long by 0.65 inches wide by 1.15 inches tall, but it contains an accelerometer, a gyroscope, a magnetometer, and pressure and temperature sensors. It can sample the data it collects 50 times per second—even recording from multiple sensors at once—and send that information back to a tablet, smartphone, or computer via Bluetooth. Obviously, you’d want such a device to be pretty durable, too. Pocket Lab’s creators say it can withstand up to a 6-foot drop in its protective case.

What’s cool about the Pocket Lab, to my mind, is its versatility. Because it handles everything from sticking the device into a soccer ball to measure its velocity to tracking the speed and altitude of a model rocket, it encourages students to come up with clever experiments to take advantage of the Pocket Lab’s many capabilities.

My cousin, a high-school science teacher, says the Pocket Lab could be used for almost his entire physics curriculum, from checking out magnetic fields around their home to acceleration experiments involving running and stopping. But most of all, he thinks a device like this could allow students to design their own experiments and actually help get them excited about science.

Of course, students and educators aren’t the only ones who might be interested in such a device. Folks designing their own projects at home might also be able to incorporate the Pocket Lab’s many sensors into their inventions.

Pocket Lab will cost around $100 when it ships this summer.